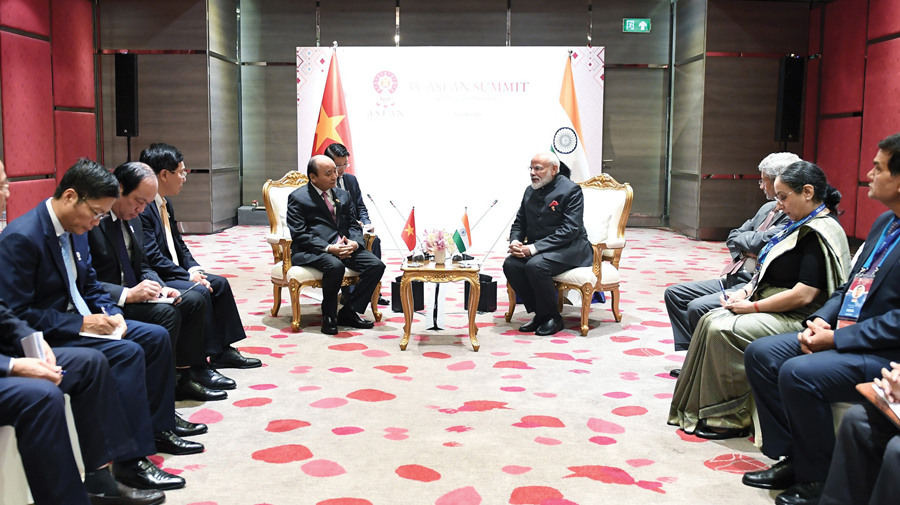 India’s relations with Vietnam are based on a long history of cultural ties that have continued to evolve on the bases of shared and sustained cooperation between the two nations. In our modern history, our shared anti-imperialist struggle laid the foundation for Vietnam-India relations. Even before official diplomatic ties were established in 1972, India supported Vietnam anti-colonial struggle during its independence movement. During the Cold War period, India supported Hanoi’s “Four Points” for resolving the Vietnam conflict, while coming out strongly against the emergence of SEATO, which India believed to be directed against Vietnam. Further, India also supported Vietnam during the Kampuchea crisis in the late 1970s.

These events have helped shape Vietnam’s perception of India as a reliable strategic partner in order for Hanoi to meet its regional strategic interest. While Vietnam has been keen on India taking on a bigger role in terms of security in the region and supported its membership in the East Asia Summit. This traditional relationship enjoyed between India and Vietnam has helped in the building of strategic cooperation between the two nations. Further, the ‘open door’ reforms launched by Vietnam in 1986 and the ‘look east’ policy announced by India in 1994; transformed both nations’ foreign policy and provided opportunities to further strengthen their bilateral relations.

In the post Cold War period both nations began to deepen their strategic cooperation with defence emerging as a major area of cooperation. The first Memorandum of Understanding was signed in 1994, a formal Defence Protocol in March 2000 where both nations signed agreements on joint military exercises, joint campaigns on anti-piracy in the South China Sea and anti-insurgency training. In 2003 a Joint Declaration was signed which binds both nations to conduct periodic high-ranking visits including the expansion of cooperation in the defence and security spheres. The signing of the MoU on Defence Cooperation by the two Defence Ministers in November 2009 has helped build closer interaction between the two nations through regular defence dialogue, training, exercises, Navy and Coast Guard ship visits, along with the capacity building.

The continued and increasing bilateral defence cooperation enabled the establishment of the Strategic Partnership in 2007 which was elevated to a Comprehensive Strategic Partnership [CSP] in September 2016, during the visit of India’s Prime Minister to Vietnam. Further, a Line of Credit of US $ 500 million for defence industry cooperation was also announced during the visit. The establishment of the CSP indicates the prevailing level of mutual trust as well as the necessity given the new security challenges of the 21st century.

Since the establishment of our Strategic Partnership and the CSP there has been progress in the bilateral defence cooperation that included exchange of high-level visits to Viet Nam by the Indian National Security Advisor in April 2015 and the Minister of Defence in June 2016, and June 2018. There have also been reciprocal visits from the Vietnamese side that includes the Vietnamese Minister of National Defence May 2015 and December 2016 and the more recent visit of Vietnam Chief of the General Staff General Phan Van Giang in November 2019, during which issues of mutual strategic concerns were discussed. Both nations have also had their first Security Dialogue which was held in July 2018.

Apart from regular visits of high-ranking military delegations, the two countries have built ties on the procurement of weaponry and military hardware, capacity building, collaboration in the area of warship building and repair. In terms of maritime cooperation, Indian ships have been regularly making friendly port calls to Vietnam. In February 2016, for the very first time, a Vietnamese ship participated in the International Fleet Review at Vishakhapatnam. Further, both nations have signed MoU on Cyber Security to enhance cooperation in the non-traditional security domain, along with enhancing cooperation in the area of counter-terrorism, transnational crimes, and disaster management and response.

Though the established India-Vietnam Comprehensive Strategic partnership, it provides new areas for bilateral collaboration in the area of aerospace, biotechnology, chemical goods, automotive, renewable energy, and so on. India and Vietnam has already been cooperating with each other in the field of science and technology which dates back to 1978 when the Agreement on Bilateral Cooperation in S&T was signed between the two countries. Over the course of the years that followed it has resulted in thirteen joint ventures. These included in the fields of information and technology, agriculture, animal husbandry, remote sensing and environmental protection. On August 12, 1999, both countries concluded a formal Protocol on Cooperation on Information Technology, with a Centre for Development of Advanced Computing [C-DAC] for research and development in High Performance Computing being set up at the Vietnam-India Advanced Resource Centre in the Information and Communication Technology in Hanoi. In 2010, Vietnam’s Ministry of Science and Technology and India’s Department of Science and Technology started collaborating in biotechnology, bio-

informatics, material science, oceanography, meteorology, medicine, pharmaceuticals, and non-conventional energy. In September 2016, India and Vietnam has also signed an agreement for collaboration in the realm of exploration of outer space for peaceful purposes.

During the visit of India’s President, Mr Ram Nath Kovind to Vietnam in November 2018, both sides agreed to effectively implement the Joint Vision Statement on Viet Nam – India Defence Cooperation for the period of 2015-2020. They agreed to step up cooperation in human resources training, and promote collaboration between the Army, Air Force, Naval and Coast Guard of the two countries, as well as strengthen cooperation in other maritime domain including anti-piracy, security of sea lanes, and exchange of white shipping etc. The Vice President of India, Mr M Venkaiah Naidu, during his visit to Vietnam in May 2019, reiterated its importance to India as a civilisational friend, a trusted partner, and a strategic pillar of India’s Act East Policy. During the visit, both sides agreed to further strengthen the bilateral cooperation in defence and security, peaceful uses of atomic energy and outer space, science and technology, oil and gas, renewable energy, infrastructure development, agriculture and innovation-based sectors.

India-Vietnam strategic cooperation would be crucial for maintaining peace, stability, growth, and prosperity in the region. For instance both nations have underlined the importance of maintaining peace and stability, and peaceful solutions of disputes, in accordance with international law, including the 1982 United Nations Convention on the Law of the Sea [UNCLOS]. On the South China Sea issue, both nations have underscored the need to fully and effectively implement the Declaration on the Conduct of Parties in the East Vietnam Sea [DOC] and the establishment of a Code of Conduct [COC] in the South China Sea. As India and Vietnam geographically lie at the heart of the emerging Indo-Pacific construct, both would play a major role in this strategic space which is becoming a core theatre for competition for power and influence amongst the major powers. Through the further deepening of our bilateral strategic ties based on our shared interests and principles, this partnership would play an important and constructive role towards a stable, inclusive, and prosperous region. The strategic partnership under the broad India-Vietnam cooperation framework would be critical towards building the vision laid out under India’s ‘Act East’ Policy, which looks to expand engagement that is mutually positive and which ensures an inclusive growth for all in the region.