India and the ASEAN: Natural Partners 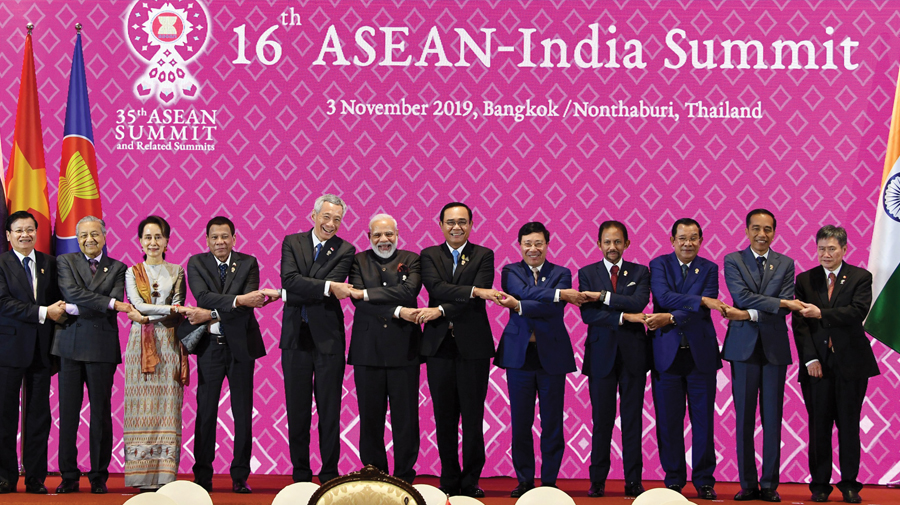 India and the Association of Southeast Asian Nations (ASEAN) are close partners, and together they can contribute positively to International politics. India and Southeast Asia share similar worldviews – both are for multipolar, rule-based world order. India and Southeast Asia also believe in maintaining robust economic growth. Socially and culturally too Southeast Asia and India has much in common. Temples in Thailand, the celebration of Indian festivals like Diwali, performances of Ramayana in several countries of Southeast Asia exhibit this closeness. Explaining the India-Southeast Asia relations Prof. S.D Muni and Rahul Mishra divided it into seven waves. According to Muni and Mishra, the first was the ancient Hindu-Buddhist influence; second was the Islamic wave, the third wave was the British era, the fourth wave was led by Nehru, post-Nehru is the fifth wave, the sixth wave is India’s Look East policy, and the seventh wave is the Act East policy of the Modi government.

The post-colonial India under the first Prime Minster Jawaharlal Nehru gave a call for Asian solidarity. In this Jawaharlal Nehru was personally taken a keen interest in expanding New Delhi footprints in different regions, particularly in Southeast Asia. India had supported Burma after its independence in 1948, and Nehru advocated decolonisation of Indonesia. Several Southeast Asian countries also joined the call of India to establish a Non-Alignment Movement (NAM) to keep the developing countries out of bloc politics. Still, the Cold War finally gripped Southeast Asia and India due to its strong commitment to NAM somewhat ignored the region. Thus, during the Cold War period, India and Southeast Asia failed to build strong political and economic relations despite the socio-cultural affinity.

The end of the Cold War gives rise to a new world order. The post-Cold War world order was more about globalisation. The old ideological divides of the Cold-War era vanished, paving the way for cooperation between the states. India also accepted this new reality and started looking for new friends and partners in the world. In this, reviving traditional partnerships with ASEAN was the natural choice for India. Moving forward, India declared Look East (1991) as one of the primary pillars of its foreign policy. As a part of Look East policy India started developing a closer partnership with ASEAN and also approached countries of the Southeast Asian region for building stronger bilateral ties. With a clear policy framework on Southeast Asia, India soon established a sectoral dialogue partnership with ASEAN in 1992. This sectoral dialogue partnership was elevated to full dialogue partnership in 1995. Thereafter, both sides realised the potential of working together and further enhanced their partnership to summit level. Considering the positive development in the India-ASEAN ties, New Delhi came up with the Act East policy in November 2014. Act East policy is a reflection of New Delhi’s consistent approach towards Southeast Asia. The relevance of ASEAN for New Delhi could be estimated by the fact that India has established a separate mission to ASEAN.

Considering the changing nature of international politics, where regionalism is slowly taking over the earlier enthusiasm of globalisation, India-ASEAN relations needs to mature further. New Delhi is working hard on some critical regional initiatives involving Southeast Asian countries like BIMSTEC. India is also committed to bring development to its Northeastern region and for this relation with Southeast Asian countries is key. India is working on several connectivity projects, that will link India via the Northeastern part to Southeast Asia. Once these connectivity projects become operational, the India-ASEAN will also reduce the physical distance. These connectivity projects will also boost both trade and people to people connection between the two sides. As per the figure of the Indian government –“India’s trade with ASEAN stands as US$ 81.33 billion”. ASEAN is India’s fourth-largest trading partner, and this figure is likely to get changed after the starting of connectivity projects.

It is to be noted that India-ASEAN relations are not directed against any third party. At times analysts try to project, India – ASEAN relations as a counter to China. This is a miscalculation and New Delhi time and again reiterated that Sino-India relations are not about the rivalry. Thus, we shall not read India-ASEAN as a strategic and political pole. India and ASEAN are committed for democratic world order and are closely working to ensure this, but this is not to say that they are opposed to any particular country or a region.

Lastly, a discussion about India-ASEAN relations cannot conclude without a mention of people-to-people ties. Southeast Asian countries are one of the most favourite travel destinations of Indians. As per a report, the number of Indian tourists going to different Southeast countries is on the rise. It was 2.48 million in 2010; the number has now increased to 4.67 million. Likewise, to promote tourism between the two sides, 2019 was declared as the ASEAN-India year of tourism. Apart from tourism, it is a known fact that Indian movies are top-rated in Southeast countries. The other area of people to people cooperation that has potential is education. India has world-renowned institutions of higher education; similarly, there are popular learning centres in Southeast Asia. This opens a gateway to cooperate in the educational sector. This will open space for academic and intellectual collaboration that is presently not very strong. India and ASEAN can together support different centres in some universities in India and in Southeast Asian countries to

study various dimensions of India-ASEAN relations. Research collaboration in the area of science and technology is also essential. In India, at Nalanda university, there is a BIMSTEC centre. The Indian government also give BIMSTEC scholarship to students from the region.

There has been up and downs in the India-ASEAN relations still something has never changed, and that is cultural similarities and love of people for each other. The people of India and ASEAN easily affiliate with one another, and it is the biggest strength of this partnership. In the post-Cold War phase, India and ASEAN covered miles in terms of strengthening their friendship and hopefully this will continue in the future.