Food Security for India and Africa 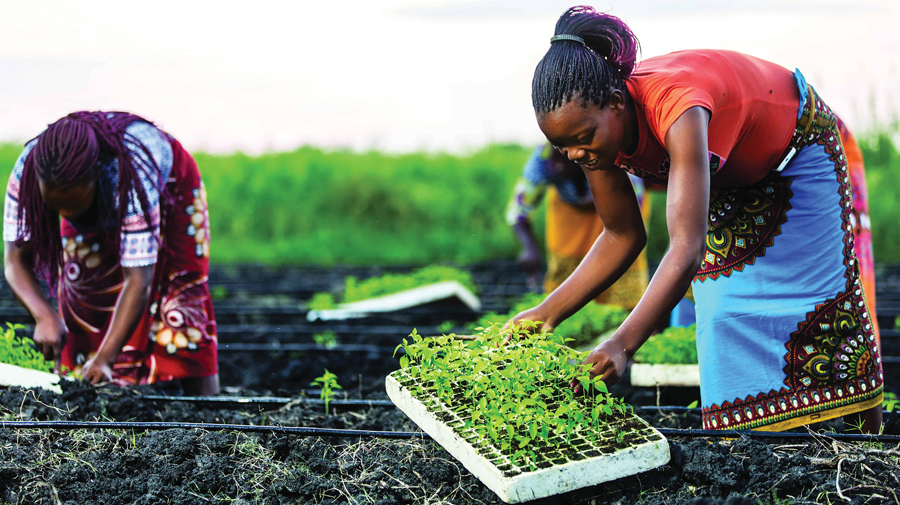 India and Africa share historical ties and many commonalities including a colonial past. The African continent, straddling India’s neighbourhood in the Indian Ocean, comprises 54 nations with a population of around 1.1 billion people and, like India, faces common threats including poverty, illiteracy, hunger, food insecurity, terrorism and the pernicious effects of climate change. In the last few years, India and Africa have broadened and intensified their engagement spanning the entire gamut of bilateral relations.

An important area of increasing cooperation between India and Africa is Food Security and was a key aspect of all three India-Africa Summits held in 2008, 2011 and 2015. In the 2011 Summit, the two sides affirmed their commitment to cooperate to improve agricultural productivity and output and achieve the millennium development goal (MDG) of halving the proportion of people who suffer from hunger and under nutrition by 2015. In the 2015 Summit, both sides pledged to improve farming techniques through affordable technologies, use of better crop varieties and irrigation facilities, and promote investment in agri-business and food processing industries. However, despite relatively high economic growths in India and in Africa, food security remains a challenge with a large number of people continuing to being malnourished and going hungry with both sides failing to meet the MDGs target set for 2015.

The African Development Bank (AfDB) in 2016 launched the “Feed Africa” project to transform and scale up agriculture as a business through value addition to end hunger and rural poverty by 2025. India is well equipped to partner with Africa to achieve the goal of the “Feed Africa” programme and move towards food security for Africa.

The concept of food security is an evolving one and needs to be understood. The World Food Summit in 1996 agreed on a definition saying ‘Food Security exists when all people, at all times, have physical, social and economic access to sufficient, safe and nutritious food which meets their dietary needs and food preferences for an active and healthy life’. Food Security is a priority in the development agenda for both India and Africa as they grapple with the challenges of poverty, hunger, under nutrition, and productivity in the agriculture sector. Together, India and Africa account for about 50 percent of the world’s undernourished in spite of lifting millions out of poverty.

However, India’s experience with the Green Revolution and its adoption of advances in agro-tech, drip irrigation, R&D, etc. led to high productivity with yields almost double that of sub-Saharan Africa, though lower than the advanced countries. Though, India became self-sufficient in cereals like wheat and rice, oilseeds and about 4-5 million tonnes of pulses were required to be imported annually. Africa has around 60 percent of the world’s available arable land but only 5-7 percent of the land is irrigated, leaving it open to the vagaries of nature. In addition, inefficient use of resources, fragmented land holdings and low productivity have resulted in Africa not being able to meet its basic food needs. There is hence a need for diversification of existing crops and actualising the potential to become a global supplier of traditional cash crops (cocoa, sugar and tea) as well as growing sufficient food crops for internal consumption in Africa to meet its food needs and export the surpluses. India’s food security for pulses could be met through growing the requisite quantities of pulses and oilseeds in Africa under the PPP model or through lease of agricultural land to Indian agri-investors.

Despite many remarkable developments and improvements in the Agricultural and livestock sectors in Africa, challenges remain and India and Africa could work together to find affordable and viable solutions to overcome the challenges to achieving food security by using improved seeds, fertilizers, machinery, technology and innovative methods of production, marketing and export. Given that India has strengths in the use of technology in agriculture to boost productivity and reduce costs, both sides could work together in the Agri-Tech, Dairy and Food Processing sectors. India could share its vast experience across the Agri value chain and its frugal engineering technologies to assist in mechanisation, sustainable agriculture and to increase productivity in order to attain food self-sufficiency. Indian farming equipment, tractors, tools and cost-effective technology could be adapted for reducing post-harvest losses, value addition to agricultural and dairy products and to improve irrigation practices and systems. Micro-irrigation projects could be replicated across the continent to enable crop growing throughout the year along with water harvesting projects to conserve water in the hilly terrains of Africa.

To prevent food wastage, Food Processing Units could be set up either as joint ventures or under Government schemes and surplus products could be exported to India which would certainly be a win-win for both sides.

India could learn from Africa, their best practices in rural development and agriculture as enunciated by the Indian Prime Minister and both sides could identify areas of synergy to further enhance cooperation in the Agricultural sector so that Food Security is ensured for both India and Africa.

*Author is former Indian Ambassador to Madagascar and Comoros

Amb. Manju Seth
Author is a career diplomat, retired from the Indian Foreign Service in 2014. A former Ambassador and Consul General of India, her last assignment was as Ambassador of India to Madagascar and Comoros.
Tags:
India Africa Farming Agriculture AFDB cooperation FoodSecurity FoodProcessing
Share:
Share this...