Diplomatist > Regions > Africa > Agriculture: The Backbone of The African Economy

Agriculture: The Backbone of The African Economy 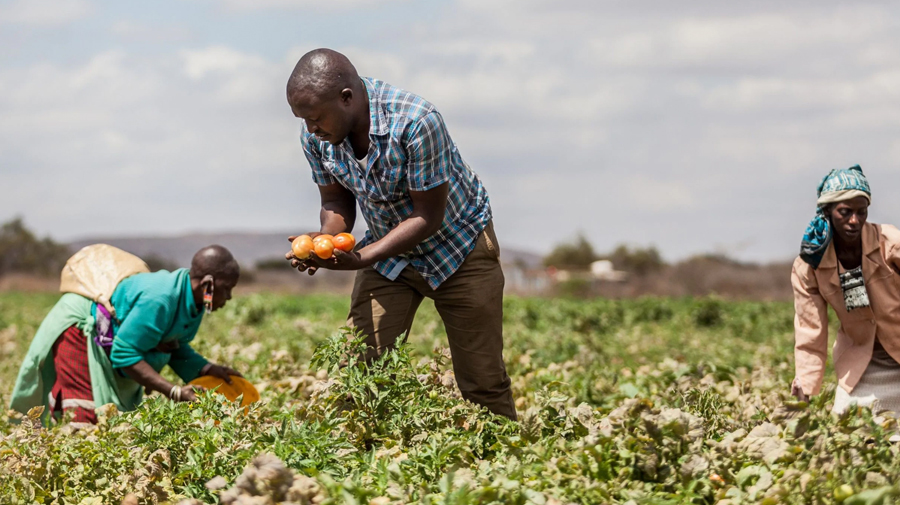 Agricultural production, of both crop and animal husbandry, has been part and parcel of the livelihoods of African societies since about 8,000 BCE (Before the Common Era). The early focus was on the production of cereals (such as wheat, millet, and sorghum) and root crops (especially yams). There was also a transition towards the domestication of wild animals such as cattle, goats, sheep, and camels. Such transitions occurred in different phases in various parts of the continent. To date, agriculture remains the backbone of most sub-Saharan African economies, contributing an average of about 25 percent of the Gross Domestic Product (GDP).

Since its inception, agricultural production has had significant impacts on African economies. In the early years, the impacts include: (a) helped African societies to living in larger and more permanent settlements; (b) led to the significant increase in population, mainly due to the abundance of food supply; (c) the development of sophisticated tools, such as the stone axe; and (d) settled societies also began to require forms of social organization, cooperation, and planning. Furthermore, those that produced surplus food often had the liberty to do trade with other trading partners. Such activities often led to the establishment of administrative structures and authorities, now known as “chiefs,” in most parts of the continent.

Agricultural production and African economies during the colonial era

From the last quarter of the 19th century to the mid-1960s, most African countries as we know them today (except for Liberia), were placed under European colonial rule. The major European powers involved included Great Britain, France, Belgium, Portugal, and Germany. These were involved in the “the scramble and partition of Africa,” whose climax was the Berlin Conference of 1884-1885. It was in Berlin where the modern boundaries of the various states in the continent were drawn.

Just like India, most of the African countries attained their independence in the two decades following the end of the Second World War in 1945. The independent states generally retained the agriculture of their economies. The new governments encouraged and opened new opportunities for peasant cash crop production mainly to satisfy international markets. The proceeds from the sales would, in turn, be used to among other things, settle public debts; pay for state administration, and to serve as a source of foreign exchange earnings. For instance, for the period between 1965 and 1980, the economies of sub-Saharan African countries grew at an average of 1.5 percent per year of GDP. This mainly came from agricultural earnings.

From the late 1970s onwards, however, most sub-Saharan African states experienced an economic downturn. The factors behind this were wide-ranging, including the high global oil prices; huge external debts incurred by most governments; the underperformance of state-owned companies (known as “parastatals”); and the rapid population growth in most countries. One of the sectors that was hit the hardest by this economic crisis was the agricultural sector, especially the production of food crops. This came as a result of several factors, including state discouragement of smallholder peasant production; low prices offered by state-run agricultural marketing companies; and the decay of transport systems for agricultural products. As a result, some parts of the continent have continued to experience food shortages, where statistics indicate that as of the second decade of the 21st century, 25 percent of the undernourished people in the world live in Africa.

Instead of overly focusing on urban development, government budgets must divert more funds to the agricultural sector. Such funds would go towards the purchase of agricultural inputs (especially seeds and fertilizers); the purchase of farm machinery (especially tractors); and the purchase of irrigation equipment (especially treadle pumps); and the transportation of agricultural produce from the rural areas. African governments must also see to it that their citizens (peasant farmers) are not over-emphasizing on cash crop production. This over-emphasis, which has its origins from the colonial period, has led to food shortages in many African countries, where sometimes the people have the money to buy food but have no access to markets for the foodstuffs. Furthermore, even the food crops must be commercialized to fetch better prices in both local and international markets. More funds should also be channeled towards capacity building for African farmers.

What Africa can learn and benefit from India

African countries have a lot to learn from India, a country that over its recent history has attained food self-sufficiency. Since the 1960s, Indian governments have been responsible for tackling the problem of food shortages through pro “green revolution” policies. This involves significant government intervention agriculture by providing subsidies for seeds and other inputs; research into improved agricultural input production (especially seeds and fertilizers); and setting up industries focusing on producing farm machinery (such as tractors and irrigation equipment). Many of these have over the years come through the “5-year plans,” set by the Indian government. The agriculture sector must be set up as one of the major business sectors, to include setting attainable goals; providing easy access to markets for smallholder farmers; and adding value to agricultural products. Indian can assist in such sectors as capacity building; the provision of farm machinery; and communication means with which to reach rural African farmers. This will complement the efforts being taken by regional bodies, the African Union (AU), and NEPAD (New Partnership for African Development) in bringing back agricultural development to the forefront of the development agenda targeting 1.2 billion Africans.

* The author is a Historian, currently based at West Virginia University. He specializes in Malawi’s political and economic history, and Africa’s relations with the Indian Ocean World.