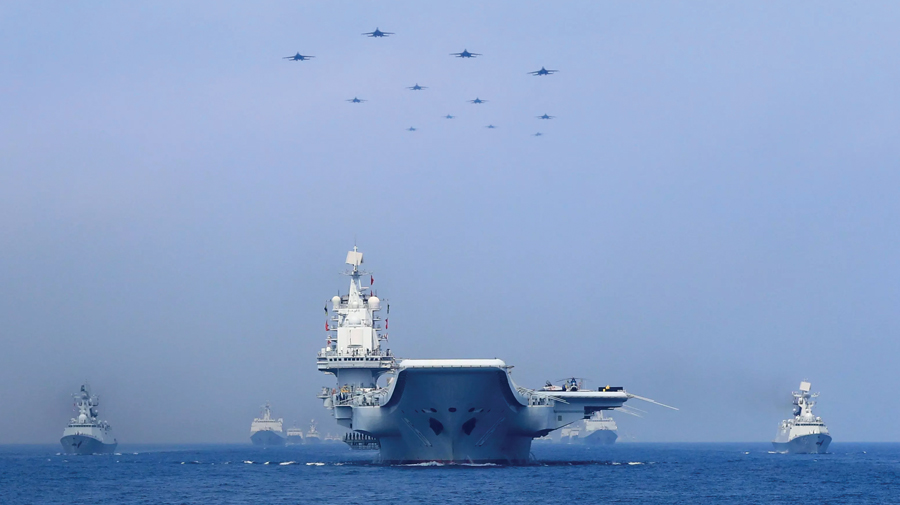 The South China Sea has perhaps established itself as among the most live regions in the world today. While China’s weight is being felt all across the world, it is arguably felt most intensely in the South China Sea. Tensions in the region are comprised of overlapping maritime territorial claims and have existed for decades. China claims much of the waters and the area claimed by the country is referred to as the nine-dash line and also an extended version is known as the eleven dash line. The problem stems from the fact that the nine-dash line also covers areas which are claimed by Vietnam, the Philippines, Malaysia, Indonesia and Brunei. And Beijing’s claims are also in contravention with international maritime law as the area claimed is well beyond the internationally agreed to zone of 200 nautical miles allotted to each littoral country.

But international law has seldom deterred Beijing from undertaking several forms of measures all of which are directed at establishing and expanding its presence and control of the disputed waters. Over the course of the last decade, Beijing has begun to systematically exert its influence through the reclamation of the small islands and atolls that dot the South China Sea and by deploying naval vessels on a regular basis to the waters. Termed as ‘tolerance warfare’ or ‘salami-slicing’, these acts are intended to test the boundaries of resolve among littoral as well as other countries as Beijing goes about advancing and consolidating its presence.

The construction activities which also include the building of airstrips, warehouses and other installations that have a distinct naval and military connotation, have and continue to advance at a rapid pace. In December 2019, the country’s first indigenously developed aircraft carrier, the Shandong (Type 002) was inducted into the People’s Liberation Army Navy (PLAN) fleet and it is more than an upgraded version of the Liaoning (Type 001) which was refitted from the old Soviet Kuznetsov class Varyag. While the Liaoning has played the role of an evaluation vessel with the Shandong is believed to be utilized for operational purposes despite having limitations in comparison to American counterparts and will also be an important prototype for more advanced carriers that Beijing would undoubtedly be developing shortly. Tiffs between the US and China have become quite common with the former flying B52 bombers over the Sea and the latter sending patrol and naval vessels into waters which are under law beyond its territory. The most recent incident took place over the Chinese Lunar New Year holiday when Beijing reacted against the presence of the USS Montgomery near the disputed Spratly islands which the US countered by stating that the ship was merely exercising its navigational rights.

It is interesting to note that while the littorals of the South China Sea have had varying approaches towards Beijing’s advances, there is a consolidation of opinion and approaches taking place. Vietnam and the Philippines have been the most vocal in calling out Chinese actions although, under the leadership of Duterte, the approach has been oscillating between hot and cold. Vietnam has cultivated stronger defence ties with the US and the US is also treaty-bound to step in the event of a conflict which involves the Philippines. Indonesia and Malaysia have generally tended to downplay maritime incidents with China but that appears to be changing as well. Jakarta recently sent 10 naval ships and four F-16 fighters to the Natuna islands which lie inside China’s nine-dash line but are located within Indonesia’s exclusive economic zone. Malaysia too joined the list of countries that appear to be no longer willing to sidestep or elicit a subdued response on issues of conflicting maritime territorial sovereignty with China and submitted a petition to the United Nations Commission on the Limits of the Continental Shelf (CLCS) to extend its continental shelf.

The most vital – albeit elementary – indication that there is a convergence of opinion regarding China’s actions is perhaps the ASEAN Outlook on the Indo-Pacific adopted by the regional organization last year. Typically, as an institution, ASEAN has sought to keep itself at a distance on matters relating to the South China Sea and narratives that lend to the strategic containment of Beijing while at the same time making general statements regarding the maintenance of freedom of navigation and maritime peace and stability. The Outlook is a departure from this position as it signals the incorporation of the ‘Indo-Pacific’ into the organisation’s strategic framework.

It is understandable that the utilization of pressure tactics only will not be a sufficient deterring force against China. And this is precisely why the littorals of the South China Sea are making the issue multilateral as opposed to a bilateral one. Beijing has insisted for decades that the maritime disputes be settled bilaterally which would allow it to employ asymmetries of power and advantage. It is imperative that littoral countries as well powers external to the region develop stronger institutional mechanisms that add weight to the preservation of a rules-based maritime order. While a convergence of strategic approaches towards the South China Sea issue seems to be taking shape gradually, what is required in addition is the creation of requisite incentives which would make it complicated and costly for Beijing to ignore. In other words, offering Beijing reasons persuasive enough for it to buy into the framework of international law and order.

1 reply on “Converging Strategies in the South China Sea?”