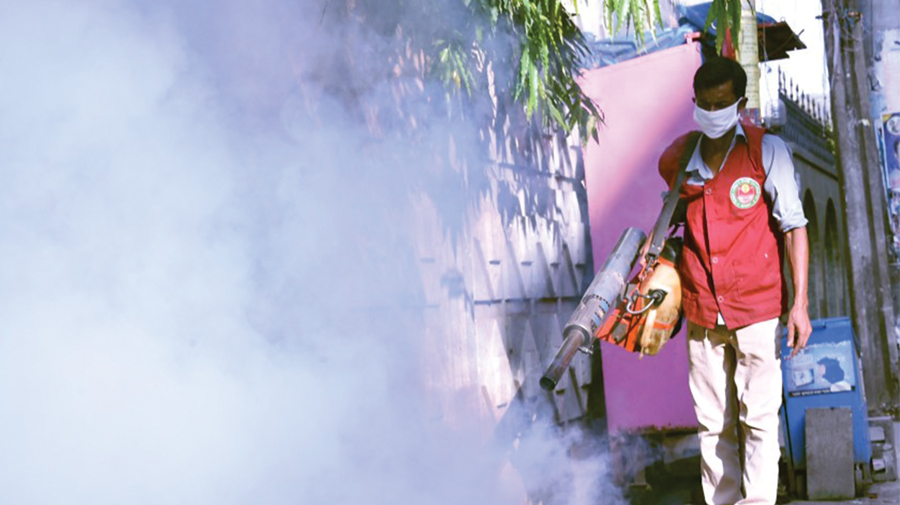 The escalating dengue situation in Bangladesh has been emerging as a serious public health problem. The upsurge in dengue cases, as well as death from the turn of 2018, continuing in 2019 is quite alarming. The Bangladesh Health Bulletin published in August 2019 reveals that since January 2019, 38,844 dengue cases have been reported till date. Around 2,176 patients have been admitted to hospital within 24 hours and the deadly disease has already claimed 29 lives while the unofficial death toll stands at 157. During 2018, a total of 10,148 people were infected with dengue and 26 of them died. Hence, Bangladesh is seeing the highest number of dengue cases since 2000. The situation had been under control due to systematic health interventions undertaken by Communicable Disease Control (CDC) under Directorate General of Health Services (DGHS) within the period of 2003 – 2017. The total cumulative number of reported cases during that period was 26,665 and deaths reported were 73. The sudden jump from 2018 onwards according to the health experts have been owing to a combination of climate change, rapid unplanned urbanisation, constructions, and lack of awareness. Therefore, Bangladesh, particularly the city of Dhaka, affected critically by dengue menace has been under severe pressure to address this distressing issue at the earliest.

The country lies adjacent to the Indian state of West Bengal which has its own burden of dengue outbreak. The situation was quite threatening in Kolkata in the first decade of the 21st century with a peak around 2005.

[i] However, the vital preventive as well as curative measures implemented by the health department of Kolkata Municipal Corporation in recent years with regard to the identification of vector breeding sites, using larvicidal spray along canals by using rowing-boats, year-long monitoring, establishment of mosquito research laboratory, increasing number of dengue detection centres, providing free blood tests, holding awareness programs, etc. have resulted in the decreasing number of cases and deaths reported in the last decade. Thus, the number of cases dwindled from 4,006 in 2005 to 1,063 in 2015-16 (figures cited are of government health sector). Furthermore, deaths have come down from 14 in 2005 to 4 in 2015-16.

Against this backdrop, Bangladesh was willing to hold talks in order to understand the model they may need to embrace in order to manage and limit the impact of this lethal disease. Hence to understand the dynamics of dengue control in similar eco-meteorological situation in general and Kolkata model in particular, Md. Tajul Islam, Minister of Local Government and Rural Development, Bangladesh along with a team from Bangladesh visited Kolkata at the beginning of August 2019. He met with Firhad Hakim, Mayor, Kolkata, Atin Ghosh, Deputy Mayor and Mayor – in – Council Member in charge of the health department of Kolkata as well as other senior officials of the Health Department of Kolkata Municipal Corporation (KMC) to discuss ways to control the dengue burden plaguing the nation. Subsequently, another high-profile video conference call was held between the key officials from both the sides where KMC shared their knowledge of managing and controlling dengue.

Bangladesh later acknowledged Kolkata Municipal Corporation’s valuable contribution in controlling their dengue situation during a Mayors Summit held at Dusseldorf (Germany) in September 2019. They have invited Kolkata health experts to visit their country in order to share their successful experience to control the disease.

Clearly this may act as an important stepping stone to strengthen the bilateral ties between both the nations in the health sector.

There already exists well-placed medical tourism between both the nations. As one enters Bongaon, West Bengal, crossing the international border from Bangladesh, the person is welcomed by a chain of hoardings advertising series of private health care facilities based in Kolkata. It fringes apparently to woo the patients coming from the Bangladeshi side, provided the fact that 50 percent medical tourists in India came from Bangladesh in 2017.

Tapan Roy, Director of ATN Medicare, an organisation exclusively built up to organize and facilitate the medical treatments of Bangladeshi people in India states that it gets about 20 patients per day on average. They have contacts with medical institutions all over the country including language support, often a major deterrent for average Bangladeshi person to communicate outside Kolkata.

Though it is true that thousands of Bangladeshi patients travel to India for treatment and many Indian students go to Bangladesh to study medical sciences but unfortunately, the health sector cooperation between the two countries has not been able to generate the expected momentum. Very few MoUs have been signed by both sides which would have helped in seeing the desired progress. There is a need to speed up substantial cooperation in the realms of the health sector between the two countries by putting public health collaboration high on the agenda. There is an immense need in health sector collaboration in the area of the joint venture, joint advanced medical research through formal agreements with long-term targets, pharma production, disease surveillance, exchange of medical professionals for sharing the experiences, etc.

In this regard, bilateral collaboration to limit and eliminate the vector-borne diseases has never been considered and thus should have been taken into consideration as well as discussed at a larger depth.

Increased population mobility and opening up of multiple channels of international trade and communication heighten the risk of the transmission of infectious diseases across borders. The dengue virus is transmitted to humans via the bite of an infected Aedes aegypti mosquito. This dengue virus is then spread through a human-to-mosquito-to-human cycle of transmission. After an Aedes mosquito feeds on the blood of someone infected with the dengue virus, that mosquito becomes a dengue vector and this vicious cycle continues. As a result, a person may carry the infection from one place to another during the stage when the virus circulates and reproduces in the blood system, thus enhancing the chance of the disease to spread.

An example of the ASEAN nations can be relevant here. In order to combat this issue, there has been bilateral and multilateral collaborations between ASEAN nations. Dengue is endemic in many countries in the ASEAN Region. The ASEAN Strategic Framework for Health Development and the Expert Group on Communicable Diseases further puts focus on dengue and malaria. Prevention and control programmes for dengue in this area have been strengthened with greater community-based participation, improved surveillance and reporting mechanisms, enhanced engagement of relevant stakeholders especially from the private sector, and progressive developments in vaccine development. United in Tackling Epidemic Dengue (UNITEDengue) network a part of ASEAN focuses on the cross-border sharing of dengue surveillance information and knowledge of dengue control. It provides its members up-to-date disease incidence, virus surveillance information and a lucid key for mosquito identification.

Furthermore, the Taiwan Centers for Disease Control (CDC) which has a well-developed medical system and public health networks has started the New Southbound Dengue Prevention and Control Collaboration Program. This program entails the organization of training workshops, the creation of disease response teams to conduct practical exchanges, sharing of Taiwan’s experiences in disease surveillance, health education, community involvement, and clinical treatment with Indonesia. It is hoped that such efforts can help bolster regional health care networks and safeguard the well-being of the people of both sides.

Thus taking a page from here, India and Bangladesh can prepare collaborative mechanisms that may help both sides to control this deadly disease.

For instance, across border Regional Dengue Prevention and Control Program may be shaped keeping in mind the issue and needs of both the nations. This is important as not only both regions share similar meteorological attributes, and hence the similarity in vector breeding mode; but also high volume inter-region movements maximise the risk of spreading the disease from one to another. Hence regular interface meetings and workshops using the collaborative program as a pivot may help both regions.

Secondly, disease response teams, under the aegis of collaborative exercise, may also be formed where health experts, community workers as well as NGOs/ FBOs from both the side conduct practical exchanges, share knowledge/experiences and success stories concerning disease surveillance, health education, community involvement, and clinical treatment.

Thirdly, there should be a concerted effort towards improving database for vectors and vector-borne diseases as well as sharing of some data between both the nations to enhance and strengthen disease surveillance. Proper health checks near border posts may be established which will help maintain records.

Fourthly, the role of the state as well as other institutional actors in laying the groundwork for cross border disease control strategies stands vital.  Allocation of funds in this regard becomes imperative for the new sector to enhance and thrive.

Thus, a robust dengue health collaborative apparatus will be crucial to ensure the well-being of people on both sides of the border and will further enhance the health care systems between both the nations.

*The article is co-authored by Anasua Basu Ray Choudhury and Jayanta Basu.