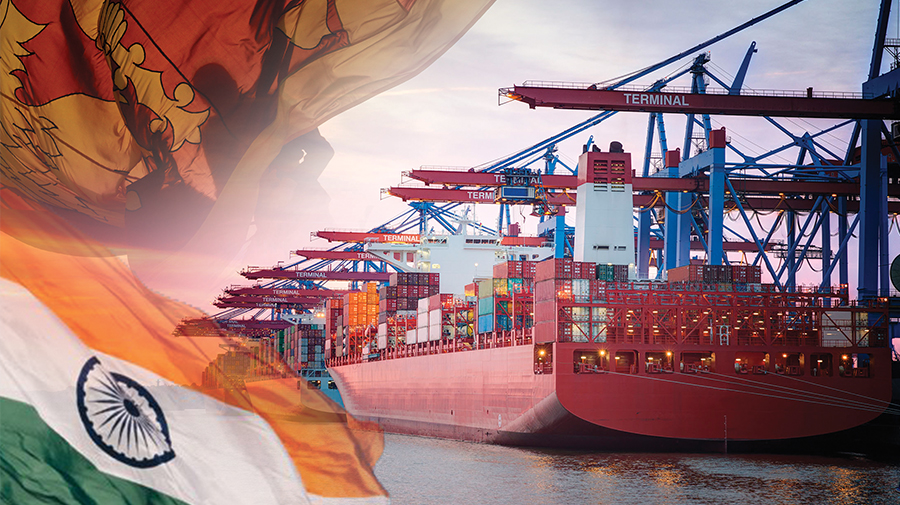 The relationship between India and Sri Lanka is more than 2,500 years old and built upon a shared legacy of cultural, intellectual, religious and linguistic association. Both countries enjoy a strong economic and commercial partnership, with bilateral trade growing rapidly in the last decade and a number of leading Indian private sector companies investing in Sri Lanka. Recently, there have been talks between both countries to upgrade the existing India-Sri Lanka Free Trade Agreement (operational since March 2000) to an Economic and Technical Cooperation Agreement.

Against this background, this article briefly provides an overview of the evolution of trade policy framework governing India-Sri Lanka bilateral trade; assesses the trade performance between the two countries and identifies trade possibilities, especially in the context of growing competition from China in the Sri Lankan market.

In order to enhance bilateral trade, India and Sri Lanka signed the India-Sri Lanka Free Trade Agreement (ISFTA) on 28th December 1998 which came into force on 1st March 2000. The ISFTA provides duty-free access and duty preferences to goods, barring those which are on the Negative List. The Negative List comprises of 431 products from India’s side and 1,220 products from Sri Lanka’s side. In addition, India imposed a Tariff Rate Quota (TRQ) on garments (8 million pieces) and tea (15 million kg) and specified ports of entry for these items to qualify for preferential tariffs. India also added the condition that Sri Lanka would have to source fabric for 6 of the 8 million pieces of apparel articles from India to qualify for the preferential tariff. Over the last few years, there have been several amendments to the agreement. For example, port restrictions for imports from Sri Lanka have been removed. In the case of import of garments, the condition of fabric being sourced from India has been removed. The only condition that remains is that the total quantity of imports must not exceed 3 million pieces on a list of 210 items of garments.

Soon after signing of the ISFTA, both countries agreed that there was a need to widen the ambit of the agreement to go beyond trade in goods to include services and to facilitate greater investment flow between the two countries. Accordingly, a Joint Study Group (JSG) was set up in April 2003 to make recommendations on how to take the two countries beyond trade andachieve greater economic integration through the conclusion of a Comprehensive Economic Partnership Agreement (CEPA). The JSG submitted its report in October 2003 and recommended that scope of the agreement should be expanded to include trade facilitation and Non-Tariff Barriers, include service and facilitate investments and cooperation in areas such as infrastructure, tourism, education and ICT. Based on the recommendations of the JSG, both governments started negotiating a CEPA in February 2005. However, due to reservations expressed by some stakeholders in Sri Lankan, CEPA negotiations came to a halt in 2008.

Recently with the change of government in Sri Lanka in 2015, talks once again resumed under a new framework called the ‘Economic and Technological Cooperation Agreement’ (ETCA). The ETCA agreement seeks to boost cooperation in technical areas, scientific expertise and research amongst institutions, boost standards of goods and services able to compete on the global market and improve opportunities for manpower training and human resource development. In order to address the key concerns of Sri Lankan stakeholders (which prevented the signing of the CEPA), particularly those related to services i.e. movement of professionals, India is planning to send professionals into the IT sector and shipbuilding, where there is a need for expertise and higher levels of training. These are also sectors that could boost Sri Lanka’s exports. There are also discussions regarding the signing of Mutual Recognition Agreements in the goods sector to improve market access for Sri Lankan products into India. The signing and enforcement of ETCA will be a crucial reform towards an improved economic partnership with Sri Lanka.

In 2018-19, India’s top 3 exports to Sri Lanka at the HS-2 level of classification included mineral fuels, ships and boats, and vehicles accounting for 43 percent of total exports to Sri Lanka.  India’s top 3 imports included ships and boats, residues and waste from the food industries, and coffee, tea, mate and spices accounting for 56 percent of total imports.

India’s exports to Sri Lanka are losing their competitiveness vis-a-vis China’s exports to Sri Lanka. China is expected to overtake India soon to become Sri Lanka’s largest trading partner, especially for imports. The trade challenge that India is facing today is largely structural in nature. While tariff concessions, fiscal incentives and schemes can work in boosting exports, a more effective measure could be to identify sectors where India has a comparative advantage in Sri Lankan market and work towards making them competitive. Our analysis suggests that there is export potential in commodities such as machinery, mechanical appliances, electrical equipment and parts, textiles, vehicles, aircraft, vessels and base metals and articles thereof. In addition, there is potential to enhance India’s export capabilities in the ships, boats and floating structures sector. Sri Lanka’s trade data suggests that total imports of ships, boats and floating structures have increased by more than eighty times over the past decade. It is important to note here that China’s share in Sri Lanka’s import of this commodity has significantly augmented from 1 percent in 2007 to 96 percent in 2017, thus making China the single largest import source of ships, boats and floating structures for Sri Lanka. India’s global exports of this commodity was about US$ 4.6 billion in 2017, but its share in Sri Lanka’s imports of this commodity was less than 1 percent. This is definitely one commodity that has a growing demand in Sri Lanka where India can boost its export capabilities.

India and Sri Lanka should finalize and sign the ETCA in a timely manner. The agreement will not only help strengthen the bilateral trade relationship, but it will also enable Indian manufacturers to establish their operations in Sri Lanka and use it as a base to export their products to other countries. The ETCA can also enable Sri Lanka to become a part of India’s supply chain and forge closer production linkages through the expansion of trade and investment flows.