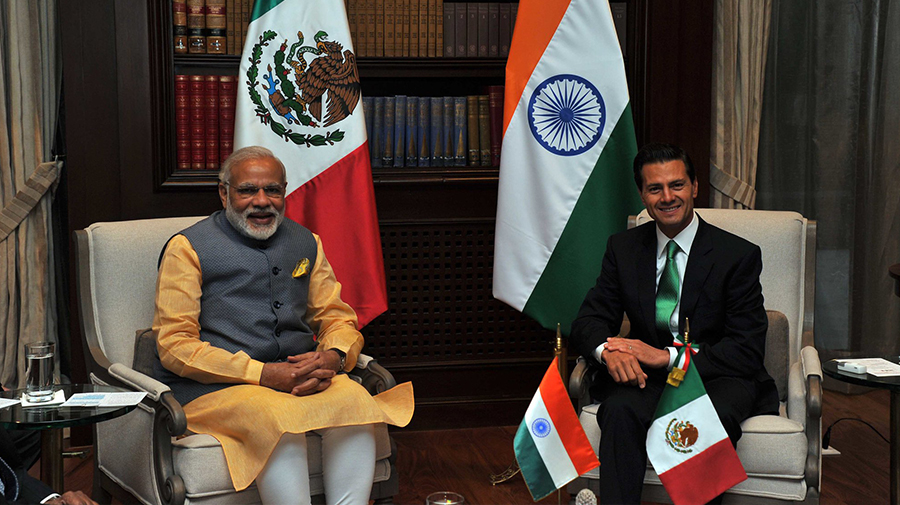 India’s relations with Mexico were established in 1950 when India announced that its Ambassador to the United States would be accredited to Mexico. India deepened its ties with Mexico after Prime Minister Jawaharlal Nehru’s first visit to Mexico in 1961 followed by President Adolfo LópezMateos to India leading to the signing of joint communiqués on bilateral cultural and economic cooperation. Mexico at the time evinced interest in the trajectory of India’s path of economic and social development post-independence.  During the decades of the 1950s and 60s, Mexico and India like other developing countries were passing through similar pangs of development with discussions rife on the Import Substitution Industrialization (ISI) strategy and the role of the state.

India’s political relations with Mexico have always been warm and cordial. Given their cultural affinities with civilizational histories along with similar social values and attitudes, the two countries despite their geographical distance have mutual affinities. Both countries are democracies with diverse secular societies. They are emerging economies with similar development priorities, which has meant that there is a lot of scope for further political and economic ties. India’s leading figures such as Mahatma Gandhi, Rabindranath Tagore, Jawaharlal Nehru are well known in Mexico and Octavio Paz, the Mexican diplomat stationed in New Delhi in the decade of the 1960s, left his imprint on India. Paz himself was deeply in India’s thrall, as is reflected in his writings.

Despite cordial relations, Mexico has not always been supportive of India in international affairs expressing concern over two main issues—nuclear non-proliferation and a permanent seat at the United Nations Security Council (UNSC). Mexico along with about forty other countries was part of an informal “coffee club” formed in 1995, that opposed India’s bid for a permanent seat at the UNSC. Most members of the club were middle-sized states opposing bigger regional powers such as Brazil in the Latin American region. India and Brazil are part of G4 (India, Brazil, Japan and Germany) formed in 2005 that put in a joint bid for membership as permanent members of the UNSC.

These issues, however, did not seem to dampen the spirit of the two countries as the relations have received a boost in the twenty-first century. In 2007 India and Mexico signed a ‘Privileged Partnership’ with President Felipe Calderon and Prime Minister Manmohan Singh identifying areas such as development, North-South dialogue, environment, human rights and disarmament. In 2010, an ‘Octavio Paz’ Chair for Indian Studies was established by the Indian Council for Cultural Relations at the Centre for Asian and African Studies, El Colegio de Mexico (MEA 2014). Prime Minister Manmohan Singh visited Mexico in June 2012, to attend the G 20 summit. But the first bilateral prime ministerial visit to Mexico in three decades was that of NarendraModi to Mexico City in 2016. It was in this meeting that the two countries agreed that they would convert their relationship from a ‘privileged’ one to a ‘strategic partnership’. Mexico also supported India’s bid for becoming a member of the Nuclear Supplier Group (NSG). President Pena Nieto’s special gesture of personally driving Modi to a Mexican restaurant did not go unnoticed.

According to Gilberto Harris (2015: 129), since 2007, Mexico and India are reframing their “engagement in strategic rather than normative terms, as they have focused on increasing commerce ties and technological and environmental cooperation while carefully avoiding contentious normative issues”. During Modi’s visit to Mexico in 2016, the two countries pledged to promote an effective multilateral system and pursue the common goals of nuclear disarmament and non-proliferation, and cooperation on international security issues including a strong condemnation of terrorism. Areas of partnership that were identified included the promotion of trade and commerce, deepening cooperation in space and science and technology, agricultural research, biotechnology, waste management, disaster management and solar energy.

There has been a rapid increase in trade between Latin American countries and India, but it has been limited to a handful of countries such as Venezuela, Mexico and Brazil. In 2018, Mexico accounted for 21% of total Latin American exports to India and absorbed 29% of all exports from India (IDB 2019). Thus Mexico became India’s top trading partner in Latin America and India was for the first time among the top ten commercial partners of Mexico, the bilateral trade in 2018 reaching more than US $ 10 billion, quadruple that of 2009 (Salas, 2019). This rise is admirable considering that there was negligible trade between the two countries at the beginning of the century, the main Latin American partners for India at the time being Argentina, Brazil and Chile.

In addition, Mexico’s trade pattern with India is very different compared to the rest of the Latin American countries that export mostly extractive (72%) or agricultural products (19%). Industrial manufacturers accounted for only 9%.  This is because of its industrial integration with the United States. Crude oil has been the main product exported by Mexico to India. Mexico’s exports to India, in contrast, are lower for extractive and agricultural products (39% each) and industrial manufacturers are 22% (IDB 2019: 17). India is the second-biggest supplier of motorcars and other transport vehicles for Mexico after the US.

There has not been much of Latin American and Caribbean (LAC) foreign direct investments (FDI) in India. The total LAC inflows between 2000 and 2018 was US$ 505 million representing 0.1% of inward FDI in India. Chile (US$ 151.93 million) and Mexico (US$132.88 million) are responsible for a large share of the FDI in India. Indian investment inflows between 2008-2018 was about US$ 704 million representing about 1% of total outward equity investment. It has been mostly directed to Brazil, Bahamas, Panama and Colombia followed by Mexico (IDB 2019: 22). However, Indian interests in Mexico have been rapidly rising. According to Indian ambassador MukteshPardeshi, at the end of 2017, Mexico had an estimated USD 2 billion in capital investment from about 180 Indian firms, creating about 30,000 jobs for Mexican nationals in IT, pharmaceuticals and automotive industries (PWC Mexico 2018).

This augurs well for the two countries. The positive cultural synergies between India and Mexico and their common aspirations of development seem to be adding to what appears to be a more business-oriented approach in this new era. Whatever may have been the contrasting stand on issues of global governance, “paradoxically…reveal many more similarities than differences in their aspirations to construct a more just, equal and less discriminatory international society” (Harris, 2015: 128). These similarities are now well on the way to becoming concretized through commercial, scientific and technical agreements.