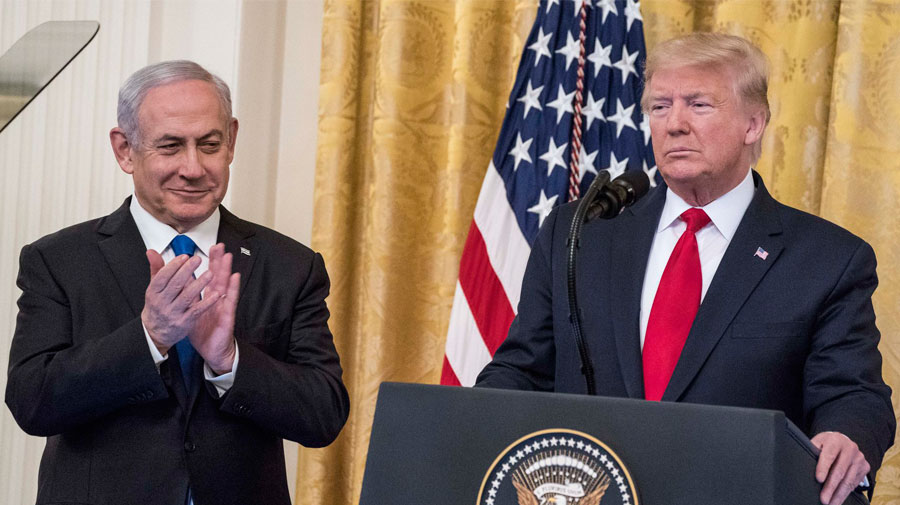 When the entire plan popularly termed as Trumps Middle east Peace plan itself is anchored in transactory business terms of buying off and selling through, it seems pertinent to begin any analysis of this deal in those very business terminologies – the Plan, indeed, is an eye-catching advertisement meant to bail out the faltering enterprise of the Trump Netanyahu combine by packaging the deal in the peace dividend terms. Crafted by Jared Kushner, a real estate developer and Trump’s son in Law and David Friedman, US Ambassador to Israel and former Trump’s bankruptcy attorney, the Deal truly captures the basic ideology of businessman Trump, representing his business acumen, financial insight and economic determinism. The Deal is meant as a trade-off to balance the sinking image of two most powerful people, the main architect of this plan Trump and Netanyahu, the former beset in impeachment proceedings, the latter, recently indicted on corruption charges. That is the reason, this deal self proclaimedly touted by the proposers as the ‘Deal of the Century’, is responded to on the ground by the epithet ‘Slap of the Century’ by those for whom it is meant.

While the pros and cons of the deal have been and are still being debated fiercely on various socio-political and eco-Psyco-cultural counts, one missing aspect which has failed to get the required attention is the plight of this region in its natural setting as a result of the deal. It is important because the tone and tenor this region is talked about and imagined owes a lot among others to its ‘natural’ being. The economic underpinning of any initiative must take into account the existing everyday reality and here is where nature counts. Thomas L Friedman, in his column in NY Times, brought this aspect by getting this different perspective on this deal by hypothesizing Mother nature’s response, which has been a silent spectator to all the troubles and tribulations this region has been witnessing since times immemorial, to the deal:

“So, Mother Nature, what did you think of the Deal of the Century?

Well, Tom, not a lot. For starters, it mentioned me in only a few short sentences. Let me take you on a tour of the neighborhood, as I see it. Warning: My maps have no boundary lines, no walls — and no Areas A, B and C in the West Bank.

You can be sure that President Trump, who has declared climate change a hoax, has no idea that the Eastern Mediterranean has experienced drought conditions for 15 of the last 20 years, which is unparalleled in the modern historical record. A recent study by Tel Aviv University predicts that the Eastern Mediterranean will get steadily hotter and drier and gradually lose two months of winter – i.e., rainfall months –  within the next 25 years. Meanwhile, in 1948 Israel’s population was 800,000. It’s now 8.7 million. Jordan’s was 450,000. It’s now 10 million. Syria’s was three million, and it’s now 17.5 million. So, the future is steadily more people and less water.”

“So what would be Mother Nature’s peace principles?

To begin, any plan that carves up the West Bank into siloed political spaces, walls and roads — driven by a Trump-Kushner desire to embrace the “reality” of where Jewish settlers have haphazardly settled around the West Bank — makes no sense to me. This is a single ecosystem, and there will be no physical security for one if there is not human security for all. More than once my flash floods have knocked down Israel’s security barrier around Tulkarm and Jerusalem.

This hypothetical interview of Mother nature on the Trumps Deal points to the basic issues which this deal has flagrantly flounced even at the cost of sounding realistically impractical. While it goes to the audacity of Trump administration only that one could say the past experiences should not be accounted at all in formulating any strategy for a region and the one as troubled and as chequered as the Middle East, the suggestion for multi-million investment to barter a people’s sovereignty could also only be proffered by someone suffering from business fetishism. Moreover, again, it could also only be a real estate developer who would have the temerity to claim some plan to be distinctly unique despite actually just repackaging the past initiatives.  The real stakeholders of any deal are the main actors whose opinion should count much in any analysis of the success or otherwise of any deal. Without going into the nitty-gritty of the deal, a cursory analysis of the responses of the real stakeholders of the Deal may thus be a good beginning to analyse the Deal. Here, for the Middle East Plan, the real and the foremost stakeholders are Israeli and the Palestinian people with others, the immediate and extended neighbours, the regional and global powers, etc., only being secondary in importance. Though the Deal formally termed as “Peace to Prosperity: A Vision to Improve the Lives of the Palestinian and Israeli people” but in reality is anything but this from the targeted peoples perspective.  Richard N Haas, the prescient International relations expert perceptively tweeted “ Middle East Peace must be between two peoples, Israel and Palestinian not between two people @realDonaldTrump and @IsraeliPM.”

Any Deal to be successful needs to take care of the concerns of all the involved parties, the least in differing degrees only, even if a semblance of neutrality and not the real impartiality is to be maintained. However, the Deal in question from the beginning till the end, in terms of drafting, consultation, discussions, etc., have given priority to one party so obviously captured when the deal was finally unveiled on camera. Netanyahu one of the party was standing side-by-side with the Trump with his face brimming with confidence showcasing his sides arrogantly clear victory. Foreign Affairs, the otherwise pro-establishment international relations journal was discerning enough to capture this feeling and thus it wrote; “Past US mediators, however, tried to establish a basis for agreement y bridging the disparate position of the two sides. The Trump team simply resolved the issue by sleight of hand: it decided each of the final issues – border, security, Jerusalem, refugees, and mutual recognition – in Israels’ favour before the negotiation even begins.”

That precisely is the reason, apart from Palestinian authority, the Arab League unanimously and unambiguously rejected the deal in its entirety. Even the Organisation of Islamic Cooperation, which has developed an image of in-house differences and acrimony has unanimously rejected the Plan.

The Trump’s Middle East Plan is, therefore, not just bad in intent, atrocious in suggestion, arrogant in expectation but it is also representative of the declining American image, so rapidly spiraling downwards into the abyss that a redress seems an impossibility in the near future.