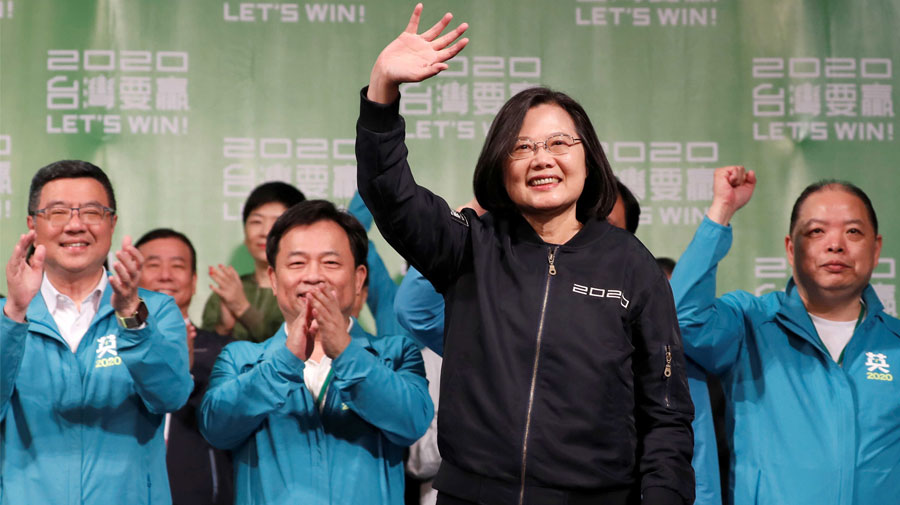 Tsai Ing-Wenn and her Democratic Progressive Party (DPP) scored a decisive victory over her main opponent Han Kuo yu of the Kuomintang party (KMT), generally known to be close to Beijing in the recently held elections on 11 Jan 2020. This victory was not expected last year when her popularity was down among the majority of the voters. Opinion polls held in mid-2018 shown that Tsai’s rivals in her party were challenging her position in the Party. During the midterm elections Han Kuo-yu, KMT’s presidential candidate took the mayorship of key southern city Kaohsiung, traditionally a pro-DPP stronghold.  However, unprecedented protests in Hong Kong by large sections of citizens, especially the vast majority of youth, as well as other global events including the ongoing trade rivalry between the United States led by an unpredictable President Donald Trump and a China-dominated by an assertive party leader Xi Jinping, substantially influenced the later developments.

However, President Xi intends to keep the brotherly relations with Taiwan. Keeping this in mind he remarked that, “no force could separate us (China and Taiwan) despite gusts of wind and rain and longtime isolation from each other because we are brothers whose bones are broken but tendons are still connected, and we are a family whose blood is thicker than water”.  The present-day younger generation Taiwanese and DPP do not agree with this brotherly sentiment.

Events in Hong Kong played a significant role in inspiring the democratic aspirations of a large number of the citizens of Taiwan. Since last June, more than six thousand people have been arrested in Hong Kong protests and many of them face up to 10 years of imprisonment for rioting offenses.

In this election, Tsai secured 8.17 million votes (57.13 percent of ballots cast), the largest number ever for a candidate since direct presidential elections introduced in 1996. On the other hand in the overall Legislative Yuan (Assembly) elections her Party DPP could only score 61 seats, seven seats less than the last term. The main opposition KMT gained three seats more and have a total of 38 seats out of the total 113 seats. In its initial reaction, the Chinese State Councils’s Taiwan office stated that it would continue to pursue the one country, two systems model for the unification of Taiwan with the mainland.

These results will certainly have major implications for Taiwan and its neighbourhood in Asia at large and the world over.  Within Taiwan, the stress will be more on asserting its democratic rights as an independent sovereign state in contrast to the totalitarian system followed in mainland China by its communist rulers. In her victory speech, Tsai Ing-wen stressed that ‘ Taiwan is showing the world how much we cherish our free democratic way of life and how much we cherish our nation.”  Further, she pointed out that “Peace’ means that China must abandon threats of force against Taiwan. ‘Parity’ means that neither side of the Taiwan Strait should deny the fact of the other’s existence. ‘Democracy’ means that the future of Taiwan must be decided by our country’s 23 million people. ‘Dialogue’ means that we must be able to sit down and discuss the future development of cross-strait relations.”

In contrast to this solemn assertion by the DPP leadership, mainland China under its assertive leader Xi and the Communist ruling elite is not likely to accept these conditions. For the Chinese leadership, the main worry will be to pacify their restive population, especially the young generations in Hong Kong and other troublesome territories.

Beyond this political rhetoric, the real worry for both sides will be their longstanding economic interaction. Since the early nineteen nineties when both sides agreed for economic investments across the straits, till the end of 2015 it is estimated that an amount of over 150 billion US dollars was invested in mainland China by the Taiwanese business community. This amount has steadily increased further. However, during the last few years under Tsai’s first tenure as president has certainly reduced this flow of business investments. During KMT rule in the 2008 -16 period nearly 70 percent of Taiwan’s global foreign direct investment was in China, under the DPP rule in the last four years this figure has dropped to 43 percent.  Yet, a large number of small and large business establishments have created a variety of business and diaspora inspired interests in mainland China.

Taiwan’s growing indigenous identity must worry about the Communist authorities in Beijing. According to recent surveys conducted by the China Impact Studies group at Academia Sinica, a leading think tank of Taiwan, more than 73 percent of respondents did not want Taiwan to “unify with the mainland China even if it arrives at the same level of economic and political development as Taiwan”. Among respondents ages 20 -34, the figure exceeded 93 percent.

Since President Trump took power in the United States in 2016 the business and strategic rivalry between the US and China have exacerbated largely. Definitely. This rivalry has adversely affected the international supply chains for business and industry in Which China played a key role. This has also upset the calculations of trade and industrial groups involved in the thriving cross-straits businesses. Further, President Trump has permitted to sell 66 F-16 fighter planes and advanced defence equipments to Taiwan, which has certainly improved the defence capability of Taiwan against its main rival mainland China.

The DPP greatly values the democratic traditions of India, therefore our authorities in India must look forward to improving our relations further with the island nation, Taiwan. After we established our bilateral relations in the mid-1990s Taiwanese business people have invested in certain areas of manufacturing and processing industries. This needs to be strengthened further. Some of the Taiwanese mobile handset brands have become very popular among Indians. One of the largest business conglomerates of Taiwan, the Foxconn Technology group have plans to mass-produce Apple iPhones in India. Therefore, India must make full use of the technological and business potential of Taiwan.