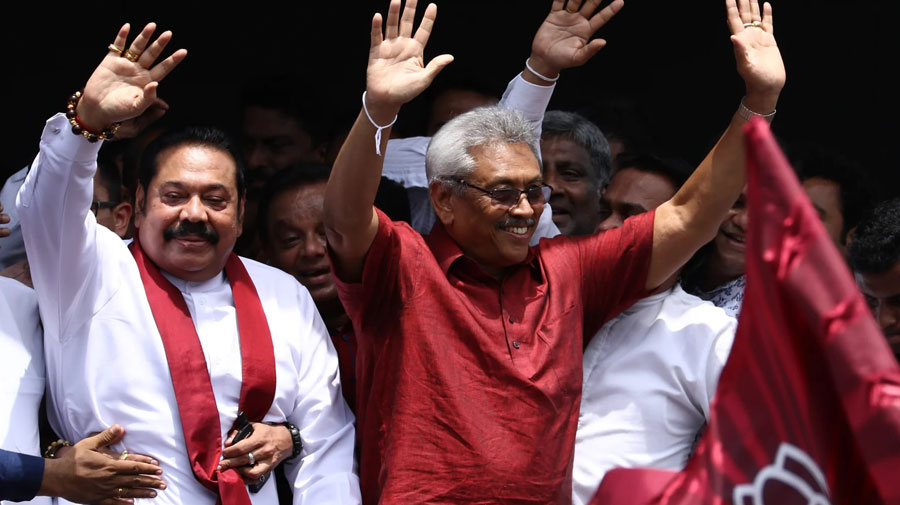 Gotabaya Rajapaksa was elected as the President of Sri Lanka in the recently held Presidential elections on November 16, 2019. With his victory by securing 52.25 percent votes polled, Rajapaksa family is back in power, as he appointed his brother Mahinda Rajapaksa as Prime Minister and Finance Minister and Chamal Rajapaksa as the Defence Minister to run the caretaker government. Earlier when Rajapaksas were in power during 2005-2014, the administration was accused of nepotism, corruption, suppressing media, undermining democracy and following a biased foreign policy towards China in its international affairs. While the relationship with China flourished, the relations with India declined during the second tenure of Mahinda Rajapaksa’s presidency. When Mahinda Rajapaksa lost in 2015 Presidential elections, the Rajapaksas accused India of playing a role in regime change. Nonetheless, prior to 2019 Presidential elections, Rajapaksa brothers and their loyalists had reached out to the government of India and acknowledged the fact that mistakes were committed while pursuing their relationships with India. Gotabaya Rajapaksa has also emphasised on the point that his administration would rectify the foreign policy mistakes committed by Mahinda Rajapaksa administration and follow a more balanced policy. During his maiden visit to India, Gotabaya Rajapaksa, however, hinted that India must invest more if it wants to stop Chinese investment in Sri Lanka. The question to ponder, therefore, is, does India have enough resource and intentions to stop Chinese investment in India. The answer is emphatic no. India’s main concern is China-funded strategic projects in Sri Lanka which might affect India’s security interests. Therefore, India seeks assurance and commitment from Gotabaya administration that Sri Lanka will be mindful about India’s security sensitivities while dealing with China. While the verbal commitment has been provided by the Rajapaksas, this essay argues that China will always be preferred due to strategic, political and economic reasons.

Sri Lanka has a sense of fear, vulnerability and insecurity from India due to the power and size asymmetry. During the cold war period, it was believed that due to strategic interests India had imperialistic design towards Sri Lanka. Since its independence, it tried to address its misperceived threat from India and security concerns about strategic autonomy by getting closer with extra-regional powers- first with Great Britain and then the USA. In the post-cold war period, though the threat from India has significantly reduced, a section in Sri Lanka still doubts India’s intention and expresses concerns about maintaining the country’s strategic autonomy.

In the current context, Sri Lanka perceives the threat to its strategic autonomy mostly coming from the west, USA and India. Both India and the USA are regarded as joining hands to pursue their strategic interests in the island. China, on the other hand, seen as a non-interfering nation. China’s interests and presence in the island is considered as benign. Many in Sri Lanka rejects the view that China pursues any kind of debt trap policy by funding and investing large scale projects under its Belt and Road Initiative (BRI). As it is believed that no strings are attached to the Chinese financial support, proximity to China, is considered by the Rajapaksas as necessary to address its concerns about strategic autonomy.

Gotabaya Rajapaksa came to power with the votes from the majority Sinhala community. On the day of his elections, he announced himself as President for all. Nevertheless, in his policy statement made at the Parliament on January 3, 2020, he talked about the importance of respecting the aspirations of majority. As large section of Sinhala community is averse to the Tamil demands for Federalism, President Rajapaksa has committed to defending the unitary status of the country. The National Unity government’s decision to co-sponsoring the United Nations Human Rights Council (UNHRC) resolution was vehemently criticised by the Sinhala nationalists. As a nationalist himself, Gotabaya Rajapaksa too has talked about reviewing the UNHRC resolution. Like the Mahinda Rajapaksa administration during 2010-14, Gotabaya Rajapaksa administration too is looking at the Tamil issues more as economic problem then a political one. While the focus of the current administration would be to the economic development of the north and east, political demands of the Tamils, in all probability, will be ignored. In such circumstances, India, the US and EU would constantly raise the issues of minority, human rights and democracy in the island in their engagement with Sri Lanka. While, support and cooperation of these countries would likely to be conditional, Gotabaya Rajapaksa administration would get unconditional support from China, as long as Chinese interests in the island are protected.

China considers Sri Lanka as one of the crucial partners of its BRI. Sri Lanka became part of the BRI during Mahinda Rajapaksa’s Presidency. Under Gotabaya Rajapaksa, China-Sri Lanka partnership under the BRI is going to enhance as infrastructure development is the top priority of the current administration. Even though, as members of Joint Opposition during the NUG rule from 2015-19, Rajapaksas opposed the government’s deal with China on Hambantota Port and Special Economic Zone, it is unlikely that the current government would review the project. Sri Lanka has experienced the consequences in 2015/16 of reviewing and suspending the Chinese funded projects. China not only threatened to stop future investment but also levied huge compensation charges for cancelling the projects by the NUG. Therefore, the current administration is not going to offend its most trusted friend by reviewing any of the Chinese funded projects. In addition to strategic and political reason, Chinese assistance is required to implement the economic vision of President Gotabaya Rajapaksa. Other than China, no country has a pocket to make adequate investment in Sri Lanka to meet the government’s infrastructure goals. India has not only resource crunch, but also has to face opposition within Sri Lanka to make the investment in large scale projects. The Sinahala nationalists are extremely sensitive about India funded infrastructure projects, particularly the projects with strategic importance. Development of upper oil tank farm at Trincomalee by India is being protested in Sri Lanka. During the previous administration, Prime Minister Ranil Wickremesinghe made an effort to convince the domestic constituency in favour of the project. But it is unlikely that Gotabaya Rajapaksa will go that extra mile for India as he clearly said that he would respect the aspiration of the majority who have voted for him.

Through the BRI, China has not only increased its investment in the infrastructure development in the country, but has enhanced its relations in all aspects of bilateral ties. Very soon it is going to be the largest trading partner of Sri Lanka surpassing India. Cooperation in the tourism sector has increased manifold. China-Sri Lanka security cooperation is also gradually increasing. China-Sri Lanka relations are going to deepen under Gotabaya Rajapaksa in all spheres. There is no way India can shield Gotabaya from getting closer to China.

Nonetheless, due to its geographic locations and capabilities in the region, India has its own relevance for Sri Lanka. Despite the suspicion, no leader can ignore the importance of India. Even Rajapaksas have seen the consequences of ignoring India in 2015. Sri Lanka’s security and stability to a great extent depend on its cordial relations with India. As security is the top agenda of Gotabaya Rajapaksa, India still has not lost its leverage in Sri Lanka. India may not stop increasing Chinese presence in the island, but it can protect its own security and strategic interests by using this leverage.