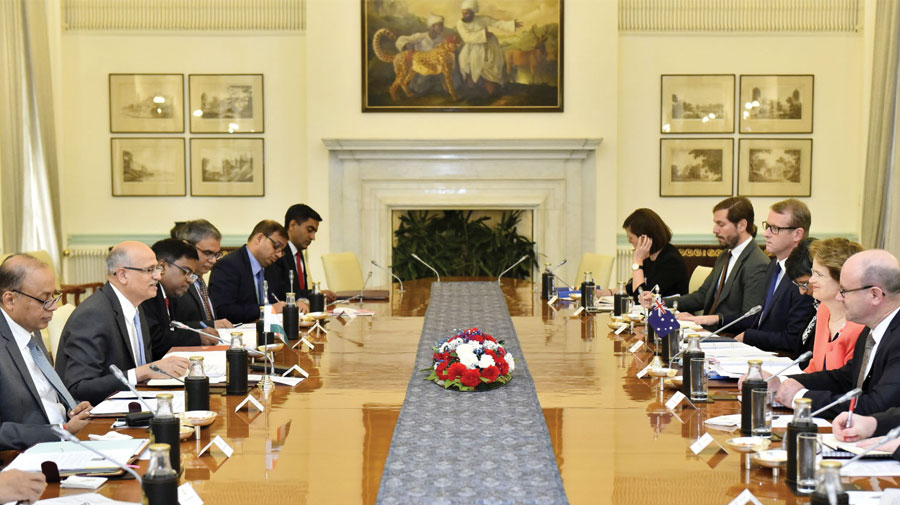 The high-level meeting of defence and foreign ministers; the ‘2+2 dialogue’ between India and Australia is a step towards deepening relations which has far-fetched implications for the Indo-Pacific region. The Logistics Support Agreement (LSA) is one of the most important deals coming underway. LSA enhances the navy in multitude ways; especially on the high seas to avail fuel, food, clothing, supplies and the needed infrastructure. It is similar to the Logistics Exchange Memorandum of Understanding (LEMOA) signed between India and the United States in 2016. A similar process is proceeding between India and Japan as well. The four navies are trying to work in unison with the security agenda for a peaceful, prosperous and inclusive ‘free and open’ Indo-Pacific region.

The bilateral defence and security cooperation in the fields of industry and technology made the maritime security strategy of India and Australia converge to a large extent. The relevance of their engagement has become noticeable with the frequency of these 2+2 dialogues that started in 2017. India and Australia, for too long had an idea that they are well off without being with each other; specifically due to the fact that both share a particular relationship with the United States. Interestingly India and Australia have similar threats but a different perception, approach and strategy towards it. While Australia considers itself as a middle power and China an important economic partner, but hedging China is what every country does and so is Australia; mostly due to China’s aggression on South China Sea and also being aligned to the United States. When Australia almost compromised on the dilemma of geography over history, the immediate dilemma arose of how well it could balance traditional alliance and growing economic dependence on China. China’s open threats to Australia had made it wary of how much it could actually invest in Indo-Pacific and its offshoot ‘the Quad.’  India, on the other hand, is facing a serious threat from Pakistan and China’s friendship, China Pakistan Economic Corridor (CPEC), the border disputes and terrorism and hence is fast proceeding with its agenda. India is strengthening its force posture and building its engagement with likeminded countries. Apart from this India also wants to have a pronounced role as a constructive player on the Indian Ocean. India’s power projection and maritime expansion, bilateral, trilateral partnerships and the efforts to institutionalise Indo-Pacific, ministerial meetings of Quad are some such examples. The basic assumption of Indo-Pacific is not to contain China alone but to augment regionalism for enhanced cooperation (economically, politically and socially) and interdependence to fight the conspicuous threats of terrorism and cybersecurity.

The geopolitical construct of Indo-Pacific has become the watchword and/or the basic guideline on which strategies and policies were based by the regional countries since China’s navy is fast making inroads on the Indian Ocean like the strategic ports at Djibouti, Hambantota, Gwadar, Belt and Road Initiative (BRI) and CPEC, and its increasing strength on the South China Sea. India does not have the ability to check China’s aggression single-handedly and hence needs a counter-strategy.  The strategy of Indo-Pacific with bilateral, multilateral and trilateral engagements which is not entirely security-oriented to contain China but to involve the regional countries in a strong bond is a well thought out strategy. The bid towards regionalisation of Indo-Pacific is taken up by some stakeholders of the region. The controversial and exclusive engagement between Australia, India, Japan and the United States under the ‘quadrilateral engagement’ is a case in point. While the United States and Japan are committed to it, India and Australia were apprehensive to become openly engaged within the Quad. India and Australia both were reluctant to either participate or invite each other in the naval exercises carried out by all the four countries together. But Quad has already taken its shape through the ministerial meets with the specific agenda of economic, political and strategic engagement which is seen from the 2+2 dialogue keeping in mind the immediate threat of terrorism. Thus, the institutionalisation of Quad is surely in the process. The two-decades-old Indo-Pacific construct has brought India and Australia closer. The search for areas of cooperation is still on. One of the major fears of weak cooperation, as felt by many political analysts, is a near lack of economic and trade relation between India and Australia. As a matter of fact, Australia wanted to engage with India initially; to try and find an economic alternative and less dependence on China, but somehow it did not take off. Australia shares a strong relationship with China not just in trade and economy but also has security pacts; like the High-Power Security dialogue that started in 2017. Nevertheless, the bilateral engagement between India and Australia is viewed positively in the near future. Both meet trilaterally with Japan and the United States and also Australia, India and Japan trilateral dialogues were held to enhance maritime security, surveillance or domain awareness and disaster risk management. India-Australia has helped each other in the international forums and were members in the region’s multilateral organisations like ARF, EAS which is equally crucial to make Indo-Pacific institutionalised. India and Australia share a similar view on ‘ASEAN’s centrality’ for a strong and enduring Indo-Pacific strategy, which is also emphasised by the Indian Prime Minister at the Shangrila Dialogue. Another potential area where both the countries can work together is cyber technology and should also pursue to be a member of Cyber Coalition where the United States, NATO members and Japan are connected to cybersecurity war games. The phenomenal rise of Artificial Intelligence (AI) enabled weapons is replacing the war methods of yesteryears which require expertise, technological edge and cooperation with like-minded countries. Lastly, when both countries are facing the wrath of global warming, it is the right time to be strongly engaged in collaborative efforts to promote ‘political will’ to be involved in building green infrastructure. Though people-to-people connections are quite strong between the two countries, the above factors need to be made prominent in order to strengthen the relationship in a holistic manner. The likely emerging Asian century will have Australia as a natural partner along with India, ASEAN and East Asia at a level playing field while China will be cautiously aggressive a partner.