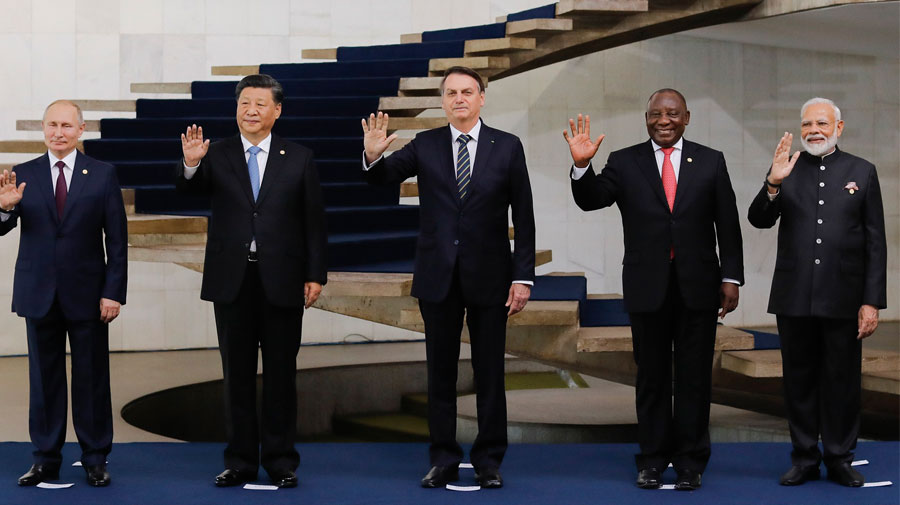 The BRICS are a peculiar group, originally formed on the basis of its members sharing the common characteristics of a large territory, big population, GDP over a certain a level and a strong will to influence global governance. South Africa was incorporated later, sharing basically the last characteristic.

The set of members comprises three old societies with a record of past armed conflicts among themselves, plus two new, geographically distant partners.

It also comprises the second biggest economy in the planet, hence a permanent, potential risk of becoming ´China plus four`, meaning by that the risk of joint decisions corresponding more directly to Chinese interest than to the interests of other members.

As reflected in the post-Summits Declarations, at the very beginning the objective of the group was quite clear, focused on the influence on global governance.

A precondition for doing so, however, is to identify common objectives among the members. That requires deeper mutual knowledge, and clearly, the Declarations following the Summits after the first one in Ekaterinburg show a significant number of initiatives in this regard, dealing with a gradually increasing number of issues.

The diversification of themes dealt with in these Declarations has stimulated readings of lack of objectives by the group. Indeed, the increasing number of Articles in the subsequent Declarations make it hard to visualize the actual targets of the group.

This diversification of themes mirrors not only the measures that could improve the degree of mutual knowledge but also – and perhaps more important – a number of initiatives aiming at intensifying the complementarity among the five members. There is a clear understanding that there is a potential to be explored in terms of exchange of experiences and joint works that might help improve competitiveness as well as satisfy basic needs of the population of the member countries.

In parallel to this mixed signalling in the several Declarations, two other elements are worth emphasizing.

In 2014 the group formally launched two unprecedented initiatives comprising participants in different regions: the CRA (contingent reserve arrangement) and the New Development Bank. These have become ´the cement` of the group: their success consolidates the group whilst their failure might negatively affect the image of the group to a probably non-recoverable level. These initiatives are to be registered on the positive side.

On the negative side, three of the five members (Brazil, Russia, South Africa) have, since the mid-2000s, presented too small, if not negative, rates of GDP growth. The very aspect that has led to the formation of the group – namely being a set of economies sufficiently big and dynamic so as to influence global dynamism – started to make no sense. Other sets of emerging economies begun to be considered as likely to have more influence on the global scenario.

With this background, the XI BRICS Summit took place in Brasília in November.

The Declaration following that Summit repeats some ´leitmotivs` found in several other such Declarations, like the urgency of the need to strengthen and reform the multilateral system, including the UN, the WTO, the IMF and other international organizations, the condemnation of terrorism, the commitment to sustainable development, the concerns with the situation in some regions, and others.

The Declaration stresses that the BRICS countries have been the main drivers of global growth over the last decade and currently represent close to a third of global output, so that continued implementation of structural reforms will enhance their growth potential. This is a strong indication that the group aims at intensifying complementary activities as a means to foster competitiveness and economic activity, given the presumed potential of the group.

One welcome dimension expressed in the Declaration is the emphasis in the importance of science, technology and innovation as one of the main drivers of economic growth. This has led to stress, in the first paragraphs of the Declaration, some achievements like the establishment of the Innovation BRICS Network and the adoption of the BRICS New Architecture on Science, Technology and Innovation. The relevance given to this dimension is indicative of the efforts that can be expected from the five countries so as to benefit from joint technological initiatives. This is indeed a new, promising trend, given that each member can provide expertise in specific areas, and some of them have already become technological frontiers in a few sectors.

The Declaration recognizes that global economic growth has weakened, and downside risks have increased, with trade tensions and policy uncertainty having affected confidence, trade, investment and growth.

This raises the question as to what extent the present global scenario, rather conflictive and with low dynamism, might affect the BRICS efforts to consolidate as a group.

Lower global growth directly affects the five members, in that it imposes limits to their external trade performance, thus constraining their rates of GDP growth.

But more important is the fact that the recent low global growth can be attributed not to supply constraints, as in previous episodes; it is, rather, to a large extent the outcome of a trade conflict in an intensity hardly seen for many years, with the by-product of implying also a weakening of the World Trade Organisation.

This is bad news for everybody, but even more so for the BRICS. These are economies that rely upon the trade discipline imposed by the WTO and on the dispute settlement mechanisms of that organisation.

Furthermore, a deepening of the trade dispute between a BRICS member and third parties might lead to the BRICS members being expected – for the sake of homogeneity of the group – to align with the affected partner versus the outsider. This is likely to be a big problem for those countries willing to remain neutral in such dispute.

In summary, the BRICS is clearly a group with a big potential that can materialize via complementary initiatives. As different from its early days, however, today it is not quite clear what are the specific objectives of the group.

To what extent the present headwinds in the global economic environment will affect the dynamism of the group is still to be seen. There are potential possibilities following from more intense collaboration within the group in a number of areas, which could improve competitiveness and provide a shield against external shocks. At the same time, however, there are opportunities and risks stemming from the international scenario. The net outcome for the five economies is still hard to predict.