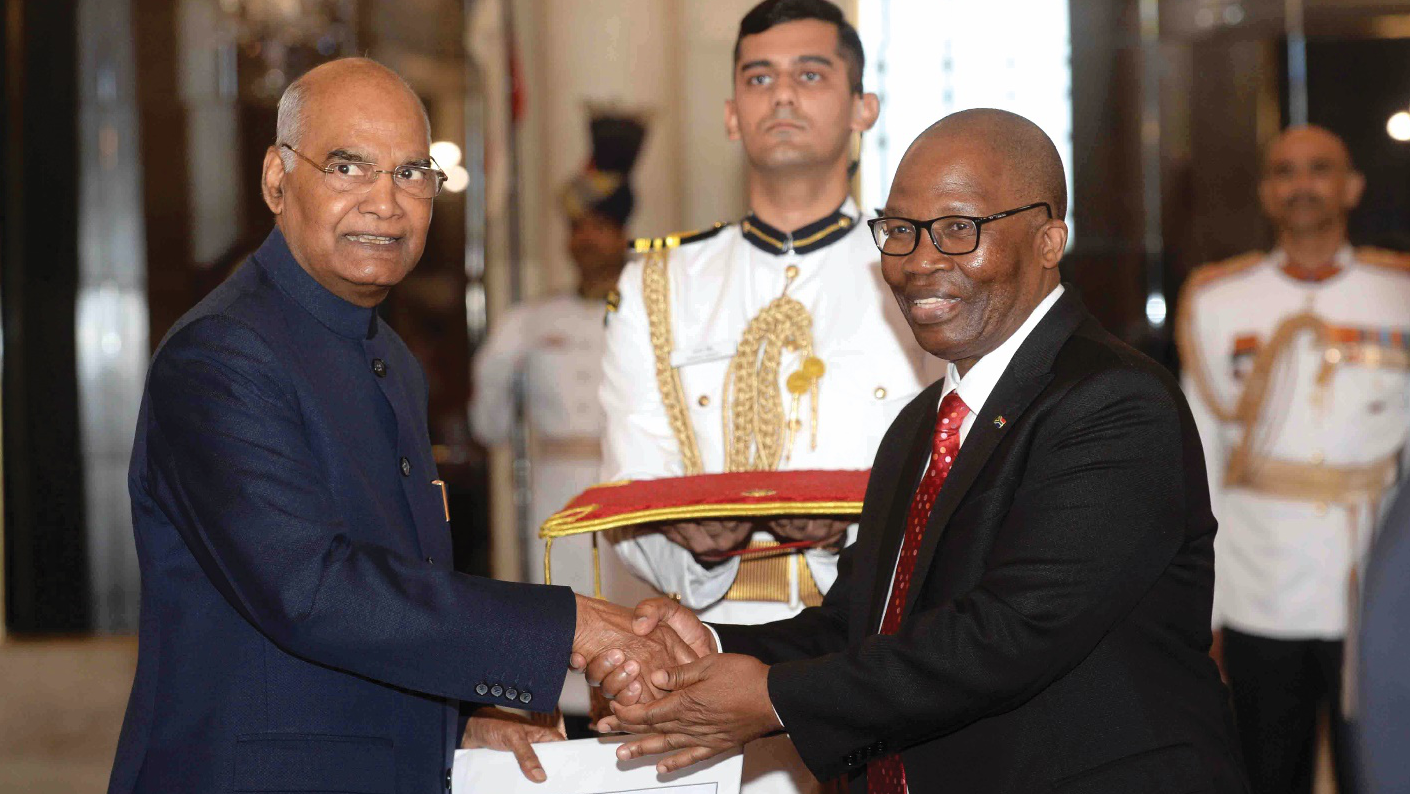 Q. South Africa and India have seen much progress in their relationship in recent years. How do you plan to build on this during your tenure?

Whenever we come to India, we come to a long-established friend of South Africa. As you know that the South African population comprises a large percentage of Indian people. To establish relations with India is to establish relations with a friend. When the issue of the struggle against apartheid came in front of the international community, it was actually brought way back in 1946 by the Indian representative in the United Nations at that time, who raised that issue sharply. From there on, India has been an active supporter of the struggle of the people of South Africa to end racial inequality.

Once apartheid was defeated, the new and harder struggle to create South Africa began – a South Africa that is equal, non-racial, non-sexist and prosperous. And who do we look up to? We look to our friends. Therefore, the establishment of relations with India is part of recreating ourselves – as the new member of the world community that is free and where everybody is free.

Q. The bilateral trade between South Africa and India has seen a marked improvement in recent years. What role does the High Commission of South Africa in India play to further improve these trade relations?

It is correct that the bilateral trade has shown a marked increase in both volume and value.  According to South African statistics, the total trade increase from R 68 billion in 2012 to R 107 billion in 2017. Actually, South Africa has recorded a surplus of between R 2-3 billion for 206-2017 financial years. It should be noted that South Africa is exporting mostly commodities such as coal to India, whilst India is exporting mostly manufactured products to South Africa. In addition to the volume and value increase, South Africa wishes to change the structure of the trade relationship by exporting more manufactured exports to India. The High Commission is promoting trade in manufactured exports to India by facilitating interaction between the South African exporters and Indian Importers. The interaction is facilitated electronically or through the staging of marketing events such as trade and investment seminars and exhibitions.

Q. Earlier this year, President of South Africa visited India and a Three-Year Strategic Programme of Cooperation (2019-2021) was signed by the two sides, aimed at reviving the Strategic Partnership established between India and South Africa through the Red Fort Declaration of March 1997. Kindly shed some light on it.

South Africa and India enjoy a strategic partnership (the Red Fort and Tshwane declarations) based on shared values and a commitment to democracy, economic transformation and just and equitable world order.

During the State Visit by President Ramaphosa to India from 25 – 26 January 2019, the Three-Year Strategic Programme for Cooperation: South Africa and India 2019 – 2021 was signed by the respective leaders. This programme aims at deepening the friendship while ensuring strategic coordination and joint efforts to enhance cooperation between the two countries and their people. Both countries committed to making the partnership more result-oriented and of greater direct benefit to the peoples of South Africa and India.

The structured bilateral mechanism between the two countries, namely the Joint Ministerial Commission (JMC) with its relevant Sub-Committees and Joint Working Groups (JWG), as well as the Foreign Office Consultations (FOC) which is held at senior officials’ level meet annually, will be utilised to achieve the three-year strategic programme’s objectives. These include increased cooperation in the fields of defence, infrastructure’ development, mining, direct trade in rough diamonds, information technology, energy, agro-processing, pharmaceuticals, tourism, financial services, start-ups, fin-tech, biotechnology, healthcare and water management & irrigation technology. These areas have been largely incorporated in the economic targets of the Mission.

The South African High Commission in New Delhi will prioritize its Economic Diplomacy programme with a view to building on the work conducted in the previous year primarily based on the areas identified in the three-year strategic programme objectives and highlighted during the State Visit by the President in January 2019.

Q. A number of bilateral agreements have been concluded between the two countries since assumption of diplomatic relations in 1993 in diverse areas ranging from economic and commercial cooperation, defence, culture, health, human settlements, public administration, science and technology and education. Do you think India-South Africa cooperation needs to be expanded beyond current levels?

Indeed, a lot has been achieved through bilateral agreements and as you mentioned, this was done in 1993. Today, as we grapple with the challenges of our recent past, and as we deepen our efforts to overcome the grave injustices of centuries, it is essential that we do so with our eyes firmly fixed on the future.

The world we now inhabit is changing at a pace and in a manner that is unprecedented in human history. Revolutionary advances in technology are reshaping the way people work and live. They are transforming the way people relate to each other, the way societies function and the way they are governed.

The devastating effects of global warming on our climate are already being felt, with extreme weather conditions damaging livelihoods, communities and economies. As a young nation, only 25 years into our democracy, we are faced with a stark choice.

It is a choice between being overtaken by technological change or harnessing it to serve our developmental aspirations. It is a choice between entrenching inequality or creating shared prosperity through innovation. Unless we adapt, unless we understand the nature of the profound change that is reshaping our world, and unless we readily embrace the opportunities it presents, the promise of our nation’s birth will forever remain unfulfilled.

Today, we choose to be a nation that is reaching into the future. In this regard, our bilateral agreements must be informed by realities of the contemporary generation and therefore we must adapt to these new realities.

Q. What measures will be taken to make it easier and more attractive for Indian companies to do business in South Africa?

Firstly, the South African government is pursuing a prudent fiscal and monetary policy to create a favourable business environment for businesses to operate in. It should be mentioned that it is in addition to the stable political environment in South Africa for businesses to thrive in. South African government is actively working towards lowering the costs of business in terms of telecommunication, transportation, power etc. Currently, South Africa is restructuring State-Owned Enterprises operating in these sectors to become more operationally effective.

South African Company registration Office has substantially cut the turnaround for the registration of new businesses. In the past, it took months to register. However, now it could be done in a couple of days. South African Government have set up Special Economic Zones to attract investment through lower corporate tax rates (15% rate instead of 28%), and the levying of zero rates for VAT and customs duties.

Q. There is potential to expand cooperation in the renewable energy sector as well as oil and gas. How would you like to see the cooperation develop?

In terms of oil and gas, Petro SA and ONG have interacted in the past to explore cooperation in the exploration of oil blocks being situated at the coast of South Africa. Furthermore, Sasol, coal to liquid South African company is actively looking to joint venture with a partner in India to utilise the South African technology to benefit India in the gas and oil sector. The Mission is encouraging the mentioned companies and other companies from both countries to explore cooperation opportunities in the oil and gas sectors of both countries.

Q. How are you promoting tourism in South Africa?

With a population of approximately 55 million and a land area of 1.27 million sq. km (nearly five times the size of the UK), South Africa’s resource base for tourism is phenomenal. The country’s tourism attractiveness lies in its diversity. Some of the features which make South Africa an incredibly attractive tourism proposition include: accessible wildlife, varied and impressive scenery, unspoiled wilderness areas, diverse cultures (in particular traditional and township African cultures), generally sunny and hot climate, no ‘jet lag’ from Europe, a well-developed infrastructure and virtually unlimited opportunities for special interest activities such as whale-watching, wild water rafting, hiking, bird-watching, bush survival, deep-sea fishing, hunting and diving.

Tourism has become a fiercely competitive business. For tourism destinations the world over, as indeed for South Africa, competitive advantage is no longer natural, but increasingly man-made – driven by science, technology, information and innovation. As such, it is not simply the stock of natural resources of South Africa that will determine her competitiveness in tourism, but rather, how these resources are managed and to what extent they are complemented with man-made innovations. In this regard, South Africa scores well on three important fronts.

First, the already well-established network of national parks (covering some 6.3% of the surface area of the country) and private nature reserves are very much ‘on trend’ with the demands of the increasingly environmentally sensitive visitor.

Second, some companies are already leaders in global ‘best practice’ in ecotourism, while others have created Disneyland-like attractions in South Africa, boosting the country’s name internationally.

Third, the recent successful political transformation in South Africa has virtually ‘opened’ the country’s tourism potential to the rest of the world and indeed to the previously neglected groups in society. It is not surprising that the World Tourism Organisation in its review of African tourism considers South Africa to be “one of the most promising tourism destinations of the African continent”. The Horwath 1995 Worldwide Hotel Industry Review concluded that South Africa’s tourism potential “is outstanding, providing peace and harmony remain”.

Notwithstanding all the above-mentioned advantages, South Africa has not been able to realise its full potential in tourism. As such, the contribution of tourism to employment, small business development, and income and foreign exchange earnings remains limited.

Q. South Africa has been actively involved in multilateral organizations, such as the India-Brazil-South Africa Dialogue Forum (IBSA), the New Asia-Africa Strategic Partnership (NAASP), the Indian Ocean Rim Association for Regional Co-operation (IORARC), and the BRICS. How is South Africa engaging with India through multilateral initiatives?

South Africa’s will continue to highlight the importance that South Africa attaches to IBSA, BRICS, IORA and other regional organisations as this provides IBSA and BRICS countries with a framework to address challenges such as UN Reform, South-South Cooperation and the work of Joint Working Groups.

The conscious decision by South Africa and India to be part of the IBSA, BRICS IORA and other regional organisation groups will allow for a collective response from the IBSA platform and will suggest that IBSA remains relevant for a variety of reasons that makes IBSA distinct from several other countries. These features include basic character of emerging, large, plural and constitutional democracies with faith in global rule of law.

This positions South Africa and India with potential scope for enhanced cooperation for democratisation of the UN among others. South Africa believes that the true reforms at the UN Security Council would come from the real efforts of IBSA. To realise this mandate, South Africa must cement its engagement and position in IBSA.

These formations must emphasize the importance of strengthening the Cooperation and coordination on IBSA, BRICS on various Working Groups on Agriculture, Energy, Health, Social Development, Human Settlement, Trade and Investment, Environment and Science and Technology, Tourism, Defence Cooperation. Thus, South Africa through its trusted friend India will cooperate side by side to further deliberate on South-South Cooperation as well as sharing experiences through Academic and Experts Forums calling for the strengthening of trade cooperation, role of IBSA, BRICS and IORA at multilateral forums, maritime cooperation, mainstreaming gender and SDGs, strengthening South-South Cooperation through IBSA and strengthening of the academic network amongst Institutions of Higher Learning in IBSA and BRICS countries.