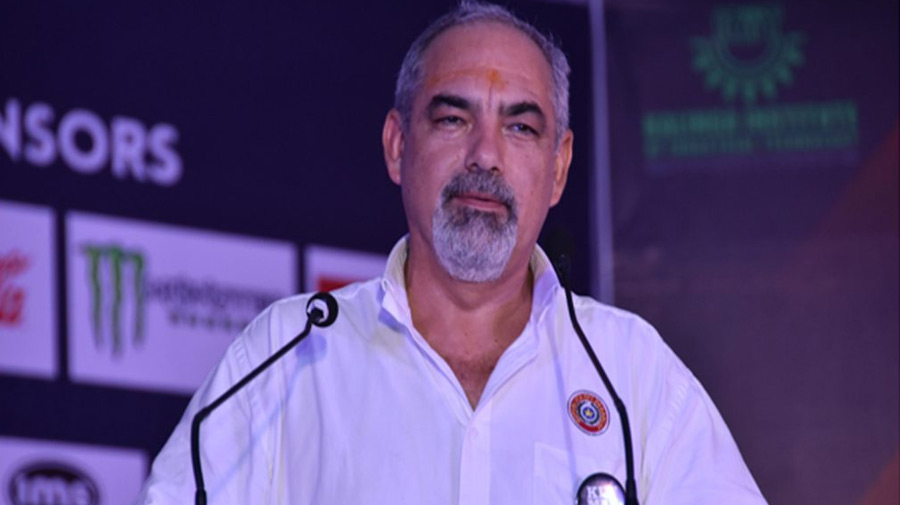 In an exclusive rendezvous with Diplomatist’s Business Editor Kanchi Batra, Ambassador of Paraguay to India, H.E. Fleming Raul Duarte Ramos shares his perspective and vision on furthering the bilateral cooperation between Paraguay and India.

Q. The recent visit of the Vice President of India, M Venkaiah Naidu to Paraguay was indeed significant. Shed some light on this visit?

This was the first high-level visit from India to Paraguay since the establishment of diplomatic relations in 1961. Vice President Naidu had a meeting with the President of Paraguay, H.E. Mario Abdo Benitez, Vice President H.E. Hugo Velazquez, as well as with the President of the National Congress (Senate), H.E. Silvio Ovelar. I am glad that, the meetings were warm and friendly and there was a commitment from both sides to strengthen and deepen relations.

The two sides agreed to explore new areas of collaboration among others in hydel and solar energy, health including traditional medicine, information and communication technology, farming and agriculture machinery, space and biotechnology, railways and tourism-related infrastructure. Specific areas discussed included agro-processing, the supply of equipment like tractors from India, modernization of the hydel energy sector, the supply of medical equipment and generic medicine that could be useful to the Paraguayan healthcare system.

Q. Are you satisfied with the existing engagement levels between the two countries? What more, according to you, needs to be done to further expand the relations?

The current situation in Paraguay generates multiple opportunities to deepen and strengthen relations with India and the countries of the Asian region in areas of commerce, trade and cooperation area. The current engagement level is satisfactory, however more opportunities for the benefit of both nations should be unlocked. The Mission’s goal is to disseminate information on the excellent and competitive economic climate that Paraguay has, connecting businesses from Infrastructure, Education, IT, Mining and Agricultural sector.

Some of the significant export items of Paraguay to India, that the Mission would like to promote include non-conventional oils like Sesame & Chia and organic products such as Stevia.

This instrument of System of Preferences like the one in force with the European Union and the United States of America, adds to the significant increase of the Paraguayan exports to the aforementioned market. The aim of this framework agreement is to expand and strengthen the existing relations between MERCOSUR and India and promote the expansion of Trade by granting reciprocal fixed tariff preference. Thanks to PTA, trade exchange between India and Paraguay will rise further, and later lead to the Free Trade Agreement between both countries.

The offer list of MERCOSUR and India contains around 500 products at present, that could be expanded to 2,000 items. The opportunities offered by the Indian market would allow Paraguay the expansion of its production scales for exportable goods, discovery of new markets, improvement of technology, introduction of innovation based on the MERCOSUR framework agreement, which allows Paraguay to improve the entry of its products into the Asian market through India and establish economic and business cooperation.

Q. How do you see agriculture cooperation between the two countries?

Paraguay has untapped opportunities in the agricultural sector. The country has highly fertile land and produces nine times the food it consumes. The hydropower, unique in the world strength of the country offers a base to something very important: freshwater reserves, the Guarani aquifer, is the second largest known aquifer system in the world. It is said that this vast underground reservoir could supply fresh drinking water to the world for 200 years. Environmentalist suggests, fresh water will become critical in under 20 years. Paraguay has a vast surplus of it, which along with convenient climate creates great opportunities for the production of agricultural products.

The other large area of cooperation is the manufacturing of agricultural equipment. Locating operations in Paraguay could support the needs of not only a demanding internal agricultural industry but also cater to other neighbouring countries. With a skilled, young population and preferential business & taxation system, Paraguay is a correct destination for agricultural companies in South America.

Paraguay is the 2nd largest exporter of stevia in the world and the production is expected to rise. There is a requirement for investment in a factory for crystallisation process, which certainly could be fulfilled by Indian enterprises.

Q. How is your country committed to provide a conducive environment for investors?

The Government of Paraguay has been prioritising innovation, connectivity, skills building and social progress, making these areas important levers for solid and lasting growth in the country. Also, large investments were also made to improve infrastructure.

Paraguay offers a stable economic & business environment and the most affordable low-tax solutions in the MERCOSUR region. The corporate income tax is 10%, the dividend income tax is 5% and VAT is just 10%. Moreover, many special investment attraction regimes were introduced like the new Investment Incentive Law 60/90, that provides tax exemptions for the import of capital goods and VAT exemptions for the purchase of nationally produced capital goods, for example.

It is important to mention that, Paraguay accounts for the largest number of young people in the region, 70% of the population is an average 35 years. Along with the stable political situation, business-friendly environment and sustained growth rate in times of economic difficulties around the world, Paraguay is undoubtedly a secure investment destination, that is worth considering.

Q. Leading companies like TCS, Aditya Birla Group, UPL, Mahindra, Hero MotoCorp, Mahindra amongst others have established operations in the region. Comment on how you eye to bring in more of Indian investment to your country?

Thanks to its privileged strategic geographical location and preferential taxation system, the country has already attracted numerous investors. The ease of doing business in Paraguay has engaged large industries and some of them have already shifted their operations to Paraguay. The position of the country in the region and the world is rising. Numbers say it all. Paraguay has reached a relevant position in the global market place, being the largest exporter of renewable energy, 4th largest exporter of soya bean, the 6th of corn and 7th of beef worldwide.

Paraguay enjoys a competitive advantage over its neighbours with its costs of production and cargo storage. The country has made itself attractive to manufacturers by reducing red tape and taxes and enabling firms to produce more cheaply and make a bigger profit. As a result, it is not uncommon for such firms to even abandon their country of origin and settle operations to Paraguay, like Hipasa SA, the Brazilian producer of diapers, which now has a plant near Asuncion, the capital city of Paraguay.

More than 100 new industries have been settled under the Maquila Regime, to name a few are Yasaki, Sumidenso, THN, Leoni, are top 10 world class industries that export to the USA, Europe and Mercosur. These investments have ratified Paraguay as a platform and an export production gateway to the world.

The Mission is active in promoting the country’s attractive business & investment opportunities through various channels, however focusing on increasing interaction between business representatives from both the countries, to elevate the opportunities.

Q. Could you briefly share with us what connects Paraguay and India?

Paraguay and India share common values such as representative democracy, the protection of human rights and the freedom of expression among others. As democracies, having a similar demographic profile with youth forming more than 65% of their respective populations, India and Paraguay have similar aspirations as well as the need for imparting requisite skills to their youth.

On a business level, the strength of both countries lies in agriculture. Both countries also receive lots of sun and are focused on benefiting from solar energy. Paraguay appreciated the International Solar Alliance (ISA) initiative launched by India in 2015 and will be joining ISA soon.

Q. On the tourism front, do you think Paraguay and India could do more? Is Paraguay looking at doing some promotional campaigns?

Paraguay offers immense tourism potential and natural beauty to create a great opportunity for the travel industry to promote it as a new tourist destination. There is an interest to position country as a destination for MICE; promotional activities in this area are on the way. However, the Mission is looking forward to a stronger interaction with tourism authorities and the private sector to leverage the potential.

Q. Are there any major events to be held in nearby future in Paraguay that will offer a great platform and will prove fruitful for the Indian investors?

Between 6-21st of July, the International Fair of Livestock, Industry, Agriculture, Trade and Services will take place in the city of Mariano Roque Alonso, which is the largest exhibition in Paraguay attracting more than 1,500 exhibitors and 600,000 visitors every year. As a part of the fair, the International Business Wheel Expo takes place, which brings together international representatives and entrepreneurs from Paraguay.

In 2018, 1,820 meetings were held between national and foreign businessmen from 549 participating companies, and business expectations of around $157 million were created. The Expo, that will take place for the 23rd time proves to be a successful platform for foreign companies, which are interested in selling products, supplies, equipment and services for the Paraguayan market.

Q. How do you see the future trajectory of Paraguay-India relationship?

Paraguay is one of the world’s leading food producers and exporters, as well as the world’s biggest renewable energy supplier. With the most competitive tax regime in the region and a strategic location at the heart of the continent with easy access to both the Pacific and Atlantic Oceans, Paraguay can grow business of Indian companies.

Seeing the enthusiasm of Paraguayan entrepreneurs and rising interest in Paraguay from Indian enterprises, our country can be used as a gateway to Latin-American and Caribbean regions. The partnership in various segments is only expected to rise.

Q. What lies ahead for India-LAC relations?

With recent high state representation visits, like of Vice President Naidu to Paraguay relations between India and Latin American Countries are strengthening. Certainly, the potential and sizeable markets attract investment. Paraguay, with a secure business climate and political situation is undoubtedly a noteworthy investment destination among Latin American Countries. It is my duty as an Ambassador to support the initiatives between India and Paraguay for solid joint ventures in the future and along with my colleagues at the Mission, I will spare no effort to ensure its success.