Diplomatist > Topics > Climate & Environment > Captain Chainsaw is burning the Amazon, and the rest of the world is cheering him on

Captain Chainsaw is burning the Amazon, and the rest of the world is cheering him on 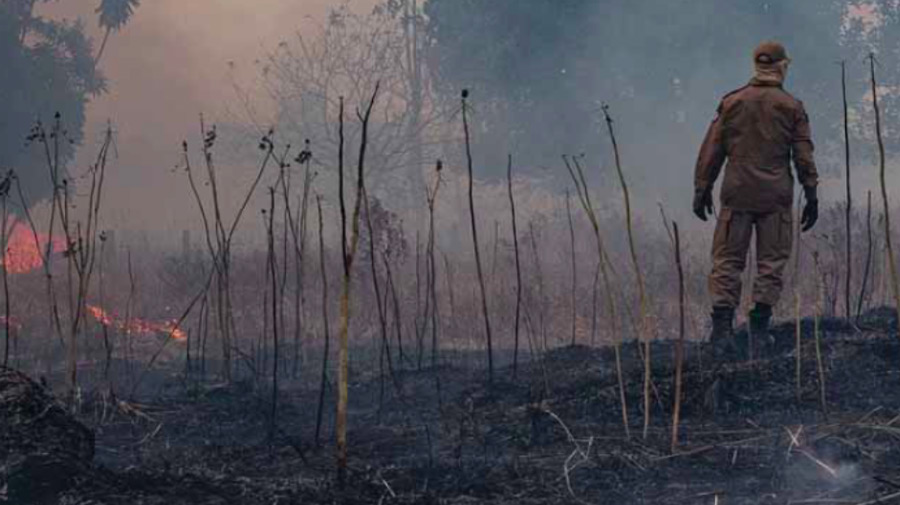 “Captain Chainsaw”, this is the strangely affectionate nick-name given to Brazilian President Jair Bolsonaro. While in some parts of the world such a name might be given as an insult, in Brazil it is a celebration of Bolsonaro’s economic policies and exploitation of natural resources as a way of boosting the faltering economy.

These policies were brought to the attention of the world in August as fires blazed across the Amazon region, blacking out the sky in Sao Paolo, over 1,500 miles away, stirring international outcry. It quickly became clear that many of the fires were started deliberately, but while there is a presently a ban on starting new fires, many continue to rage, with over 121,000 being reported in 2019 up to mid-September, an increase of over 50 percent on previous years. The fires themselves have already fallen out of the headlines, but the political and economic policies of Brazil and the rest of the world remain, and without an examination of these, we will see further destruction of the Amazon and other resources vital to human existence.

Many have placed the blame for the fires squarely at the feet of Brazil’s new President, Jair Bolsonaro, and his extremist environmental minister, Ricardo Salles. This blame is well-founded, policies enacted by the pair have not only permitted the fires but have actively encouraged them – a recent report by MAAP (Monitoring of the Andean Amazon) scientifically linked the fires to government policies of deforestation. The pairs toxic combination of radial ideology, corruption and greed was apparent long before either took office. Bolsonaro had long been a political outsider. Despite 30 years as a congressman, his wild, and abhorrent views, had kept him firmly on the periphery, seen by many as an embarrassment. Similarly, Salles failed to make political headway, losing a run for federal congress in 2018. He has also been found guilty of altering official documents to support mining companies. This behaviour was rewarded by Bolsonaro with the position of Environment Minister.

Since gaining power the two of them have played strongman politics, enacting their policies against the Amazon at an alarming speed. The fires in the Amazon are not a side product of these policies but are an active part of them. Fires are being encouraged in order to make space for agribusiness, logging and other extractive industries. All part of a push to boost the economy of Brazil. Following the international outcry about these policies, Bolsonaro attempted to distance himself from the situation. First firing the Director of the National Institute for Space Research, the organisation who first showed the extent to which the fires had gripped the region. He then went on to blame NGOs, suggesting that the fires were started as a way of discrediting his government. No evidence was offered for this claim, which has been widely dismissed. In contrast, Paulo Artaxo, an atmospheric physicist at the University of São Paulo has stated that “there is no doubt that this rise in fire activity is associated with a sharp rise in deforestation”.

Bolsorano’s polices have been called a ‘threat to the climate equilibrium’ by Greenpeace, and more forest has been cleared under the first nine months of his presidency that in the previous three years. Traditional custodians of the Amazon have been swept aside. The ministry of agriculture is now in charge of the demarcation of indigenous territories, rather than the Justice Ministry. This is a clear conflict of interest, as it is the ministry of agriculture who seeks to gain from the clearing of the forest. Other agencies that support indigenous ownership of land, and protection of the Amazon, have also found their budgets slashed, leaving them barely able to function. Bolsorano has had a long-standing anti-indigenous and racist mindset, suggesting that Brazil should now allow ‘one centimetre [to be] demarcated for indigenous reserves or quilombolas’.

Bolsorano though is though only paying back those that helped to get him into power. His campaign was heavily funded by Brazil’s hugely powerful agribusiness, who saw in the new president a man who would bend to their will. And it would seem they were right, Bolsorano has already lifted bans on a huge array of pesticides, with little debate or scientific evidence of their safety. Some reports suggest 500 million bees have died this year along as a result. For all the bravado, Bolsorano is just a puppet of the powerful global agricultural lobby.

Cheering from the sidelines

While we must place a huge amount of blame at the feet of the Brazilian government, and especially Bolsorano, this is an overly simplified version of the world. The agribusiness lobby that got him to power and his policies of environmental destruction and indigenous genocide are fueled by free trade agreements, political back-slapping, climate change denial and a global shift to the political right.

China, the US and the EU all have numerous trade agreements in place, or on the table, all of which are part of the process of burning the Amazon. In September this year, the US and Brazil agreed to promote private-sector development in the Amazon. Brazil has claimed that the $100m investment in opening up the Amazon to economic development is the only way to safeguard the region. Critics though have claimed that this is really a cover story for opening the region to more mining, logging and farming. Even small roads through the region will bring more settlers who clear forest.

In the EU, Finland called for European countries to consider stopping imports of soybeans and beef from Brazil until environmental protections were in place. Yet, the EU remains brazils second largest trading partner, and this call was presented against a backdrop of the European Commission signing an agreement with the Mercosur states that would see the removal of numerous trade barriers, increasing imports of beef, chicken, sugar and ethanol from the region, all of which will create increased production in Brazil, putting additional pressures on the Amazon, and fuelingBolsorano’s slash and burn economics. 41 percent of EU beef already comes from Brazil. The fires in the Amazon and the supporting of Brazils political position on the issue makes a mockery of the EC claim that the Mercosur agreement will promote ‘sustainable development’. And while French President Emmanual Macron was publicly applauded for calling the Amazon fires an ‘international crisis’, at no point did he or other EU nations suggest reexamining the Mercoser-EU agreement.

A new report entitled ‘Complicity in Destruction’ produced by Amazon Watch and Apid (Articulation of Indigenous Peoples of Brazil) has also found significant links between EU, US and Canadian companies and illegal deforestation. 56 Brazilian companies who have been fined for illegal activities in the Amazon have been liked to EU and North American companies. The report also found financial connections between dozens of top-tier international financial institutions and companies complicit in the destruction of the Amazon.

The Amazon has always been exploited, and much of this by rich corporations in the northern hemisphere. Many see Bolsorano’s policies as a right to sovereignty, and certainly the Strongman political image the president has painted of himself plays into this. This is beyond an issue of nationalism though, losing the Amazon though would be catastrophic for all human life. The forest is home to three million native plants and animals and is a huge carbon sink. If we continue at this rate WWF suggests 55 percent of the forest will be destroyed or severely damaged by 2030, this will dramatically reduce its ability to pull planet-warming greenhouse gases out of the atmosphere, drastically speeding up climate change. The world is already changing faster than predicted by the UNs Intergovernmental Panel of Climate Change in 2014. We must call to account nationalistic, climate change denying governments, like Bolsorano’s or Trumps, and moreover, we must deconstruct the free trade agreements that quietly prop up these regimes as our politicians publicly denounce them. The fires in the Amazon are no accident, they were started by Bolsorano, but they are fanned by the winds of capitalism and free trade.