The G-7 Summit: Sovereigntism vs. Internationalism 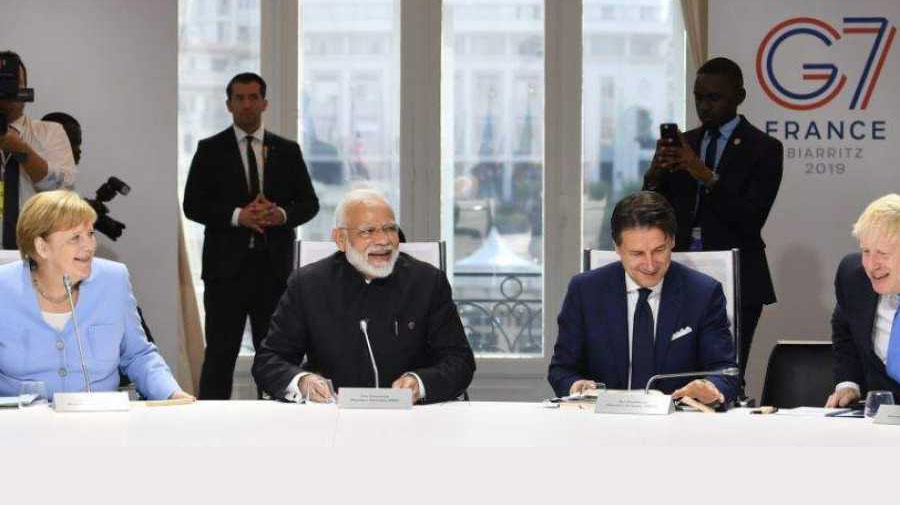 The Biarritz G-7 summit began with an apocalyptic warning from its host, French President Emmanuel Macron, who exclaimed “Our house is burning. Literally.” Macron then set an emergency agenda for the G-7 summit after castigating Brazilian President Jair Bolsonaro for not safeguarding the Amazon rainforest – “the lungs which produces 20% of our planet’s oxygen” in Macron’s words.

Despite the fact that Macron scored very high for bringing global attention to a major environmental catastrophe that impacts Brazil, the Amazon region, and life on this planet, the dispute between France and Brazil illustrated the tensions between neo-liberal internationalism and the flames of nationalism and sovereigntism that now plague the G-7, the European Union (EU), and other international organizations.

Macron had threatened not to sign the world’s largest free trade accord, the Mercusor agreement between the EU and Brazil, plus Argentina, Paraguay and Uruguay — in an effort to pressure Brazilian President Jair Bolsonaro to stop the fires and protect the Amazon rain forest from excessive destruction. In response, Bolsonaro claimed Macron was interfering in Brazil’s sovereign affairs — even though the Mercusor agreement explicitly demands its signatories to commit to environmental protection.

The dilemma raised here is that “Our house” is not only burning in the Amazon, but it is also burning within and between countries — as the flames of sovereigntism have spread around the world. It is a series of wildfires that the G-7 might be able to snuff out in some regions — but only if the seven countries can better coordinate their fire-fighting techniques, and work with future partners, including Russia and India.

To offset the G-7’s negative image as a costly, closed-door, oligarchical, neo-colonial “club” of Westerners plus Japan, President Macron has introduced a number of innovations. Intended to make the G-7 more effective and inclusive, these innovations seek to expand the number of participants by including liberal democracies with a major regional influence, African partner states, and key representatives of civil society. By also meeting with leaders of non-G-7 states, Macron has hoped that the G-7 can address the concerns of those states — and possibly help mediate a number of significant disputes.

By inviting Iranian Foreign Minister Javad Zarif to the summit unannounced, Macron hoped to impress President Trump with the need to prevent Tehran from exiting the 2015 nuclear accord that limits Iran’s capacity to enrich uranium. Macron also wanted to show how the threat of US sanctions on states, such as India, China, Turkey, among others, that purchase Iranian oil and gas, has raised disaccord. In effect, Macron has wanted to mediate between the US and Iran before it is too late to prevent a major conflict involving acts of terrorism and regional military interventions that could lead energy prices to skyrocket. As a positive result, with G-7 and EU backing, Washington and Tehran could soon meet in direct discussions — if the right political conditions are met.

Macron’s behind the scenes meeting with Russian President Vladimir Putin was intended to forge a new strategy toward Moscow in the realization that “The European continent… will never be in security, if we don’t pacify and clarify our relations with Russia” in Macron’s words. The dilemma is that US and European sanctions that were placed on Russia in response to Putin’s decision to annex Crimea in 2014 have not changed Russian behavior — and have generated a new arms rivalry.

As tensions with Moscow have mounted, President Donald Trump has hoped to bring Russia back into the G-7, perhaps in 2020 when the US hosts the next G-7 summit. This proposal has thus far been opposed by France, the UK and Germany, who believe it would be a strategic error to reward Russia with G-7 membership without first obtaining some form of “progress” in ameliorating the conflict between Moscow and Kiev over eastern Ukraine and the Crimea. Paris and Berlin are accordingly expected to organize a Normandy format summit to help negotiate the Ukraine question in the near future. In addition to preventing a new arms rivalry that could indirectly impact India, the promise of closer ties between the US, Europeans and Russia could work to draw Moscow away from its burgeoning economic and military ties to Beijing.

In addition to meeting with Zarif and Putin, Macron met with Indian Prime Minister Narendra Modi in a very upbeat encounter. In strong support of Macron’s pro-environmental policies, Modi addressed the need to develop solar energy, protect biodiversity, and eliminate excess plastic. Macron and Modi affirmed in their joint statement that they will support new initiatives aimed at lowering greenhouse gas emissions — and thereby help move India away from the heavy use of coal.

Macron and Modi likewise discussed the possibility of greater bilateral cooperation involving maritime surveillance, nuclear energy, satellites and defense (including India’s purchase of the French Rafale fighter jet). In addition to dealing with questions involving cybersecurity and Artificial Intelligence, the two discussed their mutual concern with major acts of terrorism that have impacted both countries.

The question of India’s revocation of Jammu and Kashmir autonomy in August 2019 did obtain G-7 attention. Macron publicly appeared to accept Modi’s position that Kashmir was a sovereign matter and that New Delhi and Islamabad could deal with the Kashmir issue bilaterally. For his part, after his meeting with Modi, President Trump appeared to back off on his offer to help “mediate” or “assist” India and Pakistan over Kashmir. Nevertheless, the question as to whether India can settle the Jammu/Kashmir dispute with Pakistan and the Ladakh dispute with China bilaterally ― without some form of international mediation particularly if conflict in the region should erupt ― remains to be seen.

Although Chinese President Xi Jinping was not invited to the summit, China was the elephant in the room. Given President Trump’s trade concerns with China, the G-7 did discuss policies that would simplify regulatory barriers and modernise international taxation in accord with OECD frameworks. The G-7 also proposed reforming the World Trade Organization (of which China and India are members) to improve intellectual property protection, dispute settlement, and to eliminate unfair trade practices. Although helpful, it is dubious that these talks will be able to reduce tensions between China and the US over trade and monetary policy, intellectual property theft, cyber-sabotage, and Chinese irredentist claims in the Indo-Pacific region.

The G-7 did make a general statement that called for violence to be avoided during the Hong Kong pro-democracy protests and that reaffirmed the importance of the 1984 Sino-British Joint Declaration that promised that Hong Kong’s way of life would remain unchanged until 2047. Yet the G-7 were then accused of “meddling” with “China’s internal affairs” by a Chinese foreign ministry spokesperson. The latter “sovereigntist” position ignores the fact that Hong Kong represents the key intermediary hub between China and international trade and finance — so what happens in Hong Kong impacts much of the global economy.

Although heavily criticized inside France due to its costs and its apparent ineffectiveness to tackle major issues, the summit did prod the G-7 in a new direction. And on the international level, President Macron demonstrated France’s role as a “mediating” and “balancing” power between competing sovereigntist and internationalist demands. Yet much more needs to be done.

In addition to dealing with the global economic and environmental crises, and in the effort to better mediate sovereigntist and internationalist concerns, the G-7 will need to help put an end to conflict between Kiev and Moscow over the eastern Ukraine and Crimea, while concurrently forging a concerted strategy toward a rising China as it challenges American, European, Japanese, Indian and Russian interests as well. To take decisive steps toward such a strategy, the G-7 should consider the membership of both Russia and India in the formation of a new Group of 9 (G-9) ― that China could possibly join in the future — assuming appropriate political conditions can be met by all three countries.