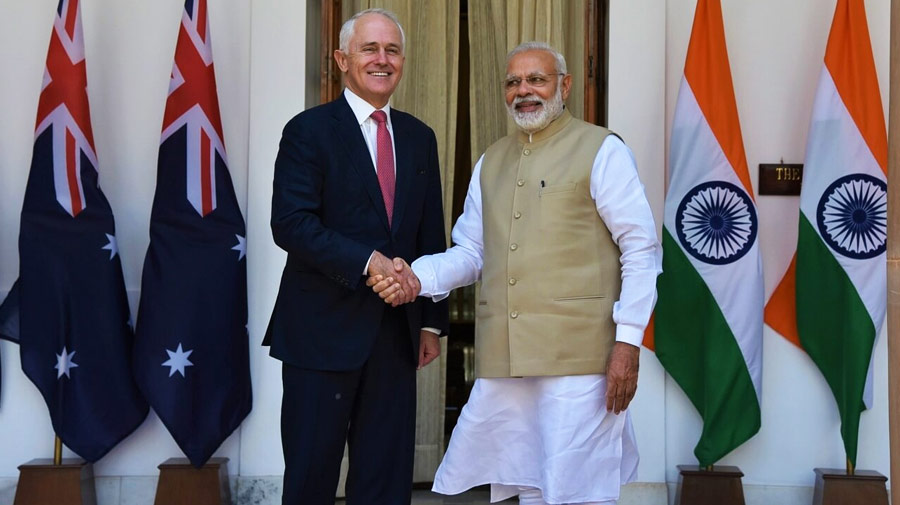 Growing from Strength to Strength

The India Australia relationship is emerging as a significant bilateral engagement, encouraged by the convergence of interests between the two nations in areas such as education, regional security, energy and resources, and international trade.

Australia and India share much in common, both historically and from a modern geopolitical perspective. The changing landscape within the Indo-Pacific region has been the catalyst for stronger ties in recent times. In addition, shared democratic values, a common love for the sport, as well as economic and strategic interests make Australia and India a natural fit for collaboration and cooperation.

In 2014, Australian Prime Minister, Tony Abbott, visited India. This was the first bilateral visit by a prime minister since leader Narendra Modi was elected. This was followed by Prime Minister Modi’s visit to Australia in conjunction with the G20 Summit in November 2014. Prime Minister Modi’s visit was the first official visit by an Indian Prime Minister in 28 years (since Rajiv Gandhi in 1986). To put this into perspective, since 50 percent of India’s population is under the age of 25, more than half of the Indian population had not witnessed a Prime Ministerial state visit to Australia during their lifetime. These state visits, which occurred in quick succession, signaled to the world that the Australian and Indian governments, were more than ever before, seeing the value in investing in this important relationship. Momentum in the bilateral partnership was beginning to build.

Indeed, Prime Minister Modi highlighted the importance of the Australia-India partnership during his speech in Australia’s Parliament in 2014, stating that:

“Australia will not be at the periphery of our vision but at the center of our thoughts… There are few countries in the world where we see so much synergy as we do in Australia. India [is] a nation of more than a billion seeking development; Australia [is] a developed country of a few million people and vast resources.”

Since 2014, there have been numerous visits by Australian Prime Ministers and Cabinet Ministers to India with a focus on maintaining momentum at a Government-to-Government level. A number of Indian Cabinet Ministers have also visited Australia in recent years to continue the diplomatic dialogue between New Delhi and Canberra. In addition, in November 2018, the President of India, His Excellency Ram Nath Kovind, visited Australia, marking the first ever official state visit by an Indian President to Australia.

Until recently, many thought that the strong economic prospects would fuel the growth of Australia-India bilateral ties. However, recently Canberra and New Delhi seem to be drawn closer together for more strategic reasons.

With the changing geopolitical landscape in the Indo-Pacific, namely, the rise of China’s presence in the region, Australia and India have scaled up defence cooperation. In 2014, the Australian and Indian Prime Ministers announced a Framework for Security Co-operation and as a consequence, there have subsequently been a number of joint military and maritime exercises.

In June 2017,the Indian Navy and Royal Australian Navy held their first-ever bilateral naval drill off the coast of Western Australia. The first joint naval exercise, called AUSINDEX, was held in September 2015 in the Bay of Bengal. In 2018, the Royal Australia Air Force (RAAF) and Indian Air Force (IAF) held joint training exercises and flew together over Australian soil (Exercise Pitch Black 2018).

The potential for stronger trade and investment linkages between India and Australia is enormous. Currently, India is Australia’s fifth largest export market with goods and services exports valued at approximately A$21.87 billion as of 2017-18. To put this in perspective, Australia’s two-way trade relationship with China is valued at A$174.45 billion. Noting the significant difference between these two trade partners, coupled with the fact that India is currently the world’s fastest-growing major economy, Australia, and to a growing extent Australian companies, have recongised the importance of deepening economic ties with India.

Australia and India commenced negotiations for a Comprehensive Economic Cooperation Agreement (CECA) in 2011. While there have been nine rounds of negotiations, no formal negotiations have occurred since September 2015. However, while negotiations for CECA have stalled, there is still plenty of scope for Governments and Institutions to build strong economic linkages.

A key outcome of Australian Prime Minister Turnbull’s visit to India in 2017 was that the Australian Government would commission a landmark India Economic strategy. The Report, released in July 2018, was entitled “An India Economic Strategy to 2035: Navigating from Potential to Delivery” and was prepared by Mr Peter Varghese AO, former Secretary of the Department of Foreign Affairs and Trade and former Australian High Commissioner to India. The Report and its recommendations have been endorsed by both sides of politics and promise to create a roadmap for unlocking the many economic opportunities available in the India-Australia relationship. In commissioning the Report, the Australian Government wanted to make clear its desires about “cementing India as a priority economic partner”. Indeed, the then Minister for Trade, Tourism and Investment, The Hon Steven Ciobo MP, noted that “[t]he report judges that no single market over the next 20 years will offer more growth opportunities for Australia than India.” The Report identifies ten sectors where the Australian Government and companies should focus their efforts. These focus areas are where Australia’s competitive advantages match India’s demands.

Shortly after the release of the Varghese Report, the Indian Government also emphasised the importance of the economic partnership with Australian and acknowledged that it had commissioned a comprehensive economic strategy on Australia, and appointed Ambassador Anil Wadhwa as Chairman of the CII task force. The strategy document is set to complement the Varghese Report.

While the Australian diaspora in India is miniscule, there is an increasing number of young Australians traveling to India for short-term mobility programmes. This has largely been fueled by the Australian Government’s New Colombo Plan which aims to encourage people-to-people linkages between young Australians and other young people in the region. Hundreds of Australian university students travel to India every year on short-term programs to learn about and experience India.

Educational linkages and collaborations have increased dramatically over the past few years with most Australian university seeking to form strategic partnerships with quality Indian institutions. As a result, academics are beginning to see value in research collaboration – the recent tie-up between the University of Queensland and IIT Delhi, and the link between Monash and IIT Bombay are great examples of this. The fact that Deakin University has had a presence in India for almost 25 years is also indicative of the fact that Australian education institutions see the value in investing in India’s future.

Education is a key facet of the Australia-India relationship. One of the significant challenges that India faces is in higher education. The Indian Government has promoted policies to skill the younger population, both in terms of vocational education and higher education. This presents Australian institutions with a unique opportunity to collaborate with India. While the USA and UK have historically been the preferred choice of many aspiring Indians for higher education, the changing political landscapes and visa policies in these countries have made Australia an even more attractive option – especially since Australia boasts some of the leading universities in the world. As Indian students graduate from Australian universities, people-to-people and institutional linkages will only become stronger.

Tourism between Australia and India is also on the rise, with more than 300,000 Indians visiting Australia in 2017, an increase of more than 15 percent from the previous year.

Other cultural aspects have the potential to foster stronger ties. For instance, Australia and India share a love for the sport. Numerous Australians cricketers have a high profile in India and continue to engage with India even after their retirement. While cricket is the obvious synergy in this regard, there is a growing interest in other sports across borders. India has an Australian Football League (AFL) club which plays in the Australian Football International Cup, for example. An Australian team competed in the Kabaddi World Cup in India in 2016. Food, cinema, and the arts should not be overlooked when it comes to soft power diplomacy. For instance, MasterChef Australia is very popular in India, and the show probably boasts more viewers in India than in Australia, in absolute terms. The Indian Film Festival in Melbourne and the Jaipur Literature Festival’s collaborations with various Australian literature festivals, as well as many other growing collaborations in the arts have been encouraged by Government and also continue to grow organically.

As the Varghese Report aptly states, “[t]he Australia India relationship has had false starts in the past but that must not distract us from the opportunities of the future.” It appears that strategic interests, in particular, have converged, encouraging stronger cooperation between India and Australia. In addition, the huge economic potential and complementarities in the bilateral relationship mean that Australia and India are natural economic partners. If Government and Business can capitalize on the strong and growing people-to-people links, deeper ties are inevitable.