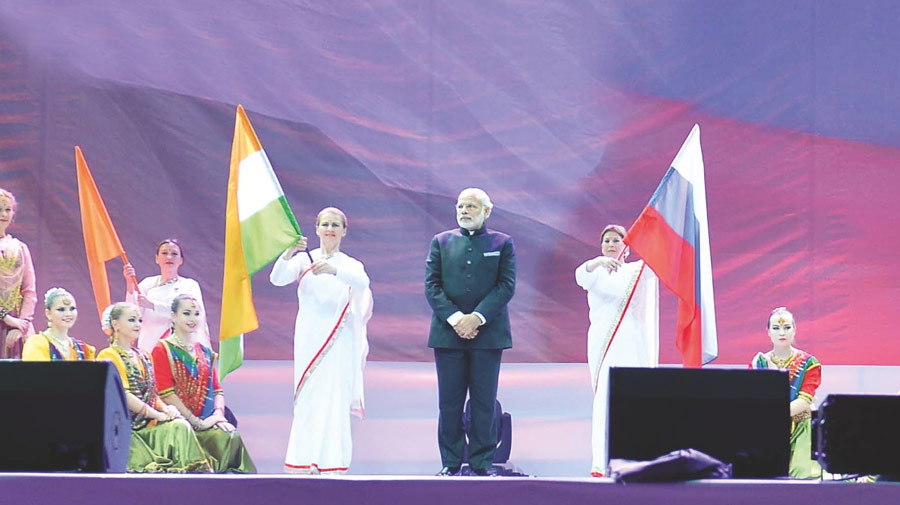 Indian government under Prime Minister Narendra Modi is currently engaged in giving a new direction to its foreign policy by strengthening India’s soft power credentials abroad. Modi doctrine promotes soft power diplomacy through Yoga, Buddhism, Indian Diaspora, education, language, literature, cinema, media, history, the commemoration of legendary figures, and the like to bring about a positive image of India in front of the international audience. Russia, with which India has a history of close relations dating from the Tsarist era to the Soviet Union to the present, is unique to India. Historically, culture played a powerful role in strengthening mutual relations. The joint statement “Reaching New Heights of Cooperation through Trust and Partnership” signed by President Putin and PM Modi on the outcomes of the 5th Eastern Economic Forum (EEF) meeting and 20th annual summit held in Vladivostok on 4-6 September 2019 reflects the significance of culture/soft power.

Joseph Nye in 1990 coined the term soft power, a power of attraction, that rests on a country’s “three resources: its culture in places (where it is attractive to others); its political value (when it lives up to them at home and abroad); and its foreign policies (when they are seen as legitimate and having moral authority” (Nye 1990, 2005: 11) The aim of demonstrating soft power is to project a positive image of the country in front of international audience to gain traction in various spheres of cooperation. Government’s foreign assistance and public diplomacy programmes are important soft power instruments. Shashi Tharoor (2011: 341), pointed out India’s soft power potential in enhancing credibility at the world stage is constitutive of its culture, political values and a moral foreign policy. Tharoor (2011: 342-343) has claimed that the Indian civilizational ethos, quality of culture and the unique credential of being the world’s largest democracy has the potential to make the country truly influential in the 21st century.

India’s evocation of soft power is done to gain a significant role, as a rising global power, in the 21st-century world. Through soft power, India aims to improve its image abroad, overcome/compensate for lack of hard power, mitigate international anxieties about India’s rise as a global power, attract foreign investment, engage with the Indian diaspora, invite foreign tourists to visit and define India’s position on various global and regional issues.

The soft power is evoked partly by the Indian government and partly by the civil society, individuals, organizations, artists, intellectuals, educational institutions, etc. The Indian embassy in Moscow, Indian Council of Cultural Relations (ICCR), Ministry of External Affairs and Joint Working Group on Culture has taken initiatives to spread soft power instruments to Russia. Public diplomacy programmes are being organized in association with various NGOs. Jawaharlal Nehru Centre in Moscow has been conducting classes for the Hindi language, Indian dance forms, etc. ICCR even provides scholarship to Russian students for pursuing studies in India. Embassy of India School in Moscow which is affiliated to Kendriya Vidyalaya Sangathan in New Delhi and has teachers deputed from India has been an important promoter of Indian culture in Russia.

Interaction with Indian diaspora is a government priority. Indian diaspora in Russia and its organizations are one of the main sources of showcasing Indian culture. Hindustani Samaj (the oldest Indian organization in Russia functioning since 1957), Indian Business Alliance, Textile Business Alliance, Russia Tamil Sangam, Moscow Durga Puja Association, Overseas Bihar Association, AMMA (All Moscow Malayalee Association), DISHA (Indian-Russian Friendship Society), Bhartiya SanskritikSamaj, and Ramakrishna Society Vedanta Centre, Moscow are some of the non-governmental spaces for propagating India’s soft power assets. In the recently concluded 20th bilateral summit and 5th EEF Meeting PM Modi was welcomed by the Indian diaspora in Vladivostok. Modi has emphasized that the professionalism of Indian diaspora help bring rapid development in Russian Far East. Russian scholars, Andrey A. Gruzdeva, Anastasiya V. Konukhovab and Sergey A. Podyapolskiy (2015: 1725-1727), noted three images of India’s soft power: 1. a feminine image “associated with oriental exotics – philosophical and religious teachings and practices, music, cinema, dance, cuisine, etc”; 2. masculine image related to Mahatma Gandhi and his nonviolent movement with elements of inner strength, determination and independence, non-violent resistance and multiethnic democracy; and 3. Emerging image connected to “the development of electronic technologies (Bangalore, etc.), fashion, mass media and cinema (Bollywood)”. In the 20th annual summit, India and Russia decided “to continue the successful practice of carrying out festivals of Russian culture in India and Indian culture in Russia, as well as Russian film festivals in India and Indian film festivals in Russia. Both Sides welcomed that Russia will be the Partner Country in the 50th International Film Festival to be held in Goa on November 20-28, 2019.” Both sides exchanged agreement on Cooperation in Audiovisual Co-production (MEA 2019).

Yoga has attracted the attention of a large number of people ever since the Modi government began popularizing it across the world by celebrating 21st June as International Yoga day. Indian Embassy annually celebrates International Day of Yoga (IDY) in Russia by involving several regions and a large number of Yoga enthusiasts. Ayurvedic and Yoga clinics are also being run by Indians in Moscow and St. Petersburg.

Indian embassy’s celebration of India Festival in Russia annually is a public occasion to showcase India’s cultural assets, classical dance forms and music such as Bharatanatyam, Kathak, Hindustani, Carnatic music, etc. India has tie-ups with prominent Russian universities such as Russian State University for Humanities (Moscow); Institute of Oriental Studies (Moscow); Institute of Asian and African Studies at the Moscow State University; School of International Relations at the St. Petersburg University; Far Eastern Federal University (Vladivostok), etc. The Institute of Philosophy (Moscow) has Mahatma Gandhi Chair on Indian Philosophy. PM Modi in his speech at the plenary session of 5th EEF recollected the mutual influence and shared vision left by Tolstoy and Gandhi as an inspiration to work together for a stable and secure future of the world. “This will be the beginning of a new chapter” in India-Russia partnership in 2019 on the occasion of celebrating 150th birth anniversary of Mahatma Gandhi (MEA 2019).

Russia has a strong tradition of Indology studies. Indian languages like Hindi, Sanskrit, Tamil, Malayalam, Marathi, Gujarati, Bengali, Urdu, Sanskrit and Pali are being taught in Russian universities. Festival of Hindi language is an important event. In the 5th EEF meeting, both sides agreed to “continue the comprehensive popularization of the Russian language in India and the Hindi language in Russia, in particular through the development of contacts between relevant educational organizations of the two countries” (MEA 2019). Both sides agreed to develop cooperation in education and implementation of bilateral cultural exchanges by expanding geographies and involving youth and folk art groups. The partnership between Indian media WION and Russian media Sputnik was announced in EEF meeting. This media partnership aims to create an interactive platform for “communicating cultures and consolidating partnerships.” Sudhir Chaudhary, WION’s Editor-in-Chief says the new era of bilateral partnership “will demonstrate the importance of soft power in a complex geopolitical landscape.”

Russians have maintained strong affinities towards Indian cuisines and spices. In fact, tea is called “Chai” in both Russian and Hindi. “Masala Chai” has become very popular in Russia. Many Indians are running successful restaurants in Russian cities such as Vladivostok. Russians have fascinations towards Indian traditions, family values and consumer products. Tourism, commemorations of historical milestones, Literature festivals, architectural marvels, ancient monuments, IT outsourcing and sports events are soft power resources that India may evoke in Russia. India and Russia are two nations which greatly influenced and learned from each other. Mutual civilizational encounters, mutuality of literature and revolutionary ideals attracted both nations towards each other. India’s civilizational credentials, values of tolerance, acceptance, refuge, pluralism, co-existence of different religions, languages, cultures and inclusiveness and cross-fertilisation of cultures are respected in Russia. Indian writer, Rahul Sankrityayan contributed a travelogue titled “From Volga to Ganga”, which could be perfect imagery for the Indo-Russian civilizational encounter. Kalidasa, Prem Chand and Krishan Chander were as popular in Russia as were Tolstoy, Gorky, Pushkin and Dostoevsky in India. The famous Russian historian Nikolai Karamzin said this about Kalidasa’s works, “for me Kalidasa is no less important than Homer.” Alexander Pushkin had a great interest in Ramayana. Russian Translations of Gita and Sakuntala appeared in 1788 and 1792 respectively (Usha 2018).

Russian perception of India with respect and honour has a soft power impact. Unlike Europeans, Russians who visited in medieval times imagined India as a ‘fairyland’ with fantastic animals, fabulous riches and wise sages. The first Russian writing on India appeared in the 12th-13th century known as “The Relation about India” or “The Story of India the Rich”. Russian merchant from the city of Tver, Afanasy Nikitin visited India in the 15th century (1446-1472) before Vasco Da Gama. His account of Indian life, A Journey Beyond Three Seas (Khozhdenieza tri moria) is considered as the first eyewitness account of India by a Russian. Gerasim Lebedev, a Russian traveller reached India in 1785 was considered the first Russian Indologist who had expertise in music, drama, Sanskrit and Bengali language that he learned from a Bengali Pandit, Goloknath Das. Journalist N. I. Novikov, who worked for the journal, Supplement to the Moscow News, has noted the plight of India under British rule. The revolutionary democrats and writers like Belinsky, Cheknyshevsky and Dobrolnbov had extremely high regards for Indian cultural values and spiritual ethos (Usha 2018). India’s foreign minister Jaishankar in his visit to Russia in September 2019 proclaims India-Russia relations is “a stable factor in international life.” India-Russia relation is often qualified as an all-weather and time tested partnership based on the convergence of interests, civilizational commonalities, mutual trust and unity of perception on global issues and geopolitical priorities as PM Modi rightly pointed out in the EEF and 20th Summit meetings. The emotional character of both nations is similar, that is, the pursuit of truth and justice.

India-Russia relationship has global significance because of their role in the international political system to achieve global strategic stability, modernization, prosperity and democratic multipolar world order. Finally, the use of soft power assets is aimed at supporting India’s political and economic engagements with Eastern Economic Forum, Eurasian Economic Union, regional connectivity initiatives and cooperation with Russia’s Far East. In this regard, PM Modi’s contribution in 5th EFF and 20th annual bilateral summit has opened a “new chapter” in Russia-India relations by enhancing cooperation in Russia’s Far East and making inroads into Asia-Pacific, which is the most dynamic region in the international system. India’s announcement of Act Far East policy and investment of $1 billion dollars in Russian Far East offers new opportunity to boost cooperation in various areas in the Indo-Pacific region.