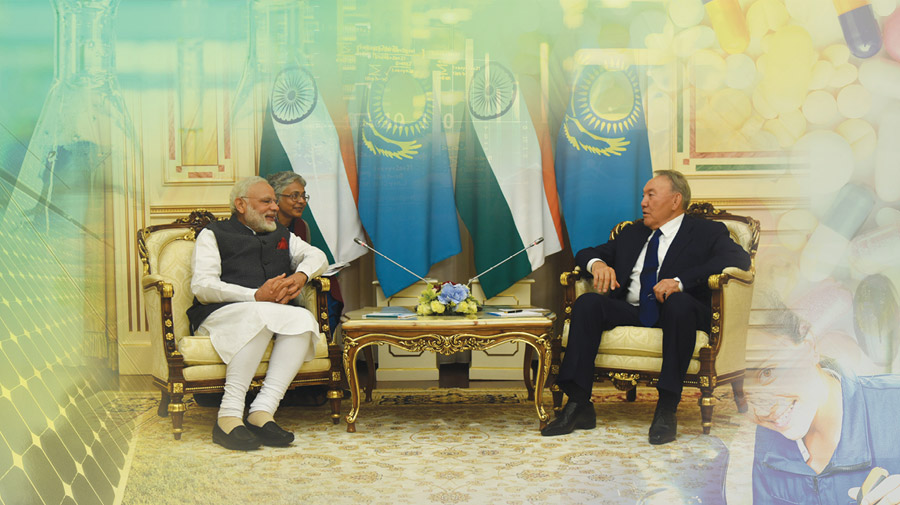 After the collapse of the Soviet Union, India was one of the countries in the world to recognise Kazakhstan’s independence. Subsequently, India established its diplomatic relations with Kazakhstan in February 1992[i] and elevated to a strategic level in 2009 during President Nursultan Nazarbayev’s visit to India[ii]. In the highly globalised world, both countries are important to each other. India, with $2.99 trillion of GDP, is the most populous democracy and the sixth-largest economy in the world. The other side, Kazakhstan is the ninth largest country in the world, with an area of 2,699,700 square Kilometers, with 18 million population in 2018, and is situated in the heart of Central Asia, bordering Russia to its north; China on its east; Uzbekistan, Kyrgyzstan and Turkmenistan along its south; and the Caspian Sea to its West[iii]. Kazakhstan is an energy-rich country – a reserve of oil and also a large reserve of gas including shale gas. Kazakhstan’s economy is the largest in the region with a GDP of $170.539 billion[iv] and increased GDP by 4.1 percent in 2018[v].

The exchange of goods was taking place between India and Kazakhstan through the then functioning Silk Route in ancient times. After 1991, both the countries launched an almost parallel programme of large scale economic transformation. Although the reforms were introduced in a different background, the desired result was the same. Both countries started to collaborate in trade and economic sectors. For enhancing cooperation, both countries signed an agreement of cooperation in trade and economic relations in 1992 and established Inter-Governmental Commission (IGC) in 1993 as an apex bilateral intuitional mechanism for developing trade, economic, scientific, technological, industrial and cultural cooperation. The Ministry of Petroleum and Natural Gas on the Indian side and Ministry of Energy on the Kazakh side are the nodal ministries with respective Ministers as the Co-Chair of the Commission.

The 13th IGC meeting proves very healthy in terms of encouraging investments. As, Mr Bozumbayev, Minister of Energy of Kazakhstan invites Indian investments in various sectors particularly in the hydrocarbon sector, infrastructure, peaceful use of nuclear energy, co-production of films, cooperation in food processing and Information Technology[viii]. The total Indian direct investments in Kazakhstan have been 245 million USD from 2005 to 2017, and Kazakhstan investments in India are 83 million USD. The investment trajectory between both countries is presented in the below-mentioned tables 1 and 2. Around 400 companies are registered in Kazakhstan presently with Indian participation and more than 100 of these have opened accounts in the joint Kazakhstan-India “Tengri Bank” in Almaty[ix]. National Bank of Punjab has a 49 percent share in Tengri Bank.  Further, more than 80 accounts of Indian companies during the last two years have been opened in the bank[x].

The first meeting of KIBC was held on May 19, 2016 in Astana. On the Kazakh side, the chairperson of the TengriBank board of directors Yerzhan Shaikenov has been elected as co-chair and on the Indian side, it is Dinesh Sood, a partner in Sun Capital Partners Consultants Ltd. Around 30 Indian companies operating in engineering, construction, logistics, IT, agricultural equipment, petrochemicals, pharmaceuticals and medicine, and around 40 Kazakh companies interested in establishing trading relations with Indian partners took part in the meeting. Besides, KIBC along with the Pharmaceuticals Export Promotion Council (Pharmexcil) under the Indian Ministry of Trade and Industry organized a Kazakh-Indian Pharmaceutical Business Forum on December 5-6, 2016, in which more than 40 Indian pharmaceutical companies participated.

Oil and gas are promising sectors for collaboration. Both countries have signed an agreement between KazMunaiGas and ONGC Mittal Energy Limited (OMEL) in January 2009 on Satpaev block for advancing oil and gas cooperation. Later India replaced OMEL with ONGC Videsh Ltd (OVL). In 2011, both the countries have singed a set of documents regarding the deal of handing over a 25 percent share of the satpayev block to OVL. National Atomic Company Kazatomprom and Nuclear Power Corporation of India signed a Mamorandum of Understanding (MoU) in January 2009 that steered atomic energy cooperation. Both countries have signed a contract in November 2009 for the supply of 2.1 thousand tons of uranium concentrate by 2014. On its expiry, a new contract was signed between Kazatomprom and the Indian Department of Atomic Energy for the supply of 5 thousand tons of uranium concentrate by 2019[xiii].

Thus, the potential sectors of cooperation and investment between Kazakhstan and India are energy including atomic energy, textile industry, information technologies, transport, space and military-related technical sector, medico-pharmaceutical sector, light industries in the southern part of Kazakhstan. Both countries have taken political, legal and institutional steps for encouraging collaboration. In 2015, the Kazakh-Indian Center for the Development of Information and Communication Technologies (IKCEICT) at the Eurasian National University named after LN Gumilev in Astana has been opened for enhancing cooperation in the IT sector. India has trained total of 11 specialists during the creation of the IKCEICT with the awarding of diplomas on postgraduate education in various IT disciplines.

During Prime Minister Narendra Modi July 2015 visit to Kazakhstan, both the countries signed a Roadmap of trade and economic and investment cooperation that includes projects on energy, engineering, metallurgy, IT, chemical industry and pharmaceuticals. The roadmap also provides the specific directions of collaboration between companies and sectors of the two countries[xiv]. During the Kazakhstan-India Investment Forum held on November 12-14, 2019 in Delhi, the two sides discussed a number of projects in the fields of energy, industry, agriculture, infrastructure and finance, as well as the capabilities of the Astana International Financial Center. The forum has held negotiations with NTPC Limited, Investment Fund of India, Millennial India International Chamber of Commerce, Industry and Agriculture[xv]. Presently, Kazakhstan is the largest trading and strategic partner of India in Central Asia. Both countries are important for sustaining economic growth to each other in the increasingly globalised world.