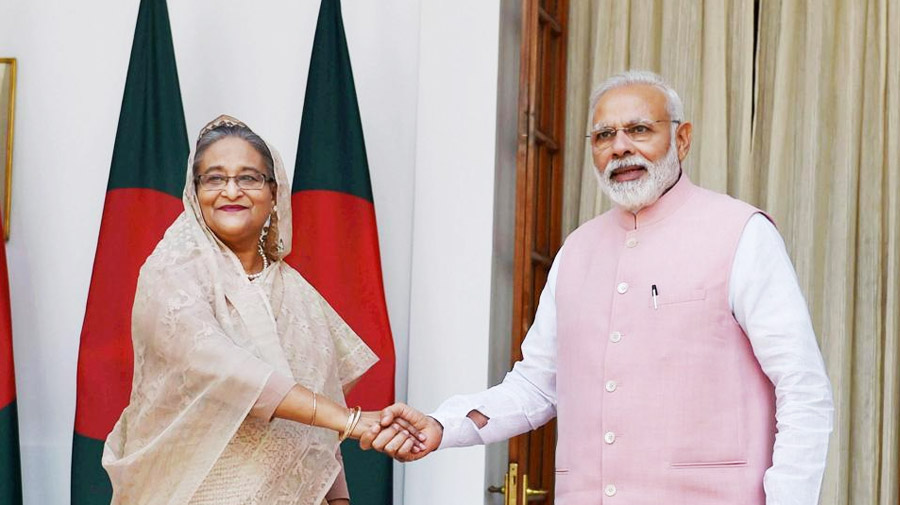 Rarely before have India and Bangladesh found themselves so robustly positioned, as now, to tango towards the most defining partnership taking shape in the South Asian region. A series of high-level exchange of visits including S Jaishankar’s first visit to Bangladesh as External Affairs Minister in August 2019, meetings of Prime Minister NarendraModi and Prime Minister Sheikh Hasina at various multilateral fora, convergence of opinion, thoughts and ideas on regional and global issues against the backdrop of a landslide victory of the two leaders in their respective national elections, are creating a transformative moment in the India-Bangladesh relations, based on “sabkasaath, sabkavikas, sabkavishwas”.

The seven pacts and three projects signed and finalised during the recent visit of the Bangladesh Prime Minister Sheikh Hasina – as a build-up to an increasingly multifaceted cooperation in the recent few years – has the diplomatic machinery in the two countries firing on all cylinders as India and Bangladesh expand their partnership to high technology, digital communications, atomic energy and space to water treatment plants and clinics. The two nations are creating milestones in trade, points out Prabir De, Professor, Research and Information System for Developing Countries (RIS), a leading Indian think-tank. “For the first time, Bangladesh’s exports to India crossed US$ 1 billion mark in 2018-19, a record 52 percent jump, compared to 2017-18. Bilateral trade between India and Bangladesh has grown steadily over the last decade catapulting Bangladesh to India’s biggest trade partner in South Asia. Our bilateral trade is $5 bn but the potential is $ 40 bn,” says Prabir De.

Even as the two sides prepare for the Commerce Secretary level talks, the next catalysts in the India-Bangladesh economic partnership are ready – expeditious commissioning of a joint study on the prospects of entering into a bilateral Comprehensive Economic Partnership Agreement (CEPA), pacts on supply of gas to Tripura, use of the Chattogram and Mongla ports to serve the north-east states and a skill development centre in Bangladesh to train the youth.

In short, a rising and emerging Bangladesh and a prospering India have huge synergies and are good for each other. There are two sets of triggers that are fuelling this optimism with enough ammo to keep the fire going.

There is first of all the economic dynamics flowing out of Bangladesh’s imminent graduation out of Least Developed Country status and a $ 300 mn economy powered by 7 percent plus growth in the last few years which, according to the World Bank, is set to continue, supported by a robust macroeconomic framework, political stability, and strong public investments. Prime Minister Sheikh Hasina has set a vision of transforming Bangladesh into a middle-income country by 2021, an economic model on par with Kuala Lumpur and a developed country by 2041. No doubt India comes across as a potential ally – with its robust economic fundamentals and proven credentials as Bangladesh’s biggest development partner – to deliver this dream and the Government is going all out to woo Indian businesses. Already, three Special Economic Zones have been set up in Bangladesh for Indian investors and recently two Government to Business MoUs have been signed between Start up Bangladesh and Tech Mahindra and the other between Bangladesh Economic Zones Authority and Adani Ports and SEZs. India’s progress on Artificial Intelligence and robotics is of interest to Bangladesh as future big drivers in the economic space.

India too, with high stakes in the region, finds intensified development cooperation with Bangladesh critical to keeping a foothold amid growing global interest in doing business with Bangladesh which has been given extension of 3 Lines of Credit amounting to USD 8 billion while cumulative Foreign Direct Investment from India to Bangladesh has more than doubled from USD 243.91 million in 2014 to USD 570.11 million in December 2018. “India and Bangladesh are not competitors but collaborators in making both countries prosperous and ensuring a better future for their people,” says PiyushGoyal, Minister of Commerce & Industry and Railways, urging Indian industry to be part of Bangladesh’s growth story with greater investment in infrastructure, technology and energy where Bangladesh has huge potential. “This will help to create more balanced trade between the two countries,” he adds. Indian companies are also investing in various sectors including telecommunications, pharmaceuticals, FMCG and automobiles sectors in Bangladesh.

The second is Prime Minister Modi’s neighbourhood First policy which in the context of Bangladesh finds manifestation in India’s strategic moves to encourage stronger regional economic integration through enhanced trade and connectivity. With a strong Bangladesh-Japan collaboration in Japan’s sourcing of skilled IT professionals from Bangladesh and significant Chinese contribution in the supply of military equipment to Bangladesh, India can ill afford to be crowded out. These calculations have played out effectively through solid trade deals that have fortified Indian presence in Bangladesh and the neighbourhood. Take for instance India’s readiness to extend duty-free and quota-free access for Bangladeshi exports to the Indian market which according to Prabir De explains the spectacular jump in Bangladesh’s exports to India. “Apparel and clothing drive Bangladesh’s export, contributing over 50 percent of bilateral exports in 2018-19. India’s DFQF market access scheme facilitated Bangladesh’s export. The export of apparel and clothing don’t face import duty in India,” points out De. Moreover, adds De, among LDCs, Bangladesh gets the highest market access in the non-fuel sector in India and has increased its share from 5 percent in 2014-15 to 7 percent in 2018-19.

These offer a significant backdrop to the more intense bilateral engagements in trade and investment that India and Bangladesh are chalking out through the proposed Comprehensive Economic Partnership Agreement. The CEPA holds out rich dividends for both. India and Bangladesh already have a goods agreement under the aegis of the 2006 agreement on the South Asian Free Trade Area (SAFTA) which governs the tariff regimes for trade. Under SAFTA, India has granted duty-free quota-free access to Bangladesh on all items except alcohol and tobacco. The missing middle is an agreement on services trade. According to Prabir De, Bangladesh, with an economy driven predominantly by agriculture and services, would be keen on an agreement that brings in the services component and investment. “Currently investment approvals from Bangladesh is a case by case basis, not in the automatic route. With this CEPA, we can bring Bangladeshis here with proper check and balance. There are health cities coming up in Guwahati and many Bangladeshis can avail of the facilities with regular and increasing aviation links. Education, medical sector and tourism will gain. The CEPA will also check the informal trade and this is what both countries would be happy to see,” says De.

The other strategic dimension of this burgeoning bilateral relationship with regional ramifications is connectivity. Increasing physical connectivity through air, water, rail, road offers a great opportunity for enhancing economic cooperation between Bangladesh and the North-Eastern states of India and beyond and in this respect, the clearance for the use of Chattogram and Mongla ports for movement of goods to and from India, particularly to and from the North-East, promises a win-win situation. India and Bangladesh are looking closely at the immense potential of movement of cargo using the inland water and coastal shipping trade apart from fast-tracking discussions on exploring the shared benefits that are possible from greater use of each others’ seaports for trans-shipment of their respective export cargoes.

Extending the scope of cooperation to rail connectivity, India and Bangladesh will also hasten the completion of modalities for provision of railway rolling stock supplies to Bangladesh and India may also consider the supply of a number of broad-gauge and meter-gauge locomotives to Bangladesh on a grant basis which will help enhance trade between both the countries. It is also time to explore digital connectivity including the use of new technologies such as blockchains for developing an online trade facilitation platform and risk management system to facilitate faster cargo clearance at border crossings.

It is clear that in the years ahead, India is looking at working with Bangladesh to realise the promise of a fully-integrated neighbourhood through transport and energy links. A crucial aspect of this larger plan is energy sharing projects, including private and public sector partnerships and the first steps have been taken with the inauguration of a project on sourcing of bulk LPG from Bangladesh to Tripura by using Bangladesh trucks during this visit of Prime Minister Sheikh Hasinawith huge bonanza – increase in exports, income and employment in Bangladesh as well as reduction of 1500 km transportation distance. Also in the pipeline are the development of a 765kV Double Circuit cross-border electricity interconnection between Katihar(India), Parbotipur (Bangladesh) and Bornagar (India), the additional capacity from which would enable more intra-regional electricity trade, including competitively-priced power generated from hydro-electric power projects in India, Nepal and Bhutan.

India and Bangladesh are today, in what External Affairs Minister calls, the “sonaliadhyay” (Golden Age) of their ties. It is time to set more ambitious targets, strengthen the commitment to work together in the international arena and make the mutually beneficial partnership deliver on the promises.

Nivedita Mukherjee
Author is a specialist in international affairs (trade and investment), strategic communications and policy advocacy with M.Phil in International Relations from the University of Delhi.
Tags:
CEPA neighbourhood Bangladesh SAFTA SheikhHasina
Share:
Share this...