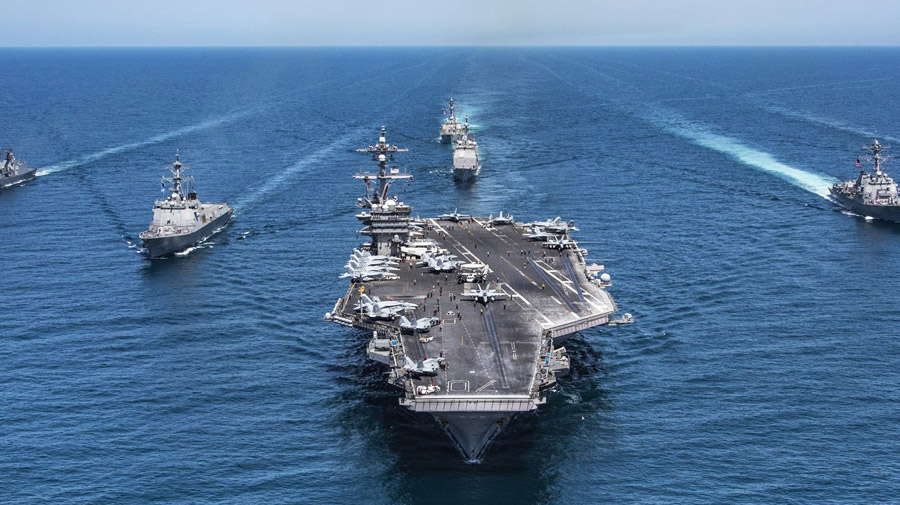 As stated in the report, the emerging strategic competition between the US and China in the region will have implications for other countries as well. The first Minister-level meeting of the Quadrilateral Strategic Dialogue (henceforth “the Quad”) between India, Australia, Japan and the US was held on 26 September 2019 in New York.[ii] This development could be seen in the light of India’s negotiations for logistics exchange agreements with some of the Quad member countries.

A defining moment of India’s emerging role in the Indo-Pacific is the signing of logistics exchange agreements and negotiation for similar agreements with the US, Russia, Australia, Japan, Singapore and Republic of Korea (South Korea). In 2016, India has signed the Logistics Exchange Memorandum of Agreement with the US to facilitate Indian military access to military facilities of these countries for fuel and other provisions.

In fact, New Delhi is engaging in negotiations with the remaining countries to enhance its far sea operations in the Pacific Ocean. Security of the sea lines of communications (SLOCs) and protection of overseas interests of India would push forward such arrangements in future. Both India’s “Act East policy” and “Indo-Pacific vision” call for strengthening economic and strategic cooperation with the countries in the western Pacific Ocean.

In analysing China’s geopolitical anxieties about the “political spatial concept” of the Indo-Pacific, Chengxin Pan argues that the concept has the “potential of fuelling regional rivalries and exacerbating security dilemmas” among the major powers.[iii] In fact, the report published by the United States Studies Centre in August 2019, underscores the fact of strategic competition and rivalries in the region. At the same time, China’s Belt and Road Initiative (BRI) launched in 2013 has increased geopolitical anxieties among many countries. India’s position on BRI is informed by both violation of India’s territorial integrity and sovereignty and the geopolitical aspects of BRI.

Besides, China’s has expanded the anti-access and area denial capabilities in the western Pacific Ocean affecting security environment in the region. It includes the construction of artificial islands in the South China Sea where China is dealing with complex maritime boundary disputes with its Southeast Asian neighbours especially Vietnam and the Philippines. While China denied any military installations on these islands at first, Beijing has acknowledged the construction in what is called “limited defence facilities” on these reefs-turned-islands. Also, China claims to have constructed these facilities to cope with security threats and for self-defence. This carries the deep undercurrent of security dilemmas in operation in the Indo-Pacific.

Chinese Defence Minister Wei Fenghe’s speech delivered at the 18th Shangri-La Dialogue on June 2, 2019, underscores the rising tensions and competition between major powers in the Indo-Pacific region.[iv] The South China Sea dispute is one of the destabilising issues in the region. Wei Fenghe categorically opposes the US’ “actions and words” on Taiwan and South China Sea issues. Moreover, he said that China will fight the US till the end for protecting its sovereignty, security and development interests.

In this regard, understanding India’s Indo-Pacific vision is important. Indian Prime Minister Narendra Modi’s Keynote Address at Shangri-La Dialogue on June 1, 2018, reflects India’s vision and aspiration to play a larger role in the international affairs.[v] Most importantly, India’s relationship with countries in the region is emphasised. He states that developments in the Indo-Pacific region will deeply influence the destiny of the world in the 21st Century.

One very important aspect of the speech is a maritime aspiration. Prime Minister Modi refers to India’s long history of maritime connectivity as part of the Indian civilisation and important place of the ocean in human civilisation. Also, he mentions the Malacca Strait and the South China Sea which connect India to the Pacific and major partners of India such as ASEAN, Japan, Republic of Korea, China and the Americas. Through this articulation, India’s aspiration to become a maritime power in future and maritime security cooperation with other countries using forums like the Indian Ocean Naval Symposium is underlined. The keynote address also emphasises the importance of the Indian Ocean Rim Association (IORA) for regional cooperation.

However, India’s vision of an “open, stable, secure and prosperous Indo-Pacific Region” will come along with India’s engagement for deeper economic and defence cooperation. It also includes the Comprehensive Strategic Partnership with Indonesia and vision for maritime cooperation in the Indo-Pacific. As far as defence cooperation is concerned, the keynote address refers to India’s partnerships in the Indo-Pacific region for peace and security, as well as humanitarian assistance and disaster relief. Important maritime exercises include the “Malabar Exercise” and “Exercise Milan” in the Indian Ocean and RIMPAC in the Pacific Ocean.

At present, India-China relations in the Indo-Pacific region do not have a clear common vision and goal. The two neighbours are working on addressing several challenges while strengthening the closer developmental partnership at the same time. Without addressing some of the core problems such as boundary dispute, cooperation and competition between the two neighbours will continue amidst uncertainty, unsettled questions, claims and clashing visions and competing models.

As India’s economic and defence cooperation with countries in the East increases, India’s two-ocean strategy will meet China’s two-ocean strategy spanning the Indian Ocean and the Pacific Ocean. It is a fast developing dynamics. This development will make the shift of the world’s geopolitical centre of gravity to the Indian Ocean.[vi] China’s increasing inroads into South Asia has to be compensated by India’s reach to the western Pacific Ocean. This development will lead to naval build-up in the two countries to ensure maritime security and maritime domain awareness.

Though China’s construction of seaports in Gwadar, Hambantota and Kyaukphyu is a cause of concern in India’s strategic neighbourhood, the new trend is far significant than port construction along the major international shipping routes. China’s latest white paper on National Defence entitled “China’s National Defense in the New Era” was issued in July 2019.[vii] The document has some new aspects of China’s defence policy, capabilities and preparedness. The defence white paper emphasises building capabilities to protect China’s overseas interests. Towards this mission, China is working on security and military cooperation with other countries. The defence white paper states that China needs to address deficiencies in overseas operations and support as part of building far seas forces and develop overseas logistical facilities. This call came following the establishment of China’s first overseas military base in Djibouti on August 1, 2017.

In the recent past, China has strengthened maritime diplomacy in its neighbourhood. China’s naval presence is increasing in the Indian Ocean through limited in number and capabilities. However, the development of seaports and other overseas assets owned and operated by Chinese companies in Pakistan, Sri Lanka, Kenya and Bangladesh have brought China into the South Asian region. There have been regular maritime exercise and port calls between China and the littoral states in the Indian Ocean. Chinese naval vessels including nuclear submarines have been docked at Karachi and Colombo ports.

As far as Southeast Asia is concerned, for the first time, navies of China and 10 ASEAN countries conducted the joint maritime exercise in Zhanjiang, Guangdong Province from October 22 to October 28, 2018. Besides, China’s military and security engagement with ASEAN countries have strengthened in the recent past. China, Malaysia, Thailand conducted joint exercise along the Strait of Malacca code-named “Peace and Friendship 2018” from October 20 to October 29, 2018. Moreover, China has gained access to Malaysia’s Kota Kinabalu port for stopover rights.

Mutual trust and understanding between China and Singapore have played an important role in the successful holding of the China-ASEAN Maritime Exercise-2018. In October 2019, China and Singapore signed an upgraded defence agreement to strengthen bilateral military exercise, provide mutual logistics support and establish a regular dialogue between the two defence ministers.[viii] Similarly, India signed an agreement with Singapore to get access to the Changi Naval Base in 2018.

A maritime arc drawn stretching from the Gulf of Aden to the Bering Strait will experience the Alfred Mahan moment for both China and India in the coming years. However, the two countries have to strengthen cooperation in the maritime domain to continue competition along this arc and beyond. The Indian Ocean Naval Symposium (IONS), ASEAN Defence Ministers’ Meeting- Plus (ADMM-Plus), Shangri-La Dialogue and the Beijing Xiangshan Forum would play a significant role in dialogue and negotiation for managing the differences and other conflicting issues. India’s naval reach to the western Pacific Ocean also could help calm down the ripple effects of China’s inroads to South Asia and the Indian Ocean.

Meanwhile, retaining its autonomy during the phase of a competitive relationship between India and China which also involves the US and Japan in the region remains a “more serious and plausible challenge” for Southeast Asia. Beyond the ASEAN centrality, the centrality of the Indian Ocean in the emerging geopolitical order may unfold naval competition and coalition formation at different levels of perfection for ensuring maritime security, peace and stability in the region. As geography continues to be an important factor, the strategic land-sea interface region covering the Andaman Sea, Strait of Malacca, Indonesian archipelago and the South China Sea would see more activities as part of the complex dynamics of cooperation and competition between India and China. Lastly, a solidified “Quad” would be interpreted as the containment policy of China. In international politics, both internal and external balancing can happen in different manifestations to deal with power asymmetry.