American Global Dominance: To be sustained or suspended? 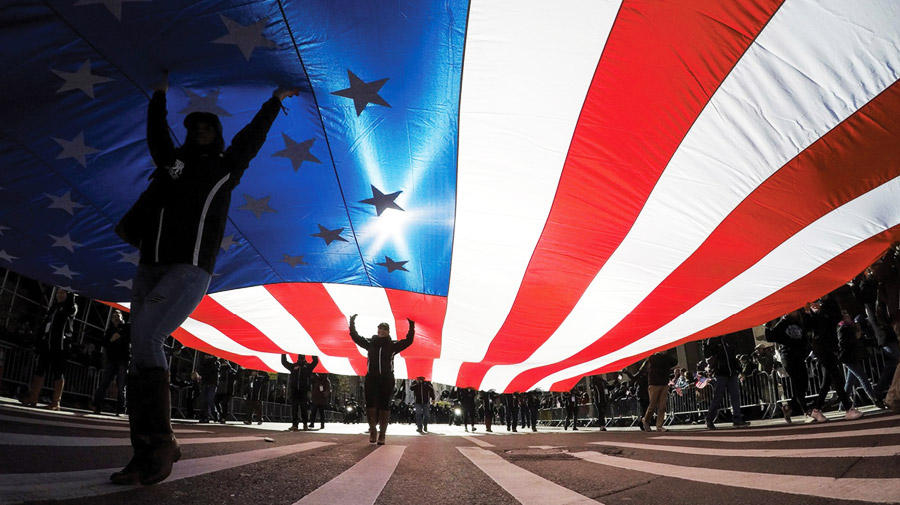 US surpassed the UK as the largest economy since the late 19th century and has maintained its supremacy by virtue of its mightiest military in the world, its geopolitical attributes and state-of-the-art innovative mechanisms. Its global hegemony was further cemented after the collapse of the USSR, with other countries competing for regional leadership. Its global dominance was supported by four interacting pillars: financial institutions, military buildups, scientific innovations and cultural attractions.

The post-WWII international financial order was built upon the hegemony of US dollars. As the sole hard currency dovetailed with gold, US dollars attracted the lion’s share of the world gold reserves and hijacked the world economy through central banks of different countries enchanted with monetarism to finance the American warfare and its economy.

The US military preponderance rests with its global alliance network, covering all strategic quarters around the world through its 100-plus military bases, delivering 300,000 military combatants capable of waging two regional wars simultaneously and controlling the hubs of pipelines transporting energy serving as the blood vessels of modern industry. Underlying this military might is the astronomical military expenditure, which amounts to 716 billion US dollars in 2018, beating the sum of countries ranking 2nd to 15th, which is still on the rise.

The US boasts the best incentive mechanisms for scientific and technological innovations. The US took a decisive lead in the fields of fundamental sciences and military science, its excellence best illustrated by such leading scientific projects as Manhattan Project, Apollo Program and Human Genome Project. The US still reigns supreme in Artificial Intelligence and other cutting edge technologies. Its unrivalled higher-educational system serves as a cradle for leading scientists and its generous scientific funding is a compelling invitation to talents around the world.

American culture has been hailed as representing universal values under the packaging of Hollywood studios and many US-based transnational corporations, Disney, Universal Studio, McDonald and KFC being just a few on the long list. Driven by the mentality of “building a city upon the hill”, the US resorted to all possible means to displace other alternatives of political organization. The young generations around the world are lured to the appeals of liberal democracy, which lays a solid foundation for the soft power of the United States. This dimension of the US hegemony permeated into the backbones of the other three pillars, magnifying the preponderance of the US dominance.

This four-tiered supremacy has been supported by a set of international regimes, of which the prime founder is the United States. As the main architect of the post-WWII global order, the US reaped great benefits as the rule-maker of the international political-economic chessboard. Using the TNCs as the agent, the US sponsored and promoted the globalization process, involving most economies in the global market. Through World Bank and IMF, the US sought to de-industrialize the peripheral countries by favoring investments in transportations and communications so that the raw materials and energy resources can be channeled to the US through the leverage of international financial system, thus locking the underdeveloped countries in the lower end of the international division of labor. Besides, by collaborating with the elite classes of the peripheral countries, the US diverted their governments’ attention away from agriculture through exporting cheap foods into those countries in the initial stage. The rudimentary agriculture sector can’t provide sufficient food to the nationals due to their poor food technologies which exposed these countries to the highly volatile international food market, of which the central player is the US. Under the pretext of liberalizing the international market, the US manipulated the international food pricing mechanism to exploit the vulnerable third world countries.

In a unipolar world, the hegemonic position of the US can hardly be defied except the hegemony itself, especially when the superpower began to undermine the very basis of global order initiated by itself. The first two decades of the new century witnessed the rise of the rest, with BRICS posing the most challenge to the predominance of the West. But measured by whatever indicators, the US remains the super power through the Pax-Americana, in which the US contributes most public goods for global governance. Donald Trump is chosen to make a change. In the name of “America first” and “make America great again”, Trump favors a “principled realism”, which marks a policy premised first and foremost on U.S. interests and a farewell to globalist sloganeering. Accusing the Paris Climate Accord as a “massive redistribution of United States wealth” to other countries, Trump made the case that the accord fundamentally disadvantages the U.S. economically, relative to other countries and led the country to withdraw from Paris Climate Summit. More troublesome is the fact that even if this would compromise the US credibility in rallying global efforts to combat this cross-border issue, Trump’s decision fared well in the domestic public opinions. Fueled by an anti-globalist populism at home, Trump has gone further in withdrawing from the international regimes buttressed by its supremacy in national strengths. When running against Hillary Clinton for the US presidency, Trump opted a strategy prioritizing the interests of the blue-collar workers in the rustic states, which shaped his calculations in designing his foreign policy.

At the close of 2017, Trump launched his first strategy for national security, which mapped out his strategic priorities: he reiterated his promise to combat the global terrorisms, identified Iran and DPRK as “Rogue regimes”, and more importantly shifted the strategic priorities of his immediate predecessors to treat China and Russia as mounting the most threat to the national interests of the US. To meet these and other emerging challenges, Trump strongly stressed rebuilding the military, including among other things, advancing the US missile capabilities. Viewing the INF Treaty as a hurdle preventing its nuclear power deployment in such key areas as the Asia-Pacific and damaging its own hegemony and interests, the US had repeatedly requested amending or withdrawing from the treaty. In February 2019, the US withdrew from the Intermediate Range Nuclear Forces Treaty, which touched off a lot of controversies and possible vicious cycle in an arms race in the Eurasia Landmass. After the US removed the shackles of the INF Treaty, the US will reinforce its frontier deployment in areas of strategic concerns, with the Middle East and the Asia-Pacific region prone to a hotbed for missile races, and Europe under mounting pressures due to Russia’s counter-measures. In August, Trump had with “varying degrees of seriousness” expressed his interest in purchasing Greenland in the North Atlantic, which was ridiculed by a former premier of Denmark as an out-of-season April Fool’s joke. Infuriated by this blatant rebuke, Trump cancelled the scheduled visit to Denmark without realizing that his proposal poses an insult to the sovereignty integrity of Denmark in the first place. The nutshell of the principled realism can be boiled down to a principle of opportunistic utilitarianism: promoting the ideals of honoring the international agreements when favorable and quitting it when unfavorable.

A just international order is based upon the principle of the veil of ignorance in combination with the liberty principle and the difference principle, which can be considered as an extension of the social contract in international governance. As a novice in foreign affairs, Donald Trump is leading the US ship into a track of ruining the bases of an international order underlying the global dominance of the US. The next general election is around the corner, given the prominence of domestic issues on the election agenda, Trump will very likely carry the US further along this wrong path. Who could come out to reverse this misguided trajectory? Chances are that the world need to wait another one year, but more likely another five years.