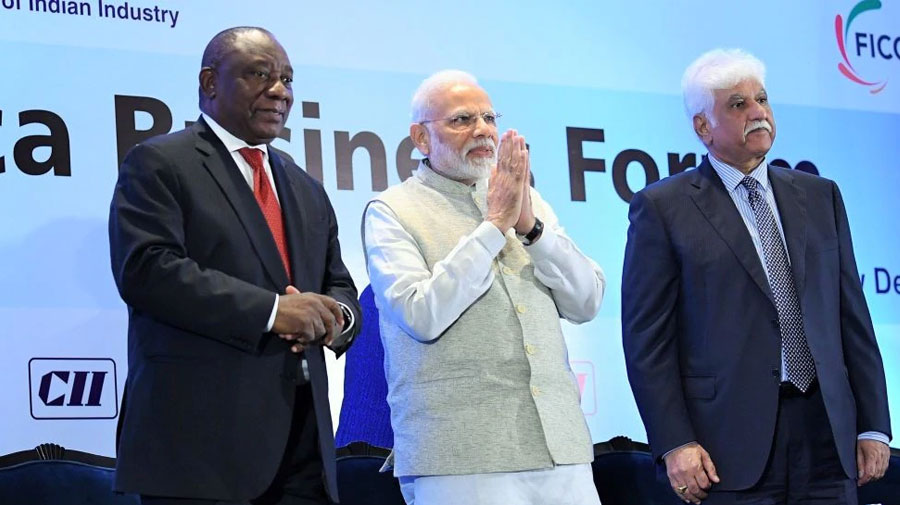 India-South Africa cooperation needs to be expanded beyond current levels. The bilateral dialogue should include a critical review of developments not only in Africa but also in Asia.

The Red Fort Declaration forms the backdrop of the Strategic Partnership signed in March 1997 by the then South African President Nelson Mandela and Former Prime Minister of India HD Deve Gowda at the Red Fort in Delhi. But, what does the Red Fort signify? At the Red Fort, on August 15, 1947, the past and the present had coalesced to mark a newly independent nation’s step towards the future. The signed declaration contained the aspirations and shared values of Afro-Asian solidarity which have given rise to an enduring partnership.

South Africa’s future is increasingly tied up with that of India. While trade and investment between the two countries is intensifying, they share long-standing historical ties and both countries are important players in the global South. As India emerges as a major economic power, the need to understand these links becomes ever more pressing. Can the two countries enter balanced forms of exchange?

A number of bilateral agreements have been concluded between the two countries since assumption of diplomatic relations in 1993 in diverse areas ranging from economic and commercial cooperation, defence, culture, health, human settlements, public administration, science and technology and education.

According to the IMF, India’s economy is the sixth largest in the world and the third largest in terms of purchasing power. With a population of 1.25 billion people, India’s influence on the global stage is well established and growing. India’s long-term economic prospects are promising due to high savings and investment rates, a young population and integration into the global economy with the potential to become one of the three largest economies in the world in the next 20 years and the third largest consumer economy by 2025. India’s overall economy is ready for a big take off.

On the other hand, South Africa is going through a rough patch with a growth rate that any objective view would perceive gravely. South Africa would have to focus on three core areas in the attempt of improving its economic prospects. These are emphasis on investing in education, especially science, technology and mathematics training; being open to the exchange of talents with other countries and opening up the economy as an investment destination. India’s policy reforms to encourage investment have resulted in it becoming the top FDI destination in the world. While South Africa is the largest economy in Africa after Nigeria, it is still relatively small when compared to India.

India is South Africa’s seventh largest trade partner. Imports from India account for four percent of the total while imports from China account for approximately twenty percent. This is a large gap when considering the strong cultural and political ties between the two nations. South Africa had the largest Indian diaspora in the world two decades ago. The bilateral commercial and political relationship between South Africa and India is special and based on common colonial past and shared histories. Many companies from India have become entrenched in South Africa, the flow of Indian business into Africa has increased significantly since 2008.

India is South Africa’s sixth largest trading partner in Asia, growing steadily from US$4.7 billion (Rs 318 billion) in 2007 to close to US$10 billion (Rs 605 billion) at present. Total trade reached a peak of US$15 billion (Rs 1 trillion) in 2012, before the global economic slowdown and domestic political factors put a brake on the rapid expansion.

South Africa has been actively involved in multilateral organizations, such as the India-Brazil-South Africa Dialogue Forum (IBSA), the New Asia-Africa Strategic Partnership (NAASP), the Indian Ocean Rim Association for Regional Co-operation (IORARC), and the BRICS .

Both India and South Africa are now working to boost trade volumes over the next five years to reach US$20 billion (Rs 1.3 trillion). A recent joint study by the Confederation of Indian Industries and Price Waterhouse Cooper confirms that Indian companies have cumulatively invested over US$4 billion (Rs 260 billion) and created more than 18,000 jobs in South Africa. The same report states that at present, there are over 130 Indian companies set up in South Africa. Several Indian companies also collaborate with Africa-based foundations such as the First Rand Foundation and sponsor India-Africa exchange programs for skill development. Mostly based on the Information Technology (IT) sector, the programmes aim to improve the employability of African graduates by providing international work experience and training.

India-South Africa cooperation needs to be expanded beyond current levels. The bilateral dialogue should include a critical review of developments not only in Africa but also in Asia. In this context, South Africa should also continue to follow a balanced approach towards Asia, recognizing its growing economic strength, innate diversities and an essential need and inclination towards multi-polarity.

India will benefit from South Africa’s evolving assessment of the political and security situation, reform of the African Union, progress towards Agenda 2063, food security and climate change challenges and other Pan-African developments. Both countries would need to engage on extensive dialogue involving governments and other stakeholders on various connectivity initiatives originating in Asia. These include Belt and Road Initiative, Asia-Africa Growth Corridor, and Free and Open Indo-Pacific. The relations between the two nations need to be nurtured with care and sensitivity if they have to be kept on the path of consistent growth and expansion.

About two-thirds of the peoples in Africa and India are below 35 years of age, so drawing inspiration from the Red Fort Declaration of March 1997, some of the more pressing questions are-

a) How do both countries review progress and address key issues pertaining to their bilateral, regional and global agendas, in order to define their “strategic partnership”?

b) Giving high priority to the promotion of trade, investment, economic, technological and development cooperation, how do we address these key intervention areas:

i) Skills development and how obstacles to expansion of cooperation in this domain can be identified and removed.

ii) Given the considerable progress of South Africa in the Blue Economy, how will a focused bilateral dialogue involving other stakeholders (including national industry chambers) help in crafting a plan to forge close collaboration in developing sustainable fisheries, managing marine resources, exploring renewable energy, promoting tourism, and expanding maritime connectivity?

iii) How to connect both South African and Indian think tanks as contacts are sporadic, perhaps driven by subjective factors. How do we engage a holistic, structured and sustained interaction among scholars in order to assist policymakers? Can an initiative be formed in this regard, expanding the footprints of scholarly interactions beyond national capitals? Also, can the agenda include G-20 issues and the Asia-Africa Growth Corridor, besides regional and bilateral issues?

iv) Also, how would both countries create new measures that make both India and South Africa’s public diplomacy more effective and result oriented.