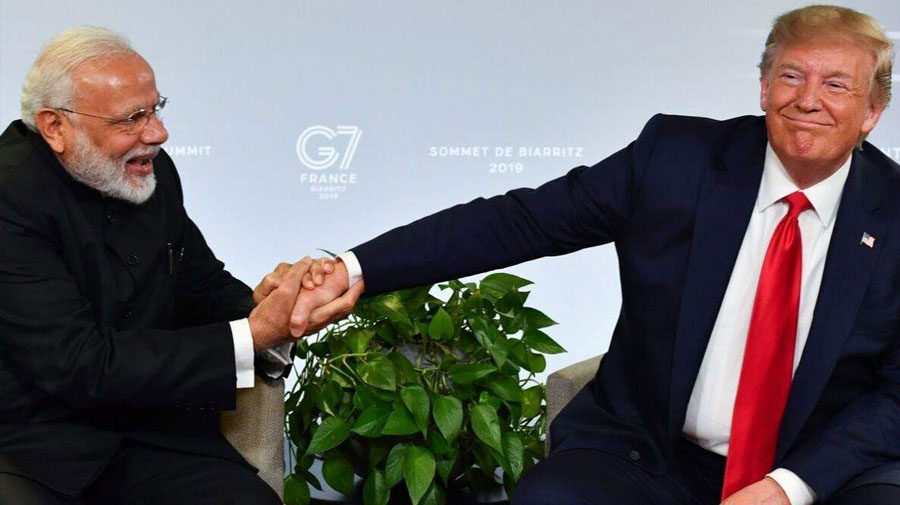 India-US ties have always been under the realm of uncertainty, post-cold war. Despite that, India chose to remain agnostic towards both the superpower. U.S.A largely perceived India closer to USSR because Russian history and literature were continuously part of Indian universities and elite culture. Nuclear test added fuel to the fire.

It is only after the emergence of China as an economic power in Asia and the world, US and India started coming closer as strategic defense partners. India started shifting towards US popular culture after the disintegration of USSR and series of Indian economic reforms post-1991. The story of the paradigm shift of strategy of both India and the US towards each other is dramatic and could be seen as the immediate need of the hour.

India detonated its first nuclear device in 1974 becoming the first country outside the UN Security Council to have possessed nuclear capabilities. The move irked many countries including the United States which proclaimed several economic sanctions against India. As a follow-up act, India refused to sign the Non-Proliferation Treaty in 1978 which had provisions of inspection of all nuclear facilities of India by the International Atomic Energy Agency. This estranged India’s relation with the US for the next two decades.

To date, India is a key global strategic partner to the United States of America with a legacy of shared trade of 142.1 billion dollars with a growth rate of 7.59 percent per annum. In the last two decades, the relationship of both countries has improved significantly through simultaneous efforts of both these economic giants in areas of trade, defense, nuclear, space and cultural cooperation.

Both countries started coming closer as India pushed its economy into a series of reforms in 1991. Open access market led to the forming of several economic ties between India and the US. The relation started to normalize with the US ever since and in a matter of ten years, all sanctions were lifted from India. Today, India stands tall as a major partner to the US in the Asia Pacific region.

1. Both countries agreed to start a dialogue on energy and security in the March meet of US Secretary Condoleezza Rice and her Indian counterpart. 2. Two months later, New Delhi and Washington signed a new defense framework which prioritized defense cooperation in maritime security and humanitarian assistance between both the countries. 3. In October, both countries conducted the largest naval exercise followed by frequent land and air exercise. 4. But the most crucial and awaited deal happened to be the Civil Nuclear Deal. The deal lifted the three-decade-old prohibition of nuclear trade between India and the US. Under this, India agreed to separate its civil and military facilities and put civil nuclear facilities under the scanner of International Atomic Energy Agency (IAEA). In return, the US agreed to work for civil nuclear cooperation with India.

In the wake of China’s ambitious intentions to dominate the Asia-Pacific region, India has become a strategically important partner to the US in this region in the last two decades. This can be easily seen if we observe the recent chain of events.

The Barack Obama administration made India its major defense partner and extended its support in the transfer of technologies. In 2016, the US and India signed a crucial pact of understanding in which both countries’ military can use each other’s assets and bases in case of need making the joint operations smoother. The United States renamed its largest command i.e. Asia Pacific Command to Indo-Pacific Command recognizing India’s importance amidst increasing tension in the South China Sea region. The latest landmark in India-US relation is the Communications Compatibility and Security Agreement (COMCASA) which allows interoperability and sale of high-end military technology between the two nations.

A renewed framework for the Indo-US defense relations took both countries in a new era of friendship based on a common world view and shared national interests.

In his much-discussed visit to Vietnam in 2018, President Donald Trump had stated America’s vision of an open and free Pacific in which every country remains strong, sovereign and prosperous. In this light, the US is actively seeking opportunities for collaboration with BIMSTEC where India remains in central focus, it being the pioneering country amongst BIMSTEC collaborators.

Though India’s defense cooperation with the US seems quite amiable and strong with multiple defense deal and joint exercises, India’s trade relations have not been as smooth.

A recent report published by Atlantic Council titled ‘Trade at Crossroads: A Vision for Trade Relationship’ expresses concern over growing trade tensions between India and US. The report begins by saying that Indo-US trade relationship is rapidly approaching a point of crisis. It further says that existing institutional arrangements are not able to address growing trade conflicts while protectionist instincts of both governments are acting as a catalyst amidst growing tensions.

The report critiques the efforts of both sides and states that though representatives of both the nations have tried to understand the issues of each other but have failed to arrive at any significant conclusions. In April 2018, the US decided to revisit the Generalized System of Preference (GSP) status granted to India in order to check whether India offered equal access to its market or not. Later, GSP i.e. preferential treatment benefits were terminated by the US.

Recently, Donald Trump called India the ‘Tariff King’, though, the validity of his statement can be questioned as tariff rates of many countries are higher than India. India retaliated by increasing tariffs on 28 items including almond, pulses, walnuts coming from the US. This protectionist attitude of both countries has been pointed out by the Atlantic Council’s report.

The report has recommended several immediate measures to avoid turning the current state of affairs in a trade war. It has strongly recommended managing current tensions in order to reach initial agreements. The Indian bureaucracy of the country’s Ministry of Commerce and Industry is not empowered enough to negotiate as efficiently as their American counterparts. The report has recommended that this administrative flaw be immediately addressed. In other recommendations of the report, the need for institutional reforms, exploring trade opportunities for other significant market sectors openings were in prime focus.

India and the US shall continue to remain global strategic partners for clear interdependence on each other owing to many political and economic compulsions. At the same time, India continuously needs to enhance its defense capabilities, grow the domestic market and boost the manufacturing and service sectors in order to remain more relevant than before in a continuously changing global scenario.

Aditya Kumar
Author is an assistant professor at school of media and communication studies, Tula’s Institute. His area of interest is media, caste and democracy. He also keeps an eye on International Relations of India.
Tags:
Indopacific US India NarendraModi DonaldTrump COMCASA GSP SouthChinaSea IndoUS
Share:
Share this...