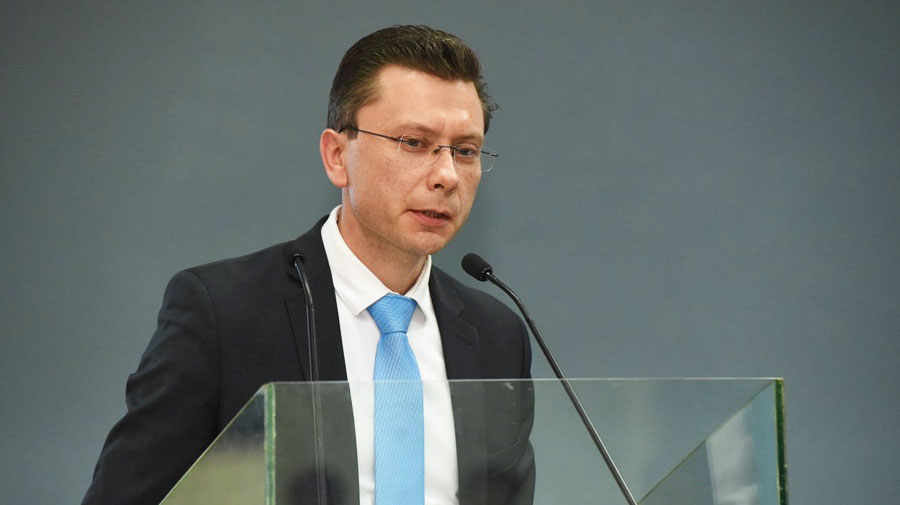 Mr Roman Babushkin, Deputy Chief of Mission, Embassy of the Russian Federation, spoke to The Diplomatist on Russia-India cooperation and other issues.

Q. The Joint Statement issued at the end of Prime Minister Narendra Modi’s visit to Vladivostok looks at every aspect of the relationship. What would you consider the most significant aspect of this meet and what was the major outcome at the 20th India – Russia Annual Summit?

The 20th India-Russia Annual Summit held in Vladivostok is a remarkable development in the history of cooperation between our two great and friendly countries since we have opened up a new page in our ties based on the principles of mutual respect, understanding and support as well as complementarity and synergy of development strategies.

Indeed, this Joint Statement is telling that along with traditional advanced areas of interaction such as energy, science and technology, military and technical partnership, extensive people-to-people contacts, we are moving towards further expansion of our multifaceted relations by enhancing cooperation in the Russian Far East. Even a brief analysis helps to conclude that potentially this is a game-changing move.

First, we are focusing on utilizing mutually beneficial opportunities originating from the Far-Eastern Region, which is extremely rich in natural resources and industrial capacities. The Russian Government is successfully implementing dedicated national programmes ensuring maximum openness and economic and social integration of this region in the Asia-Pacific community. For this purpose, favourable conditions such as preferential tax regimes and various government support measures have been introduced in order to ensure a very attractive business and investment climate there. As an outcome, we see the Far East economy has grown three to five times higher than the rest of the country – up to 23 percent in the recent five years!

So, our Leaders decided that our countries will go together to make the Far-Eastern dimension a new success story in the bilateral partnership. The unprecedented announcement by Prime Minister Modi to establish a USD 1 bn dedicated credit line can be seen in this context.

Second, there is an obvious indication that the Russian Far-Eastern strategy and the Indian Act East Policy dedicated to both countries’ extended outreach to the Asia and Pacific Region do complement each other very well!

As far as particular fields is concerned, we have already started working out in practical terms the possibilities of expansion of the Indian participation in the development of hydrocarbons fields in the region, including the Arctic offshore zones (oil and natural gas reserves are still under the process of estimation, however, it is already clear that they would sustain for decades).

Moreover, the Leaders blessed us with clear instructions to expand oil supplies from Russia to India, and the relevant discussion between the Governments and concerned companies is well underway with the aim to prepare long term arrangements. That would help to further diversify the Russian export and the Indian import of hydrocarbons.

Along with cooking coal production, gas fuel, alternative energy, shipbuilding and diamond industry, we also expect solid developments in the area of regional infrastructure. The Indian partners are invited to participate in modernization of sea- and airports in the Far-Eastern region.

Q. In recent years, trade between India and Russia has been around $10 billion, but both countries are absent in their respective list of top 15 trading partners. In which areas do you see room for improvement?

No doubt that the progress in implementation of agreements in the above and other related directions would stimulate the expansion of the bilateral dialogue on other topics including mutual trade and investment cooperation.

Some important measures are in the pipeline to this end. Particularly, we are working on the re-establishment of the direct Vladivostok-Chennai maritime sea route, which would support to overcome a connectivity gap between the two countries. The work is going on to raise the effectiveness of the North-South Transport Corridor by the introduction of the high-tech solutions for shipment satellite surveillance and further synchronization and facilitation of customs regimes.

Moreover, we are investing a lot to an early conclusion of the Free Trade Area (FTA) between the Eurasian Economic Union (EAEU) and India, which will not only bring an impetus to further liberalization for trade but also stimulate overall economic exchanges among the member states of the future arrangement.

Remarkably, we also tend to employ the growing quality of mutual participation in huge trade and investment fora held in both countries. Along with the Saint-Petersburg International Economic Forum and Vibrant Gujarat and some others, the Eastern Economic Forum (EEF) becomes an extremely important platform for the promotion of the structured bilateral dialogue as well as B2B and P2P exchanges.

Russia and India are committed to ensuring trade facilitation through the extended use of national currencies. In mutual payments, national currencies volumes have increased fivefold in recent years – up to 32% in 2018. Both our countries are deeply engaged in the dedicated financial dialogue in the framework of the bilateral Working Group on Banking and Financial Matters as well as in BRICS.

All the measures being undertaken in this regard would definitely make our goal to achieve the turnover up to USD 30 bn by 2025. Importantly, we have signed the Action Strategy for advancing bilateral Trade-Economic and Investment Cooperation at the Vladivostok Summit, which would further streamline our dedicated efforts.

Q. One of the most promising and at the same time challenging areas of Russia-India relationship is cooperation in science & technology. The history of bilateral ties proves that Moscow and New Delhi managed to build successful collaboration in S&T. What lies ahead for Russia-India scientific and technological partnership?

Our two countries are blessed with a tremendous quality of human capital with a strive for innovations in our DNA. Historically, we have developed a solid scientific and technological base, which helped us to successfully cooperate in this area for decades already. Starting with the support of the Soviet Union in the Indian industrialization, now we have reached an advanced partnership. Relevant officials and scientists enthusiastically implement long-term programmes covering joint research in science and technology as well as the development of high-tech products in such spheres, like telecommunications, robotics, artificial intelligence, nanotechnologies, space, pharmacy and others. At the Vladivostok Summit, the two sides signed the MoU between the Department of Science & Technology of the Republic of India and the Ministry of Economic Development of the Russian Federation for cooperation in the field of Innovation.

In the era of digitalization we are naturally involved in a dialogue on the Fourth Industrial Revolution with the goal to narrow down the technological gap between developed and developing countries.

Q. Considering the competitors of Russia in the Indian arms market, what steps Russia is undertaking in this direction?

Let’s be very clear on that: healthy competition helps to find new ways for improvement, while artificial limitations such as illegitimate unilateral sanctions and geopolitically motivated pressure imposed by some countries do create uncertainty and mistrust in the markets.

We have no reason to be afraid of both since the achieved advanced level of the Russian-Indian military and technical cooperation historically constitute one of the pillars of the strategic partnership between the two countries.

This is a two-way movement based on an extraordinary mutual interest proceeding from the fact that the Indian Army is equipped with about 70 percent of the hardware provided by the Soviet Union and Russia.

Currently, we are working in the framework of the 2011-2020 Long-Term Program for Military and Technical Cooperation and further expansion of interaction in this area, including by joint development and production of military equipment, components and spare parts, improving after-sales service system. By the way, the relevant Inter-Governmental Agreement was signed in Vladivostok, which is a considerable step ahead.

The overall amount of deals which we are implemented at the moment exceed USD 14.5 bn including sophisticated projects such as S-400 air defence systems’ supplies, a joint production of Ka-226 multipurpose helicopters and Kalashnikovs machine guns in India. Both Sides are committed to the timely realization of the contracts.

We note growing mutual interest in further developing cooperation on military affairs. Our countries enjoy the largest in scale annual bilateral exercises “Indra” with combined participation of all three – Army, Navy and Air – services. Regular dialogue between Ministers of Defence and NSAs along with other concerned agencies and state-owned-corporations is also a sustained practice.

Q. As far as the energy is concerned, how is cooperation between Russia and India in the nuclear field being developed?

Nuclear power cooperation is another area, which we can be proud of. Russia as of now is the only foreign country being in practical terms involved in the construction of nuclear reactors in India. The flagship project – the Russian-designed Kudankulam Nuclear Power Plant based in Tamil Nadu, which is comprising of six blocks. The first two units are already operational generating low-cost power for local customers. The third and fourth ones are under construction, with the supply of their critical equipment being underway. Necessary preparations to start works related to units 5 and 6 are also already there. This project represents a unique and solid contribution to the Indian carbon-free energy security, employment and education of Indian specialists in many sophisticated areas. Importantly, there is also a great scope for localization and joint production as well as cooperation in third countries.

Q. Could you please highlight some of the efforts that the government of Russia is currently undertaking to strengthen its ties in regard to cultural diplomacy?

Our mutual historical cultural and civilizational affinity is yet another area of the Russian-Indian traditional engagement. Currently, both sides are committed to the implementation of the bilateral Cultural Exchange Program, which directly helps bring the peoples of the two countries together. We continue the successful practice of holding reciprocal festivals of the Russian culture in India and of the Indian culture in Russia, as well as of Russian film festivals in India and of Indian film festivals in Russia. Russia is invited to be the Partner Country in the 50th International Film Festival to be held in Goa on November 20-28, 2019. At the Summit in Vladivostok, the Leaders agreed that there is a need for geographical expansion of cultural exchanges and greater involvement of the youth and folk art groups and to further promote the Russian language in India and Hindi in Russia comprehensively, including by developing contacts between relevant educational institutions.

The Special and Privileged Strategic Partnership between India and Russia is a testimony of the advanced level of the bilateral relations. It is unique, confiding and mutually beneficial by nature, encompassing all possible areas of cooperation. India-Russia ties have successfully coped with the turbulent realities of the contemporary world. They have never been and will not be susceptible to outside influence. The development of the entire gamut of India-Russia relations is a foreign policy priority for both countries. That explains why our Leaders, who also enjoy strong personal chemistry, meet each other several times per year – for bilateral summits as well as for engagements on the sidelines of major international events such as G20, BRICS, SCO, EAS, etc.