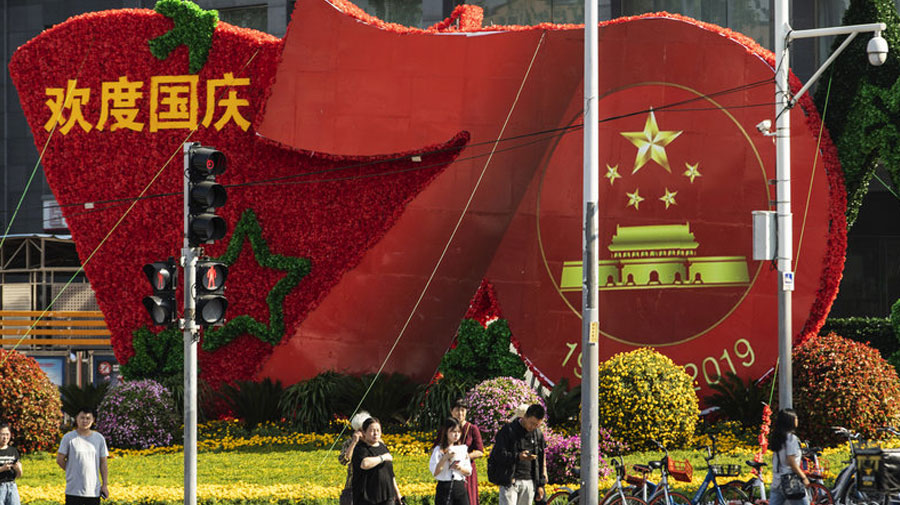 The most populated country in the world, the second largest and the strongest economic power after the US, the biggest feather among the communist states and the vigours performer of the twenty-first century – Peoples’ Republic of China, continues to amaze thinkers and opinion makers around the globe. China is celebrating the 70th year of revolution. October 1, 1949, marked the birth of the second socialist state after the erstwhile USSR. The celebration of joy and collective memory of its past should be looked into as to quench the thirst for knowledge and perspective. Memories of its most celebrated leaders Mao Zedong and Deng Xiaoping both have led the dragon to the pasture they found fit. Leading the mainland into victory through the long march started in 1929 Mao had emerged to be the paramount leader of the new state.

Tiananmen, a very popular and pivotal place in the capital city of Beijing. The world has just witnessed the remembrance of thirty years old protests led by the University students in 1989, commonly known as the Tiananmen Square protests. The protestors demanded transparency, improved economic progress and more freedom, democracy, the protest was suppressed brutally through martial law. Communist China continues to chop the hands that ever questioned its power or legitimacy. Never let anybody know anything- iron curtain- the policy kept ever since Mao’s period.

The lack of adequate transparency in governance and single-party rule have always been the Chinese trait of dealing issues, never let anybody be free of doubt was the concern that it imposed over to the regional commons through all of its stringent policies and offers of economic assistance. So, in essence, you get nothing but what the government wants you to know, the path presently most populist leaders are treading in these times. The powers vested upon the leader of the state is extraordinary, Chairman of the Communist Party of China, Chairman of the Central Military Commission and Chairman of the People’s Republic of China if all these becomes only one that gives him control over everything and makes him the paramount leader. Xi Jinping in all means the supreme leader of China since 2012.

The period of revolution gave the lie to new china with increased concerns requiring immediate priorities. Mao has taken good care and supported China from 1949 to 1976. However, in his last days as the ruler, he was much criticized for much of his decisions and policies. The Great Leap Forward policy upheld by Mao, in fact, took China back and weakened the dragon’s economy’s strength and weakening it further. Decisions to let the university faculties and professors to resign and get back to their paddy fields attracted much criticism and was laughed at. The cultural revolution stage from 1966-76 to have reduced the polarity of Mao and gradually leading to the rise of Deng in the Chinese Communist Party. Chinese growth since Deng’s rose was magnificent and it is his policies from 1976 which has taken China to economic mightiness and military strength. A pathway to development by generating simple hopes among the masses Deng has proved himself to be an able ruler for China at its most crucial stage of progress. It’s nothing but his leadership quality, administrative prudence and sublime faith in the communist party that became a stimulus for the party to stand behind him even after the repeated coup attempts from the third wife of Mao and her Gang of four.

“Let the cat be black or white, it should catch the rat,” amusing yet successfully implemented by Deng Xiaoping to take the mainland to the road of enhanced development and growth. He allowed FDIs, SEZs to function within China to generate its economic power so the dragon can flex its muscles without getting disturbed by the nominal powers it has around it. In 1971 PRC was recognized by the US, accepting China’s ‘One China Policy’. Richard Nixon and Henry Kissinger two prominent policy influencers of their times the head of the state and the secretary of the state respectively. In the cold war political condition, the growth of China supported by American allies and aides helped to create a counter socialist nation-state in the east which, in all its full meaning, was on the way to economic supremacy and in supporting of neo-liberal world order, accepting United Nations Security Council permanent membership.

The prevailing political circumstances of the world was not welcoming the dawn of a new communist state, a time when it is most expected but last encouraged. It was none other than India, under Prime Minister Nehru, to recognise the PRC as a communist state, though being a non-communist state itself.