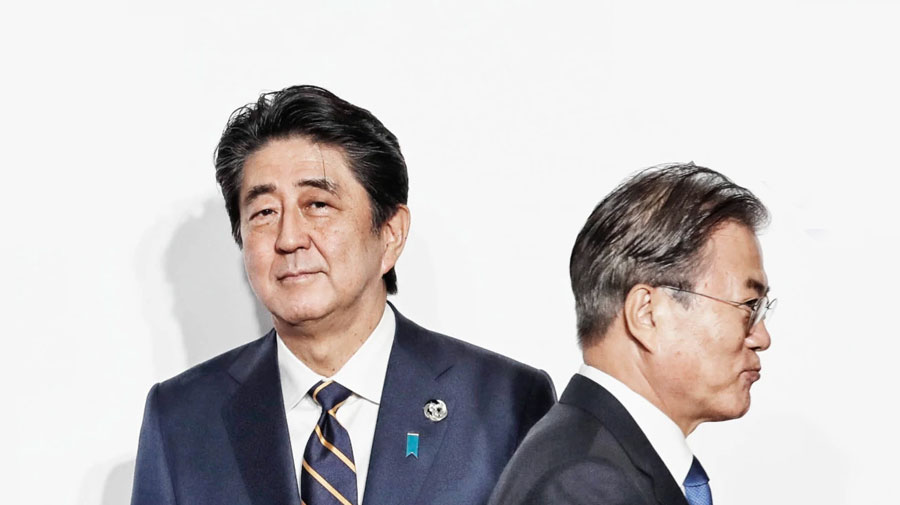 Japan and South Korea have been facing new relationship problems lately. The old problems are not gone. They are just in the standby mode. Asia itself shows that history is an important element to diplomatic relations and it should not be overlooked. Japan, just like other powers, finds it difficult – almost impossible – to recognise its actions during wartime.

One may say that it is time to overcome the differences and get together. The international community has been expecting that from both countries since both are democratic and represent the common values of Western civilization.

Both share the same rivals and the same partners. Both are threatened by the same opponent (North Korea) and both have significant commercial and security relations with the US.

The FIFA World Cup in 2002 was an important event that united – for some days – both countries under the soccer flag. The opening ceremony held in Korea raised hopes around an eventual rapprochement beyond commerce but it did not work out as expected. It indeed created a good image of cooperation and integration, but it was not enough.

Apart from history and Japanese occupations, Japan and Korea have also territorial disputes. Dokdo / Takeshima islands are administered by Seoul but claimed by Tokyo. As other territorial conflicts in East Asia, diplomatic talks seem not to be enough to settle disputes and they can always trigger new disagreements of any nature.

Postwar Japan was convinced that it was necessary to bring Asia together again under the umbrella of trade and development. This is why Japan sought not to settle any issue by military means. In postwar Japan, there was an idea that there could be great powers without military power and Japan could be one of them or the first one of them. Naturally, Japan could not be defenseless. Most of all defense issues would be dealt by the US under a persistent security agreement that is still valid today.

Other Asian nations welcomed postwar Japan’s initiative which was granted by the Japanese Constitution in 1947. From that moment on, as Japan’s economy grew fast, other nations, such as China and South Korea, also benefited from the Japanese official aid for development and trade. After all, Japan was said to become the first economic superpower, having surpassed the US by the end of the 20th century. All those predictions were wrong.

Anyway, the best Japan could do to overcome its past was to promote economic ties among its neighbours. And it did. One can say that Japan became a trustful partner in international trade. Japan’s imports and exports brought Asia together, including China and South Korea. Japan needed Asia and Asia needed Japan in terms of trade as well. Due to globalization effects, it had no turning back. Like it or not, economic integration was a natural and expected path.

What about diplomacy? Japanese diplomacy was said to pursue peaceful values only in a UN-centered way.

At the end of the 20th century, new leaders drove Japan into a different path. Those leaders, bringing some nationalism-oriented discourses, convinced themselves that Japan had, somehow, to treat its neighbours the way they deserved. The current Prime Minister, Shinzo Abe, is one of those leaders.

Along with the strengthening of the Japanese Self-Defense Forces, Japanese foreign policy sought to face old problems like the territorial disputes with China, Korea and Russia, claiming its sovereignty over Dokdo/Takeshima (Korea); Diaoyu/Senkaku (China) and Kuril Islands (Russia). That old Japanese diplomacy no longer exists.

In 2019, Japan and Korea started a new chapter in jeopardizing their commercial relations. As mentioned before, trade has been the strongest link between Seoul and Tokyo since the end of WW2. In August, the Japanese government removed South Korea from a list of trusted trade partners and declared that some strategic exports to South Korea will be carefully verified in order to confirm if they can really be exported since some raw materials could be used to build weapons and war equipment.

Seoul responded to it and declared that Japan is using the trade as a retaliation on the Dokdo/Takeshima case. And also, Seoul declared that it does not intend to renew an intelligence-sharing agreement with Japan (General Security of Military Information Agreement), regarding North Korean activities, which is critical for the security of the region. The Japanese government regrets that Seoul has been taking this issue too seriously into other sectors of bilateral cooperation.

What could be done now? I do not intend to say that they must simply overcome those conflicts and forget about the past. As we watch China rise and North Korea develop its nuclear weapons, Japan, Korea and the US are still trying to solve old and recurrent issues. If they cannot overcome the past, they must learn from it. Provocative acts and retaliations tend to jeopardize long lasting relations. As I mentioned before, some conflicts will not have an end (or peaceful end). The new Japanese policy towards territorial conflicts is largely based on provocative actions, such as the nationalization of the Sekaku islands in 2012, which were already under Japanese sovereignty. Japan declared at that time that the purchase of those islands somehow prevented nationalist discourses and actions by some politicians which could make things even worse. Apart from that, Japan urged the US to confirm that those islands would also be protected under the security agreement in case of aggression by China.

Japan and South Korea have much in common and the integration of East Asia should have both countries as leaders. In international politics, having the same friends and the same enemies should, at least, be enough to start cooperative bonds in order to survive. It does not mean that they must depend on each other. There is much to lose on both sides. That old state rationalism should be revived instead of pride and vanity.