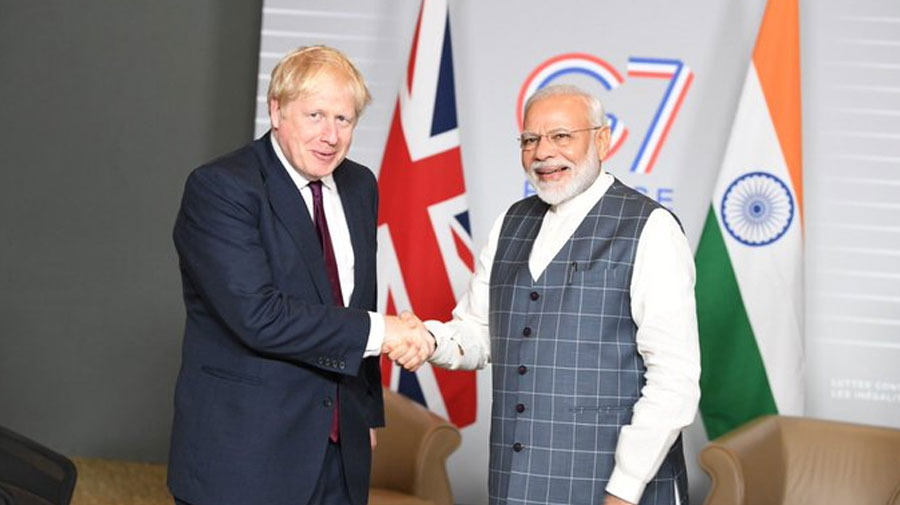 The change of guard in Downing Street has raised expectations that the stagnant India-UK relations might be in for a much-awaited bounce under the new management. Boris Johnson is seen as a more pragmatic leader than his bullish predecessor Theresa May who presided over arguably the worst phase of our bilateral relations. It has made Johnson’s task rather easy because the threshold for improvement is so low that even a slight bump might seem like a massive leap.

So, how realistic are these expectations? Well, the optics couldn’t have been better. Johnson is a self-proclaimed Indophile and never forgets to boast of his “India connection”, calling himself India’s “son-in-law through his estranged wife Marina Wheeler’s Indian ancestry. He’s also perhaps the only one among the current crop of British politicians who is best known in India. None of his contemporaries enjoys the sort of name recognition as he does.

He also has close links with the Indian diaspora, particularly the BJP/Narendra Modi leaning sections, developed when he was the Mayor of London and oversaw the London Olympics. He coopted Indian businesses and individual businessmen through sponsorship deals and donations. Many rich British Indians donated to his leadership campaign. UK-based steel magnate Lakshmi Mittal reportedly joined the “last-minute” rush to fund his election giving him an edge over his rivals. He has also praised Modi and spoken of their personal chemistry hailed as the Indian prime minister a “firecracker”, and a “political phenomenon”.

His appointment of Priti Patel, a Modi supporter, as Home Secretary, and elevation of Alok Sharma and Rishi Sunak to senior positions have gone down well with the Indian diaspora—again particularly with pro-BJP sections. These appointments have been portrayed by Johnson’s aides as a reflection of his pro-India tilt.

So far, so good. As I said the optics couldn’t be better. But trying to look for clues to Johnson’s India policy in his flamboyant rhetoric and Cabinet choices is to ignore the difficult issues that divide the two countries. Indeed, there is a great deal of scepticism whether he has anything like a coherent India policy at all, given his reputation for taking decisions on the hoof whereas rebooting this relationship will need not only a cogent policy but also the political will to implement it.

The biggest stumbling block is Britain’s hardline on immigration. India has been pressing for a preferential visa regime for its citizens on the lines of the one-China enjoys. In return, it is willing to facilitate a “grand” post-Brexit trade deal that Britain is seeking. India is said to be on top of Johnson’s “to do” list once Britain is out the European Union leaving it scrambling for new markets outside Europe. He is desperately looking for a good free trade agreement with India, and in the past, he has offered to address Indian concerns on various issues as part of a comprehensive deal.

Johnson’s two immediate predecessors, David Cameron and Theresa May, talked a good talk. But even as they claimed to value India-UK ties describing them as one the “most important relationships of the 21st century” they failed to walk the talk. Time and again they acted in a manner that directly hurt Indian citizens —like retrospective changes to residency rules for high-skilled immigrants that forced many legally settled Indian migrants to return home. Indian protests were ignored. Indians have also been affected by the frequent tightening of visa rules for students and intra-company transfers. Indian businesses find visa rules a major hindrance to trading with Britain.

The May administration’s response to the Indian demand was a bullish “no”. Far from offering any concessions, it appeared to actively discriminate against India—for example by excluding India from an expanded list of countries from which student visa applicants require “reduced level of documentation”. China is on the list. The move prompted outrage in Indian circles. Lord Bilimoria, a leading businessman and Chancellor of Birmingham University, denounced it as “another kick in the teeth for India”

It doesn’t end here. May’s people also tried to bounce New Delhi into accepting thousands of illegal immigrants who it says are Indian citizens living. A claim India has questioned arguing that many of these people lack identity papers that would prove that they are Indian citizens. It is demanding firm evidence-based on independent background checks. It also fears some of them might pose a threat to national security.

During his UK visit last year to attend the Commonwealth summit, Modi was expected to sign an MoU on the issue but the move was abandoned at the last minute after the home ministry raised national security concerns.

Will Johnson be more responsive to Indian concerns? He used the Brexit referendum campaign to raise expectations promising to open up immigration from India and other Commonwealth countries once free movement of workers from the European Union stopped. But he has now changed his tune and is instead touting an Australian-style points immigration system. It will be a one-size-fits-all system with no exemptions for Indian or other Commonwealth citizens.

Priti Patel is a known hawk on immigration, and she lost no time damping down expectations, and making clear that nobody should expect an easy ride.

Only those with “highest skills” not easily available locally will be allowed to come in —that too “only if they have a job offer from an employer registered with the Home Office and if they can speak English”. Looks like a case of plus ça change, plus c’est la même chose, (the more things change the more they remain the same ), as the French say.

India-UK relations are often good-humouredly likened to those between an amiable old couple muddling through for old time’s sake but lacking any spark. Neither London nor Delhi appears in a hurry to revive a flagging relationship. At the heart of the problem is Britain’s lingering colonial mindset that still informs much of its foreign policy. Former colonies are still mainly looked upon simply as markets to be exploited. This approach ignores the reality that the world has changed and countries like India are now major economic powers in their own right who expect to be treated with respect in accordance with their new status. In other words, as equal partners, not as pushovers.

Britain’s own Parliament pointed this out in a strongly-worded report recently—warning the government that the country risked being left behind in the global race to engage with India if it didn’t change its current approach. The report from the influential Parliamentary Foreign Affairs Committee said: “India’s place in the world is changing fast and the UK government needs to adjust its strategy to fit India’s enhanced influence and power; the UK cannot afford to be complacent or rely on historical ties.”

It will require abandoning successive Tory governments’ wholly market-oriented focus in favour of a policy that would put bilateral relations on a more equal footing.

Is Johnson up to it? The jury is still out on that.

Hasan Suroor
Hasan Suroor is based in London. His new book, Who Killed Liberal Islam, has just been published. A version of this article first appeared in the Business Standard.
Tags:
Commonwealth India BREXIT UK BorisJohnson London Britain BilateralRelations
Share:
Share this...