BRICS: Agenda and Expectation Looking In – Looking Out 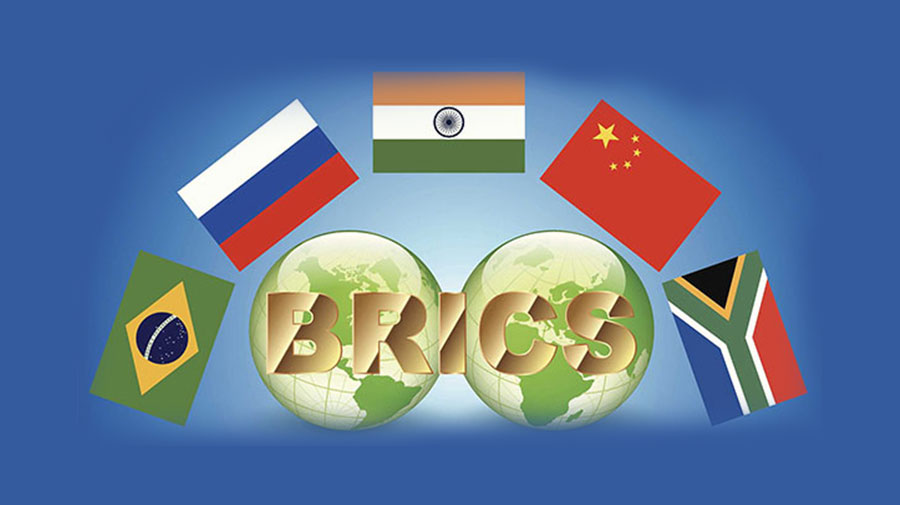 Global order, throughout history, has been dominated by the rich and powerful countries. However, it was a bit of anomaly when BRICS (Brazil, Russia, India, China and South Africa) was established in 2009, as it was for the first time in last 200 years that an institution had been created at the global level without any participation from the Western countries. With two veto power nations and three vibrant democracies, BRICS is a unique experiment to bring politically diverse countries who share a certain degree of convergence on issues like global political and financial governance and development. Of late, BRICS seems to be moving in a strategic direction too as security issues like terrorism and hotspots like Afghanistan, Iran and Syria are also being discussed by the grouping.

The economic rise of BRICS countries particularly that of China and India has made the world take notice of this grouping. As argued by BRICS members, their geo-economic rise is not reflected in geopolitics as global governance is still dominated by the West. Bretton wood institutions, the World Bank and International Monetary Fund (IMF) require reform to reflect the true potential of rising economies. They have become outdated and require an inclusive approach. The reform process has been too slow, reflecting reluctance on the part of developed countries to give equal space to rising economies. Hence, BRICS has established its own bank, New Development Bank (NDB) with initial authorized capital of $100 billion. As per the 2017-2019 operational strategy of NDB, development of sustainable infrastructure is central to its philosophy. BRICS has also established BRICS Contingent Reserve Arrangement (CRA), to respond to any short term balance of payment crisis among the member economies. Unlike the World Bank and IMF, the NDB does not attach strings to financial assistance given by it to needy countries. The bank is not averse to working with other international organizations which shows that it is not trying to rival the likes of the World Bank or IMF but intends to work with them. All it wants is to reshape the norms on which global financial governance is based.

In the political arena, although BRICS supports reform of the United Nations Security Council (UNSC), the internal divisions and rivalries in the grouping make it difficult to achieve this aim. Russia has been reluctant for UNSC reform, although it supports India’s candidature in the reformed council. China has not endorsed India’s candidature for a potential seat in UNSC as Beijing sees India as a rival along with Japan. China has never gone beyond its statement that Beijing supports India’s aspiration to play a greater role at the United Nations. India-China rivalry would persist till the two Asian giants solve their border dispute which can turn into a conflict and the Doklam standoff in 2017 is a very recent example of their strategic mistrust. BRICS, although calls for multi-polarity at the global level but in practice, it is multi-polarity with areas of influence at the regional level where BRICS countries tend to balance against each other. Russia has been trying to safeguard its sphere of influence in post-Soviet space from China’s vigorous push through its Belt and Road Initiative (BRI). India is also feeling the heat in South Asia and the Indian Ocean Region (IOR) where China is making deep inroads to challenge India’s influence. China’s unconditional support to Pakistan is also a cause of concern for India as Beijing uses Pakistan to indirectly confront India and thwart India’s ambitions to rise as a global power.

The divisions in BRICS are further evident on security issues. When India hosted the 8th BRICS summit in 2016, there was a push from New Delhi to bring the issue of terrorism on the table. PM Modi, without naming Pakistan said that mother-ship of terrorism is a country in India’s neighbourhood. China tried to shield Pakistan by saying that political dialogue is required to address the root causes of such problems. Clearly, while India tried to isolate Pakistan from the platform of BRICS, China tried to thwart Indian attempts. Russia tried to take a neutral path as it shares cordial relations with both India and China.

BRICS, with all its economic potential and internal divisions, remains a work in progress. The global order is in flux as Western liberal free-market ideas are now being challenged by sentiments of nationalism and protectionism. US President Donald Trump is the new hero of conservative forces around the world as unilateralism becomes a fashion over multilateralism. He has raised questions over the World Trade Organization (WTO) and walked out of the Paris agreement on climate change. In such uncertain times, a vacuum would develop in the global order where BRICS would become important. New ideas that talk of equality and just global order need a new lease of life. In the new global order, ideas from the South should find a reasonable place and BRICS would serve that purpose. Legitimacy has been a shortcoming of global institutions and by incorporating various alternate voices, there is a chance to make it truly representative and legitimate. Agriculture, food security, energy security, health, climate change, space and digital fields are the areas where BRICS countries would be focusing more in the coming years. Security issues are likely to be on the back burner as there are internal divisions on key strategic issues.