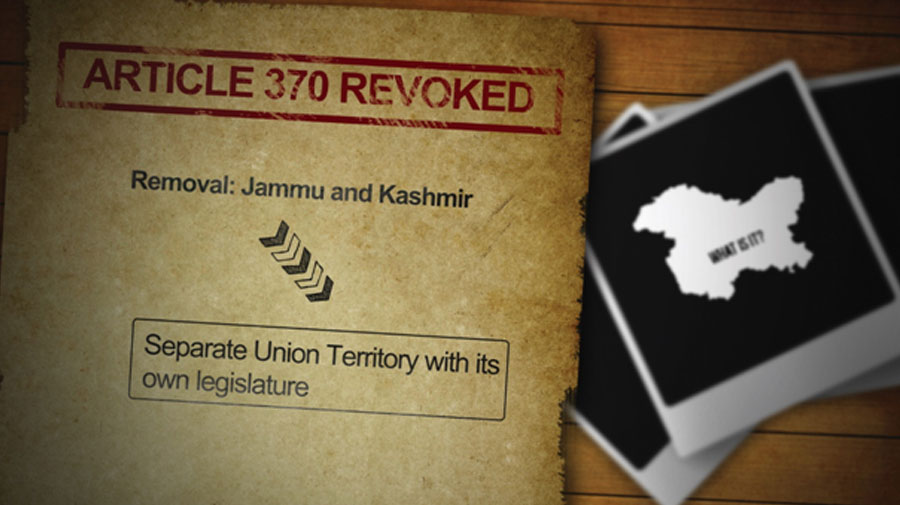 Unusual situations mostly demand unusual actions. This is what happened in case of revoking Art 370 and superseding 35A of Indian constitution with respect to special status and such privileges enjoyed by the erstwhile State of Jammu & Kashmir. The proviso to Art 370 was purposefully inserted keeping in mind India’s original commitment to the people of the valley- we will give you a right to choose your own path and no unilateral decision would be taken. Imposing repeal of Art 370 on the state when its people haven’t been heard and their leaders kept under house arrest is not a wise move and will invariably lead to conflict and strife, which the valley can ill afford.

Further, the State has been divided into two Union Territories as J&K and Ladakh. In fact, these privileges though meant to preserve the kind of then-existing Kashmiri culture of common Kashmiri populace in the State later became a weapon in the hands of the rulers of, now confined in two families with like-minded pseudo leaders of the Kashmiri people, to browbeat the Indian Union to not extend its tentacles of legal powers provided by the Constitution of India in the larger interest of the State as well as the country, which is solely responsible for maintaining unity and integrity of the whole country including that of the J&K. Though Art 370 is a temporary provision as mentioned in the text of this very article, the 370(3) undoubtedly forbids the President of India to not abrogate this article without seeking the express consent of the Constituent Assembly of the State, it obviously precludes any likelihood of such a grave crisis continuing for the past four decades where gruesome violence, horrible terror and uncontrollable mayhem have become the order of the day.

For the given period the State has mostly remained under President’s rule except for few intermittent spells of popularly elected governments which grossly failed each time to honour and perform their constitutional duty and obligations. Consequently, the onus always fell upon the Union government which has no option but to carry over the administration of the State by invoking Art. 356. That always raises a question each time regarding the justification of imposing President’s rule in the State, in terms of gross violation of the Indian Constitution by deliberately encroaching upon the powers of the elected government. Obviously, the issue emerges as to whether the Constitution is a dead-instrument wherein what is written in black and white ought not to be changed at any cost or it is an evolving text meant to apply on living human beings for sake of their welfare and also to remove their difficulties in tune with changing times. This is why an ideal Constitution always evolves with the evolving human societies. Hence the Constitutional provisions cannot foreclose the changing demands of the society to accommodate people’s wishes and aspirations. Similarly in the J&K, the Indian Constitution cannot overlook or ignore the ground realities of persisting macabre violence and butchery of the innocent Kashmiri people for such a long period by Pakistan supported cross-border terror networks with whom these pseudo-leaders of Kashmir maintain close nexus to perpetually serve their mutual vested interests.

If Pakistan’s goal is to destabilise India – as the Pakistani leaders are crying hoarse in their Assembly – with whom it has already lost four wars and the trauma and agony of the defeat always pinches the rulers and military in Islamabad, the so-called Kashmiri leaders simply want to secure their privileges forever for continuing their dynastic rule in the State by misleading the common masses as regards impending threat on their autonomy and privileges by remaining cut off from the mainstream India. Hence these so-called leaders like Abdullahas, Muftis, Hurriyat leaders etc., instead of focussing on common man needs like, education, employment, medical services, economic growth and overall progress and development as all other state leaders in India are doing, themselves provoke the uneducated Kashmiri youth to collude with Pakistan’s instigated terrorism in the State and resort towards separatism so as to create and maintain panic and terror in State and also to serve the global jihad for pan-Islamism aimed at creating global Muslim solidarity for establishing Ummah (a global communion of Muslim faithfuls). In fact, these pseudo-leaders are obviously the very part and parcel of this terror agenda for which they are receive huge amount of money as well just because they have anyhow managed themselves to retain power by being the leaders of the people at large. This is why, they never want the revocation of the Art. 370 and Art. 35A, because that will make them irrelevant vis-a-vis the Union government and mainstream India.

Further, as the ancient history of Kashmir points towards centuries-old cultural similarity with ancient India’s rich cultural traditions of humanism, religious tolerance, and universal moral values when the region had been the abode of Buddhist monasteries and Hindu ascetics. These were intensely protected and preserved by the ancient Hindu Maharajas of Kashmir. Their glorious past and historical contributions with cultural specifics have been well described by an ancient Sanskrit Kashmiri scholar Kalhan, in his classical work Rajtarangani. These specifics are mentioned in the writings of other scholars like Vilhan, Kaiyyat, Mammat, Rudra and many more. Even Islam, when arrived in Kashmir, recognised the unique cultural pluralism or syncretism paving way for communal harmony in Kashmir and also extended its support for this rare distinction to survive. All these were deliberately eroded with the passage of time by these pseudo-leaders who became play-boys in the hands of Pakistani rulers and its ISI, just for sake of their own vested interests.

There is another angle as regards scrapping of the Art 370 to the State and it pertains to geographical contiguity of J&K not only with Pakistan but also with China and Afghanistan. While Pakistan is hell-bent to capture the valley if not the entire J and K on grounds of Muslim brotherhood, China has its vicious imperialist designs over Ladakh after capturing Aksaichin from India in 1962 Sino-Indian war. While Pakistan and its notorious ISI have been fomenting troubles in the state and exporting the cross-border terrorism into state for around four decades  so as to create civil war in the entire country or causing community-based riots to destabilise the country, China is providing its maximum support to Pakistan in its all evil designs against India like providing logistics to terror groups, financial assistance, latest kind of armaments and ammunition, modern weapons and missile technology, submarines, nuclear enrichment technology etc. along with open support to Islamabad against India in opposing terrorists who are to be declared as global terrorists by the United Nations. With the US getting ready to withdraw its forces from Afghanistan, the likely scenario will be more dangerous for the State and India as Afghani Taliban militants with the help of Pakistan’s ISI and the pseudo leaders of Kashmir, who are harping on Instrument of Accession, may create havoc and turmoil therein.

In fact, the Instrument of Accession took place between Sheikh Abdullah and not the Maharaja Hari Singh who, in fact, was the real ruler of the entire Kashmir. While the Maharaja approached the Indian Union, when Pakistan sponsored tribals pushed by Pakistan army had entered into the State creating wide-spread violence, with no preconditions for Kashmir’s accession into the Indian union, he was rebutted by Nehru to give way to Sheikh Abdullah who deliberately put conditions that the said accession is only with respect to defence, foreign affairs and communications.

The net result of the revocation of the Art 370 is clear for all countrymen including Kashmir. Indeed there is no normalcy or security for ordinary people in Kashmir. It is only due Art 356 that the central government has maintained any semblance of sense of law and order and security and that too at the cost of thousands of our brave soldiers of Indian Army, para-military forces as the local police and civil administration have totally failed to perform their duty due to utter politicisation of entire administrative machinery.

Thus, the abolition of the special status will obviously complete the ongoing process of annexation into the India Union as it was a temporary provision and will bring back misguided and stone-pelting Kashmiri youth into the mainstream national politics of democracy with growth and development and also block the road towards separatism. As Nehru said in the Parliament: “Article 370, as the House will remember, is a part of the certain transitional provisional arrangement. It is not a permanent part of the Constitution. It is a part so long as it remains so.” As obvious, it has lost sanctity and the very purpose for which it was formulated because Kashmiriat does not stand for terrorism, separatism or the obsolete “two-nation theory”.

Against this scenario what were the options before the Union government after taking the oath of faithfully discharging the duties conferred by the Indian Constitution to maintain unity and integrity of the entire country. Should the continuing bloodshed be allowed to continue and let innocent persons be allowed to be butchered by the terrorists and Islamic fundamentalists for their no-fault? Shouldn’t India, while taking recourse to various constitutional provisions like 257, 257A, 258A, 356 or removing 370 as a last step, go ahead to restore peace and security in the crisis-ridden state so that constitutional machinery may properly function there and the way towards genuine political participation, economic development and social progress be initiated? With Kashmir becoming normal and safe for the common man in the coming future, the full statehood will be restored as the Union government has declared in the Parliament.

While the developments regarding overturning Art. 370 by superseding the earlier Presidential Order of 1954 has resulted into deletion of the Art. 35A which had protected laws of J&K regarding land, jobs, and scholarships, favouring state subjects and the laws could not be questioned on the ground that they violated fundamental rights of non-state subjects and citizens of India. However, this has been achieved by utilizing art 370 and not repealing it. However, the Art 370 stands fully eroded and the special status has eviscerated.

With no elected and the state governed by the President’s rule, the natural question that arises is whether such a decision is the product of a democratic exercise? Monday’s events set a bad precedent, and her aid a situation where President’s rule may be used to reorganize any state in future.

Neither the Constitution (Application to Jammu and Kashmir) Order, 2019 nor the Reorganisation Bill figured on Monday’s list of business of Rajya Sabha. They were added only after the House was in session.