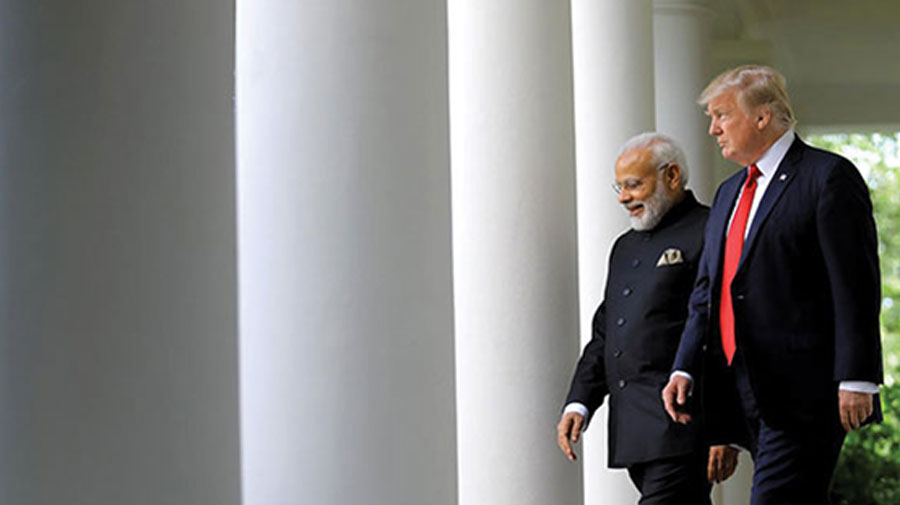 It takes two to tango. In the context of the India-US economic engagement, the growing economic synergies of a resurgent America and an ambitious emerging market as India coupled with the increasing convergence of interests on bilateral, regional and global issues, should have, ideally, spun off a richer duet in the India-US global strategic partnership.

With the issue of data localisation and data privacy becoming the latest flashpoint in the Indo-US relationship, what we have instead are a cacophony of discordant notes shadowing years of gains as the US-India exchange high decibel verbal punches and punitive measures over trade tariffs. The stringent measures by US administration against “unacceptably” high duties by India, including tariffs on steel and aluminium and termination of the Generalized System of Preferences (GSP) programme for India which allows eligible developing countries like India to import to the United States duty free has led to India hitting back with retaliatory tariffs on 28 US products including farm goods such as almonds, walnuts and apples – of which India is a primary consumer.

The conflict looks set to intensify with President Trump dismissing India’s efforts to offer a resolution on significant US requests as “insufficient to assure the US of equitable and reasonable access to Indian markets” While India has slashed the customs duty on imported motorcycles like Harley-Davidson to 50 percent, President Trump persists with India’s high import tariff on the iconic motorcycles as “unacceptable”. The latest issue to snowball into a trade irritant is the concern flagged by technology companies over data localization and the impact on their operational cost of a Reserve Bank of India directive to store the entire data relating to payment systems operated by them in a system only in India for effective monitoring. Any climbdown by India on the provisions of data localisation and data privacy in lieu of US trade benefits would add to the tension.

This conflict comes as an aberration in the steady flow of India-US bilateral relations into a “global strategic partnership” and extensive parleys on convergence in values, priorities, concerns and interests during visits to the US by Prime Minister Narendra Modi in 2016 and 2017. The excellent trade performance between the two countries in 2018 reflected in a jump in US exports to India at nearly 30 per cent to over $33 billion while Indian exports have grown at about 12 percent to over $54 billion, which has ensured a reduction in bilateral trade deficit by over 7 percent in 2018 alone.

For those who track the India-US dynamics, it is not unusual for the US to routinely raise trade issues with allies. Surupa Gupta, Associate Professor of Political Science and International Affairs at University of Mary, Washington, who was at RIS recently, points out that the trade spat is a part of a longer-term, normative battle between India and the United States over global norms on trade. “While the further escalation of the trade conflict is possible, its impact on the overall strategic partnership is likely to remain small,” Gupta points out.

Indian interlocutors would also like to believe that, as in the past, these differences need not obstruct the pursuit of broader strategic cooperation. However, that optimism may be misplaced this time if seen against President Trump’s electoral battle cry of “America First,” as the keynote of his foreign policy. This impetus backed by a return of economic boom in the US puts the US Administration in a position to take economic differences with various trade partners, especially bilateral trade deficit with India, head-on. Propelled by high growth and creation of 2,63,000 jobs in April 2019 alone at a time when other big economies are struggling to create employment, the “America First” drive looks set to play out harder and affect other areas of strategic ties like India’s intent to purchase S-400 missile defence system from Russia, threat of sanctions by the US and price caps in India for medical stents and requirements for dairy imports into India. There are also concerns that this trade spat would spill into India’s relations with other nations with pressure on India’s choice of a technology company for the rollout of 5G in the country.

A CUTS-WDC Policy Note calls out to both countries to look at the bigger picture of their current and emerging relationship and avoid such trade irritants. “The potential implications of this tariff war are likely to go beyond bilateral trade frictions and may have a deleterious impact on the Indo-US ‘economic and strategic partnership’, the paper cautions.

There are two reasons why this unsavoury exchange of trade barbs and hostile acts is ill-timed. At stake are the shared goal of achieving $ 500 bn Indo-US bilateral trade by 2025 which runs the risk of being caught in the bilateral strain between the two powers, tensions between the US and China and developments in Iran, thus impacting business confidence, investments and adding to currency volatility. The GSP accounted for approximately $5 billion of the $83.2 billion in imports India sent to the US and some compromise is urgently needed to offset future damage to this lucrative business.

Second, India has just laid out in the Budget an ambitious roadmap of a $5 trillion economy, involving significant developmental needs and spend in job creation, education, healthcare, infrastructure and climate change as well as substantial assistance and investments from the US and others. The US too, amidst global recessionary trends, can hardly be dismissive of the opportunities in a nearly $2.6 trillion Indian economy with a sustained, well over 7 percent growth, 100 per cent FDI allowed in over 90 per cent of sectors, significant strides in the ease of doing business and a demographic dividend of an increasingly consumerist society. Moreover, India continues to make progress in expanding services trade with an IT services market placed as a world leader contributing to a total services trade of $325 billion in 2018, with a solid $76 billion surplus in this period. India expects greater interest by investors and the US would also do well to recognise this potential.

The good news is that there are several factors that are aligning to promote this occurring, notably the visit of a delegation led by Assistant United States Trade Representative Christopher Wilson as recently as 11-12 July and meetings with Piyush Goyal, Union Minister for Commerce & Industry and Indian officials to provide a new impetus to bilateral trade and commercial ties in line with the mandate given in the G-20 meetings in Osaka by the Indian and US leadership. This is expected to gain traction.

The other upside to all this is that withdrawal of GSP would apparently not make much difference as Indian exports are all geared to take this challenge, according to Mohit Singla, Chairman, Trade Promotion Council of India. “Even the US was benefiting from the GSP regime since the intermediary inputs provided by India helped keep its industry competitive. This withdrawal of GSP is only going to inject the estimated, additional burden of USD 190 million, which is miniscule compared to India overall export to the US,” says Singla. Moreover, withdrawal of GSP benefits is not a doomsday scenario as officials point out countries like Argentina, Liberia and Myanmar which have seen benefits reinstated after making sufficient progress to become eligible for them. What is needed is some extra hard work from India to meet strict compliance norms to be able to get GSP benefits again.

These positives along with the “United States and India: Prosperity Through Partnership” joint statement of June 2017 and the “Commercial Dialogue Joint Statement” of October 2017 are compelling grounds for the two sides to continue to find ways to improve bilateral trade and increase market access in our countries.

Nivedita Mukherjee
Author is a specialist in international affairs (trade and investment), strategic communications and policy advocacy with M.Phil in International Relations from the University of Delhi.
Tags:
EconomicPartnership US India FDI DonaldTrump GSP
Share:
Share this...