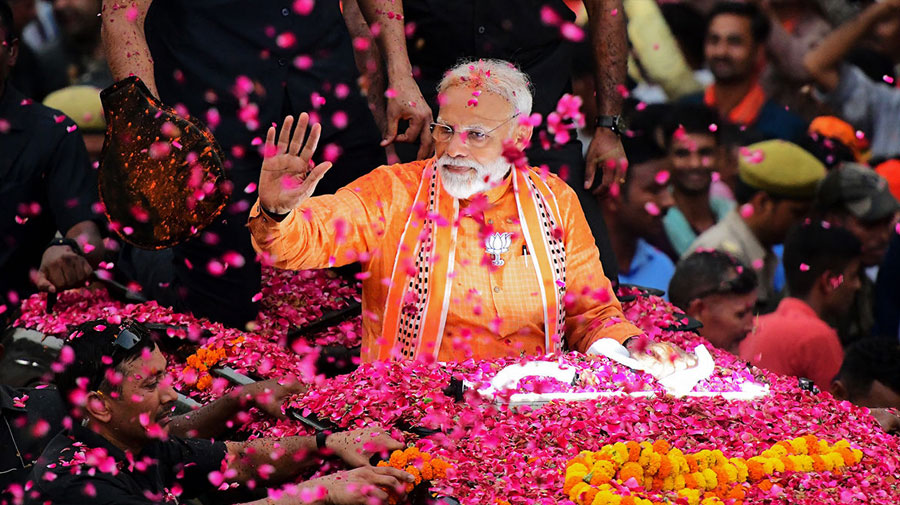 Nobody expected Congress to win the 2019 Lok Sabha elections, but neither did the nation expect BJP and Modi to surpass their own tally of 2014 too!

The elections are a done deal now. We have a clear winner in Modi and his party BJP. Whether or not the country or the opposition, to be precise, anticipated anything of the sort that finally emerged on the horizon is of no consequence now; Success has many fathers but failure is an orphan. The opposition indeed looks like an orphan today. But dare I say, that Modi and his machinery helmed by the magician at work Amit Shah, the thousands of Karyakartas (Cadre), the crafty social engineering, aided, abetted & propagated like a blitzkrieg by various forms of media, all this helped the saffron forces to paint the entire landscape from Jammu to Darjeeling and Kutch to Mangalore in its colours. Rest as they say is history.

If one were to critically analyse some of the standout reasons for Modi’s win in a highly polarized election of the century, one could then deduce what went behind the scenes.

The most notable reason behind such a decisive mandate has been the ability of BJP and its charismatic leader Modi to appropriate muscular nationalism to its sleeves. If Pulwama was the trigger, Balakot was the perfect elixir doctor had ordered. I have never been this surprised. Not that we did not anticipate a Modi win but the scale and enormity of the mandate has certainly pushed our intellectual and analytical prowess to the tiniest corners of irrelevance. Contrary to the conventional wisdom that he would fall somewhat short of the numbers to cobble up a simple majority, he outdid the 2014 outcome and that to me is the ultimate tribute to his versatility and fatal attractiveness to the Indian electorate.

There is the only plausible explanation that holds good here as to what has caused this swing of 6 percent to 7 percent in favour of the BJP and this is that the first-time voters have voted for him overwhelmingly. They typically tend to side with the BJP, but what they have done this time is just matching it up with some of the data that some of us analysts had seen and some of the anecdotal evidence in our conversations on the road with first-time voters. Politics including looking at things like caste, incumbency, the kind of stuff that we have been used to looking at for the last 25 years is dumped into irrelevance for the time being.

When we also examined certain aspects of such an awestruck audience for Modi, it became clear that most of the people all over across the Hindi Heartland, Bundelkhand, Karnataka, West Bengal, Odisha felt that Modi was an extremely hard working Prime minister. He works 18 to 20 hours a day. Mehnati hai (hardworking) that is the kind of phases that you hear for him; Imandaar hai (He is honest) which basically is saying that no matter what charges are levelled against him, he is perceived as honest partly because he is unattached, he is not associated with any family. So, it is hard to pin any sort of corruption charge to someone.

Modi also benefited tremendously from the fallout of a suicide attack in Pulwama in Jammu and Kashmir that killed 40 Indian soldiers in February 2019. Although responsibility for the attack was claimed by a Pakistani terrorist group, it was carried out by a local Kashmiri. One reading of this could have been that Modi’s policies in the Kashmir valley, such as the increase in the use of pellet guns, blinding hundreds and killing at least 14, had led to the attack. But Modi swiftly turned it to his advantage.

Not only did he pursue an aggressive course of action with air-strikes against militants on Pakistani territory, but he also successfully sold it as a huge success, despite some evidence that the fighters had missed their target. The national security narrative took Centre stage in the 2019 election, something that the opposition parties were unable to counter.

The other notable factor was the Opposition & the Congress campaign. Undoubtedly the party’s leader, Rahul Gandhi, has come a long way since his debut in a national election in 2014. But the Congress campaign failed on two fronts. The first was the messaging: it was a mistake to try and attack Modi on allegations of corruption rather than focusing on the economic failures of his first term. Focusing on corruption only served to remind the electorate of the Congress party’s involvement in previous (very large) corruption scandals.

Yet, even had Congress focused solely on the economy, this may not have led to a very different result. The BJP swept the board in the 2017 Uttar Pradesh state elections, held only a few months after Modi’s disastrous demonetization policy which saw the withdrawal of 86 percent of India’s currency. The second failure was the high-handedness with which Congress approached the formation of its own political alliances. The BJP was extremely accommodating of its alliance partners in states such as Bihar and Maharashtra, but Congress did not manage to agree on a deal with its potential partners in Delhi and in Uttar Pradesh.

The third factor was the presidential nature of the campaign. Modi successfully portrayed the campaign as Modi v Rahul. Such a framing benefited Modi – a fantastic campaigner. He built on the national security narrative by framing himself as a Chowkidaar or a watchman, who would protect India. This built on his reputation as someone who would make India great – something that played extremely well in the campaign.

Modi’s profile in India is huge. He takes personal credit for all initiatives, and his picture appears multiple times in the same editions of the daily newspapers when government initiatives are flagged. The BJP has had an extraordinary control of the political narrative during this election, aided by its extremely large war chest which has helped it penetrate even deeper into traditional and social media. While only a quarter of Indians use WhatsApp, still 300m people, the creation of promotional material specifically targeted at different segments of society has played a huge role in advancing a particular political narrative.

In addition, the Election Commission has been criticised for clearing BJP leaders of many alleged election code violations, and only belatedly banning the showing of a biopic about Modi on the eve of the elections. It also allowed the BJP’s TV channel, NaMo TV, to run without challenge throughout the campaign. It has now gone off the air.

The last nail in opposition’s coffin was the exceedingly negative & vicious polarizing campaign by BJP. In 2014, 51 percent of those who responded to India’s national election studies said they believed that democracy meant that the will of the majority community should prevail; a steep rise from 2009. This demonstrates a move towards the right and an acceptance of Hindu majoritarianism in Indian politics; a position that questions whether religious minorities, particularly Muslims, should have special rights within India. This trend of Hindu majoritarianism is higher among the young – a growing demographic within India, who have grown up in an era in which the BJP has been a national player.