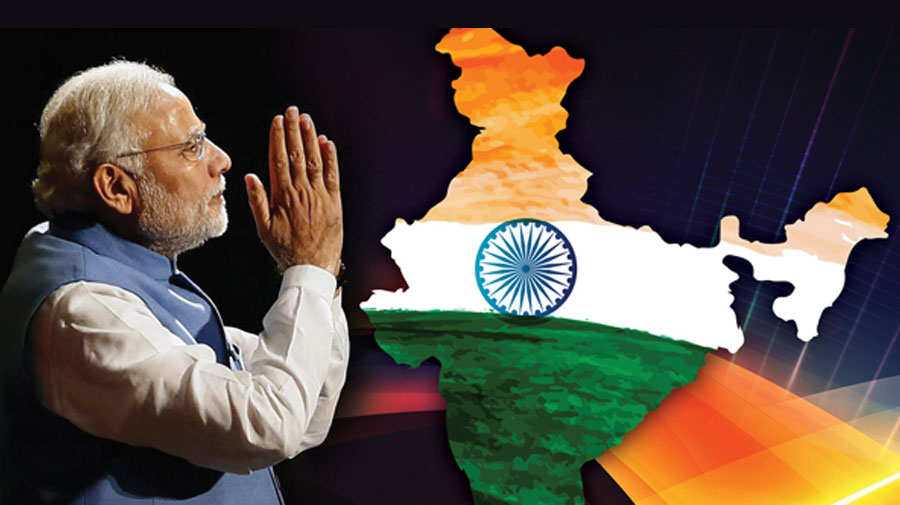 Posterity may well look upon the 2019 Lok Sabha polls as one which set in motion the transformation of India into Bharat, in right earnest. Though the so called Nehruvian consensus represented by the three pillars of secularism, socialism and non-alignment had long been under siege over the last three decades, the dynastic and effete Congress had somehow managed to keep alive the notion, howsoever tenuous, that it was still the default party of governance. Power may occasionally slip out of hand, but the eventual comeback of the Grand Old Party, heading a coalition or otherwise, was only a matter of time. It is this hypothesis which Narendra Modi’s re-election has smashed to smithereens. Permanently.

Emphatic as it was the 2014 victory of the Bhartiya Janata Party (BJP) was widely ascribed to anti-incumbency as much as the Modi wave. It was not an independent phenomenon. Establishing its credibility as a precursor to the onset of “acche din” (good days) was thus imperative for the new regime. Which is why the government’s focus in the last five years was confined to ushering seminal economic reforms like the Goods and Services Tax (GST), the Insolvency and Bankruptcy Code, and other policy initiatives primarily aimed at attacking systemic corruption at the core.

The crusade against graft topped the agenda, and rightly. The demonetisation shocker firmly drove home the message despite widespread criticism from economists and the commentariat. By Modi’s own volition it was done in the national interest. It let loose pent up anger against anti-nationals and other internal enemies since curbing terror financing with fake currency along the border was among the main objectives. The political impact was immediate: the BJP swept to power in Uttar Pradesh in 2017 with a huge majority. The masses were convinced that the corrupt rich had been taken to the cleaners, and that they did not mind the temporary sufferance and disruption caused by the move.

Radical political changes which have long been at the heart of the BJP’s ideology were allowed to fester on the back-burner to avoid ruffling too many feathers at once. Long overdue commitments like ending the special Constitutional status accorded to Jammu & Kashmir, construction of the Ram temple at Ayodhya, and piloting a Uniform Civil Code will now have to be brought centre-stage. The success of Modi 2.0 in the coming months will largely depend on the sincerity with which pledges made in the manifesto are pursued. Only this time there will be no excuses to hand out given the resounding nature of the people’s mandate.

Wiseacres and carping critics counter “but it is the economy, stupid,” little realising that facing its challenges is a 24/7 job, especially in times of volatile markets and the gathering clouds of global recession. The electoral impact of an economic downturn or upswing is never certain. Which is why the Congress’ desperate effort to make farmer distress and record high unemployment the centrepiece of its campaign did not work. In fact, there has scarcely been an election in which price rise and joblessness have not been issues. But no government has been voted in or out purely on the strength of economic indices. Rising GDP does not necessarily rope in votes or a falling rupee impact the ballot box. It is the larger message of hope that counts.

Ideally the morphing of India into Bharat should have begun immediately after the British left in 1947 having partitioned the country along religious lines. In retrospect Gandhi’s blunder in appointing the very British at heart, Jawaharlal Nehru, as the first Prime Minister despite the Congress’ unanimous preference for Sardar Vallabhai Patel set the country back by decades. Nehru by his own volition was a reluctant Hindu with a visceral disdain for the “RSS mentality”. His obsession with western ideas like socialism and secularism moulded the minds of the urban educated classes over generations. They grew up loathing their own religious icons and cultural traditions.

Fundamentally, the Modi encore showcases the electoral validation for a course correction. Revision of history books incorporating the changed perceptions cannot brook further delay. Reorienting education holds the key to a Bhartiya renaissance based on the universal values of sanatan dharm. Mindsets need to change. This can only be gradual since large swathes of the voting populace still remain wedded to a counterfeit concept of secularism preferred by Nehru and his intellectually challenged bloodline successors.

Donning the clothes of Bharat at a purely political level marks the definite end to decades of vote bank politics. Voting trends of the latest national poll have only reconfirmed that Muslims no longer vote enbloc for any party in particular, least of all the Congress. So the old chestnut that the BJP has to be kept out of power to ensure the safety of Muslims and the underprivileged (Dalits) does not find resonance anymore. Seeds of the fear were willy nilly sown by Nehru in the 1950s to ensure that neither deserted the Congress.

More importantly, in the modernised worldview of the Rashtriya Swayam Sevak Sangh or RSS (the BJP’s godfather), Hindu nationalism does not in any way conflict with the centuries old tradition of tolerance and pluralism as the Nehruvians would have us believe. Unlike Abrahamic religions like Christianity or Islam, Hinduism is not anchored in the God willed certitudes and theological pronouncements of a single prophet or holy book. In fact, it was never a religion in the truest sense. For even an atheist can be Hindu. Seeking, the search for truth, lies at the core of its spiritual heritage and cultural traditions. Fanning doubts on the country’s future as a secular republic is a lost cause. Bharat can never be a theocracy.

To sum up Modi 2.0 was a ringing endorsement for a strong leader of sterling integrity who rose from humble beginnings. Someone unapologetic about his Hindu heritage; someone ready to rise to the occasion when dealing with enemies, external or internal. Implicit in the electoral landslide was the maturing of the Indian voter who can be relied upon not to confuse the national interest with bread and butter issues.

The shrill campaign run by the Congress to vilify Modi with the help of a misguided western media out of sync with national realities proved hugely counter productive. The once Grand Old Party stood reduced to a fringe player, with little or no chance of a revival in the near future.

The road ahead may have its share of thorns, but for once it is the right road; a road which remained untraversed since Independence.

Sudhir K Singh
Author is a senior journalist who has worked for the Times of India, Asian Age, Pioneer and Statesman in responsible positions. He can be contacted at sudhirksingh@icloud.com
Tags:
BJP Election2019 RSS LokSabha India NarendraModi
Share:
Share this...