India-South Korea Relations and Situation on the Korean Peninsula 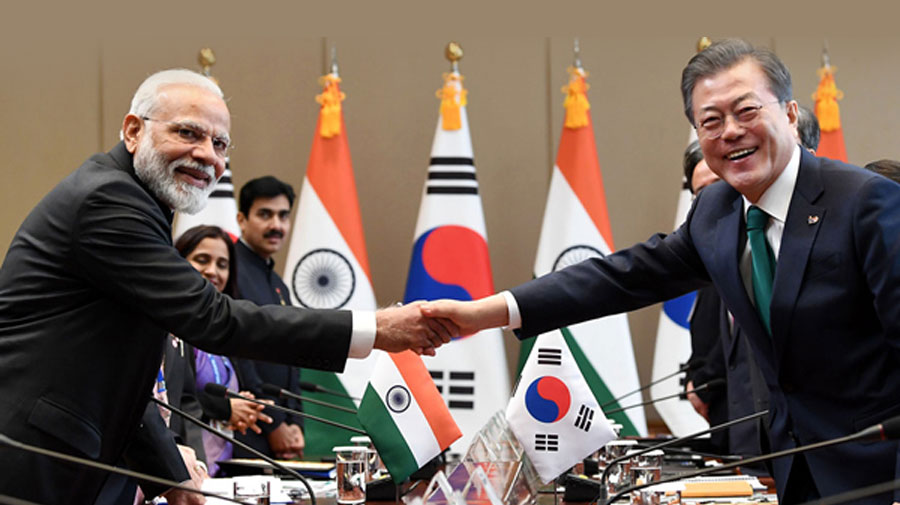 India and South Korea have emerged as natural partners to each other after the end of the Cold War. In subsequent years, economic, political and strategic relations of both countries have improved substantially. Both countries enjoy their close proximity with the US as well as share anxieties about the nuclear-missile technology exchanges between North Korea and Pakistan. Moreover, India and South Korea have had exceptional convergence of their visions about the region.  Both are concerned about the rise of an ‘assertive China’ but rather than overtly containing China, both would like to engage China in moderating its behaviour. Both countries want an open multipolar Asia in which interstate relations are institutionalized and cooperative security and prosperity are ensured for every country. Actually, on most of the political and security issues of the region, India and South Korea have similar stands and thus there has been a huge potential for cooperation between the two countries.

The current phase of the bilateral relations between India and South Korea began with India adopting its Look East Policy and starting liberalizing its economy in the early 1990s. South Korea, which has followed an export-led growth model, was looking for new destinations of its exports and South Korean businesses showed significant interests in a liberalized Indian market and resources. Thus, the first phase of the contemporary India-South Korea relations was largely dominated by economic cooperation between the two countries. India and South Korea, after exceptional growth in their bilateral economic relations, signed the Comprehensive Economic Partnership Agreement (CEPA) in 2009 and their bilateral trade increased massively from less than USD1 billion in 1990 to more than USD20 billion in 2012.

India and South Korea also gradually started articulating their common security and strategic concerns and signed the Strategic Partnership Agreement in 2010. There have been frequent high-level visits between India and South Korea and both countries have had several defence and defence production related MoUs in the last few years. Moreover, both the countries have forged a vibrant partnership in various other fields such as education, cultural and people-to-people exchanges.

Thus, India and South Korea have undoubtedly deepened their relations in the last three decades and it could be evaluated positively. However, it could also be added that by looking from the vantage point of a huge convergence between the two countries, their performance has been less than satisfactory. It’s important to note that both the countries have no negative historical baggage and their economic complementaries are exceptional.

The bilateral trade between India and South Korea has gone down after 2012 and it has only recovered to USD20 billion mark in 2017. The CEPA has not been very helpful in improving bilateral trade between the two countries and rather it is being blamed for the trade contraction. India has been too sensitive about its trade deficit which at the time reached almost USD10 billion and complain that South Korean manufacturing companies avoid joint ventures with Indian companies. Similarly, South Korea has been unhappy at the way a proposed investment of USD12 billion by POSCO in Odisha was caught into political and administrative controversies for more than a decade. India and South Korea announced to revise the CEPA in 2015 when the Indian Prime Minister Narendra Modi visited South Korea but the process has not yet been completed. Even, in the political and strategic domains, it could be said that even though both countries have enhanced their Strategic Partnership to Special Strategic Partnership, the strategic content in it has been very thin. Apart from joint statements and mutual visits of both the countries in foreign and defence areas, there have not been any specific bilateral goals identified. Actually, India has been dissatisfied that South Korea does not take an open stand on India’s claim for a permanent seat in the United Nations Security Council and the Indo-Pacific strategy. Similarly, South Korea feels that India should have a more open stance on its territorial and historical disputes with Japan.

In recent years, both countries have made a concrete effort to re-energize their relationship and try to confront these issues. India through its Act East Policy and South Korea through its New Southern Policy have been looking to move closer to each other in all possible domains and provide more content to their relationship. It is important to underline that both countries have emphasized people to people and cultural exchanges as the bedrock of their relationship, which would shape their approach towards each other in economic, political and strategic domains. Through the visits of the South Korean President Moon Jae-in July 2018, the first lady of South Korea in November 2018 and the Indian Prime Minister Narendra Modi in April 2019, both the countries have been trying to bridge any perception gaps between the two countries and work together on issues of bilateral and regional concerns.

The situation on the Korean Peninsula

India has been invited to play a constructive role on the Korean peninsula by South Korea and the joint statements between the leaders of both the countries in 2014, 2015 and 2018 mention it very clearly. More specifically, South Korea would like India to play an important role in the resolutions of the North Korean nuclear issue. India is one of the few countries which has sustained diplomatic relations with North Korea for decades and it has taken principled neutrality in the inter-Korean relations from the very inception of the two Koreas on the Korean peninsula. Indian goodwill capital might be useful in constructive intervention in the intricate denuclearization issue of North Korea. Actually, unlike previous Park Geun-hye administration of South Korea, Moon Jae-in administration wants to denuclearize North Korea through dialogue and diplomacy. Moon Jae-in is also interested in improving inter-Korean relations through his engagement policy. Incidentally, India’s approach towards North Korea has also been the same. India has constantly opposed North Korea’s nuclear and missile tests and adhered to the resolutions passed by the United Nations Security Council. However, India prefers diplomatic solutions for the problem by addressing the threat perception of both parties. South Korea’s present ruling dispensation has a similar policy orientation and there are realistic possibilities of cooperation between India and South Korea on the issue. However, it must also be realized that any support and cooperation from India to resolve the nuclear issues of the Korean peninsula must be a low-key affair as an overt involvement of India might enrage China, which considers the Korean peninsula as its own influence zone, and rather than resolving the problem, India’s overt activeness might further complicate the issue.

India and South Korea are also on the same page in arguing that along with the denuclearization of North Korea, the inter-Korean relations must also move forward to forge bilateral exchanges in all possible areas. The reunification of Korea is indeed an important goal but it must be pursued in an incremental and phased manner and it must not be threatening to both the regimes of the Korean peninsula. India has promised South Korea during recent high-level political exchanges in recent years that it is willing to use its good offices to facilitate such possibilities. India and South Korea also share the understanding that coordinated and cooperative roles of regional powers of the Northeast Asia, along with the US, are prerequisites to establishing peace, stability and prosperity on the Korean peninsula and it must be articulated sincerely.