Diplomatist > Regions > World > India and the US post G20 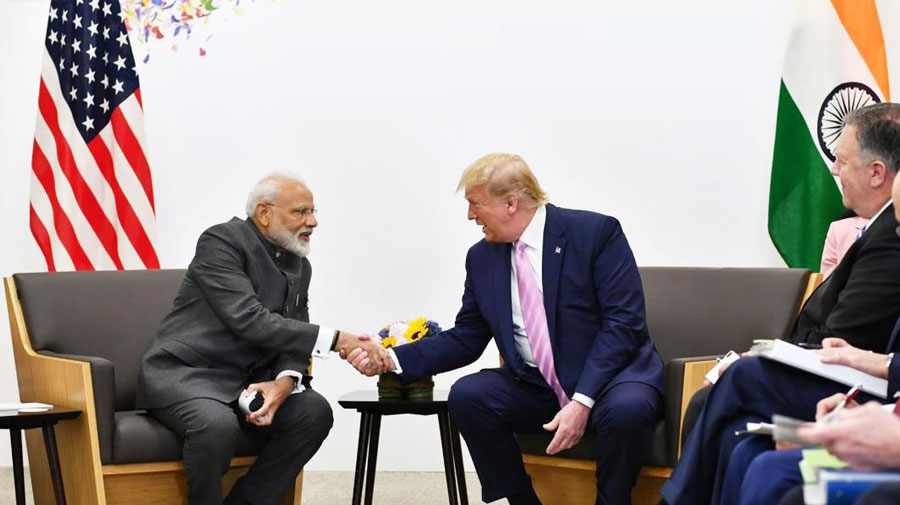 While India is routinely described as a “strategic partner” of the United States of America, and is moving slowly but surely towards the status of receiving NATO-like treatment without being a member in the USA Congress, frictions had mounted between the Trump administration and Narendra Modi’s government over a wide range of issues in recent weeks; growing differences between Washington and New Delhi were clearly threatening to undermine what had been a deepening strategic relationship.

From India’s protectionist trade policies to Prime Minister Modi’s need to purchase the S-400 air defence system from Moscow and purchase oil from Iran, tensions between Washington and New Delhi had grown significantly over the past few months.

India’s conversations with the USA at the highest level at G- 20 were preceded by an important visit to New Delhi by USA Secretary of State, Pompeo. They were also preceded by President Trump’s tweeted warning to India that it must lower tariffs for USA exports.  The USA had already made it very clear that India’s purchase of Russian S-400 missiles was unacceptable and India should look for alternative sources, and India had made it equally clear that its national interest required the Russian deal to go ahead.  Similarly, the question of India’s energy security required India to depend on Iran for oil; moreover, USA policies on Iran could have extremely serious adverse consequence for peace and stability. But the USA drew a red line on Iran also (along with Venezuela) as a source of oil for India’s needs.

Both sides had left little space for compromise by the time the two leaders met in Osaka.

Yet the atmospherics of the discussion that took place were characterized by a certain restraint, moderation and commitment to find mutually acceptable solutions. India and the USA could take some satisfaction at the bonhomie the two leaders exuded, and the postponement of decisions on trade to a future meeting of the two Trade Ministers.  India could take genuine satisfaction from the fact that despite the firm and explicit airing of differences on key issues in public by the two leaders, the atmosphere of cordiality and commitment to a longer term view of their strategic ties had not been dented.

Unfortunately, the same cannot be said about the two main adversaries, USA and Iran. The latter has publicly declared its determination to violate the understanding on restrictions on its enrichment of uranium, and the USA response has been on expected lines. The risk of conflict due to a misunderstanding or over reaction is high. So is the danger of serious adverse consequences for countries like India. In that event, India will find it difficult to continue with its tight rope balancing act. Which is why several experts including Vikram Mehta of Brookings have been urging that India should work quietly with other countries in a similar situation, such as China, Turkey, South Korea, Japan, France and Spain to find a diplomatic solution while there is still time.

There has been (somewhat unwarranted) excitement in India at the news that the USA Congress is moving slowly but surely towards the status of giving India NATO-like treatment in terms of access to sensitive arms and technologies without India being a member of the NATO. This  is simply the delayed formalisation of the designation of India as a “Major Defence Partner” during the Presidency of Barack Obama in 2016. The USA has already given India Strategic Trade Authorization-1 status, a move that facilitates the exchange of high technology and strengthens defence collaboration, and also designated India as a “Major defence Partner.”  Former Ambassador T P Sreenivasan suggests that  “…the motivation of the Senators and Congressmen in pushing for the new status of India is clear enough. The China haters among them believe that India should be built up as a counter to China and wish to sell more American weapons to India. The anti-Russian lobby naturally want to end Indian dependence on Russian supplies, which cannot be wished away, as External Affairs Minister S. Jaishankar told Secretary of State Mike Pompei in New Delhi.”