G20 SUMMIT: Photo-ops or real hope for the future? 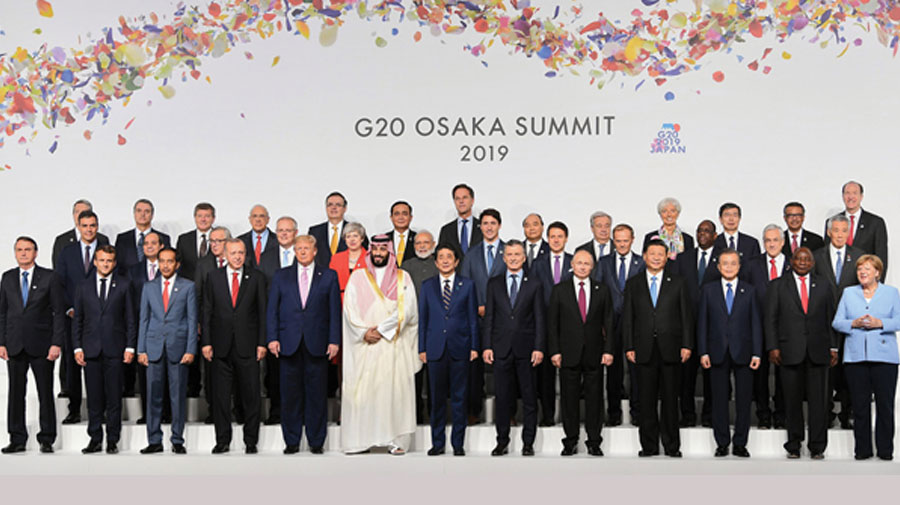 The recently concluded (June 28-29) G20 Summit at Osaka has been a subject of considerable discussion within the diplomatic and think tank community. For some, it was a lot of theatre and photo-ops with some serious business. For others, there was a conspicuous mismatch between the smiles and handshakes of leaders before the cameras and the obviously unresolved tensions between them on a number of issues including trade and cyber security.

However, it would be fair to say that the Summit was a success in terms of defusing tensions and issuing guidelines for a sustainable future. After all, the world was on tenterhooks on the eve of the Summit, with war clouds gathering over Iran, an all-out Trade War between the USA and China brewing relentlessly, tensions because of USA sanctions against Russia and their implications for countries like India and Turkey, the Middle East in disarray, strains between the USA and its closest allies, and much uncertainty about where the global economy was going.

In the event, the Osaka summit came out with a comprehensive and balanced declaration covering a wide range of issues, encompassing the environment and climate change, women’s empowerment, health, reducing inequalities, energy, development, trade and investment. It undoubtedly offers renewed hope for the recovery of global growth and lowering of tensions on key differences between the USA and the rest of the world…perhaps largely because Trump-the presidential candidate is taking over from Trump the business-politician. Thanks to the restraint and comparative moderation shown by him in one meeting after another (reciprocated by all his interlocutors), differences were very much on display without confrontational rhetoric, and temperatures not only came down, but negotiated solutions seemed achievable—no mean feat on an issue such as USA-China trade or USA-India tensions on the latter’s defence contracts with Russia.

As is not unusual, the meetings on the sidelines, especially between President Trump and other world leaders, the trilateral and multilateral between Russia-China-India, USA-India-Japan, BRICS, etc tried to assert their relevance – with varying success, but contributing to the usefulness of G 20 as an invaluable networking opportunity for world leaders. After all, the G 20 represents two-thirds of the world population, 80 percent of world trade and 85 percent of global GDP between its 20 members from the developing to the developed world.

A few questions, however, continue to nag G20 observers, moderating the sense of optimism for the future of the world. The consensual bonhomie is difficult to sustain post-Summit, given that guidelines are non-enforceable and none of the big problems has been resolved even while commitment to further dialogue has been expressed and patience in expecting progress promised. Moreover, a caring world is difficult to envisage when the mighty and powerful insist on being ultra-nationalistic. Finally, solutions to many of the world’s problems seem beyond the capacity of governments to resolve—for example, climate change. Unless there are viable partnerships between government and civil society (including business, the media, women and youth) G 20 declarations will be remembered as pious statements of intent.

In 2022, it will be India’s turn to host the G 20. India will have to draw upon its cultural and civilizational assets, to address the crying global need to change mindsets and lifestyles, in addition to the usual tradition of papering over differences and ensuring a “positive” outcome in terms of declarations, if a better world is to emerge in the years ahead.