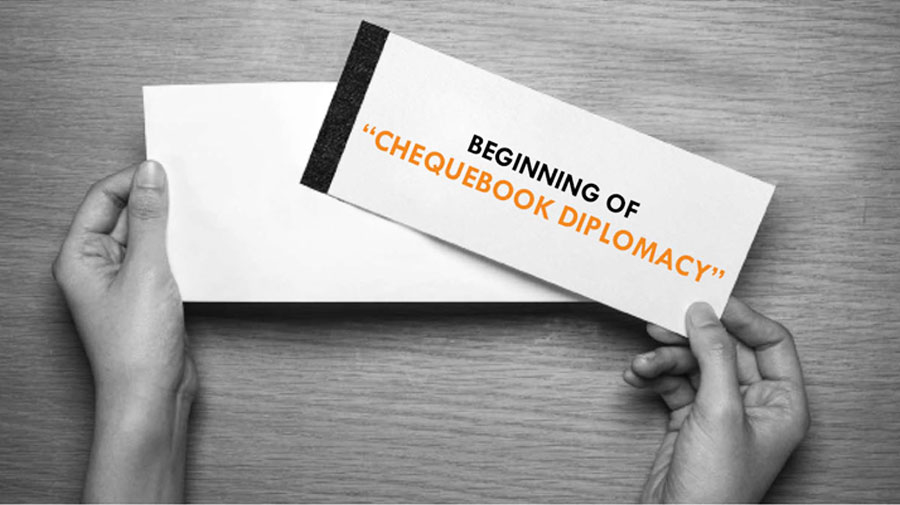 India’s modest foreign assistance has been response-oriented and need-based, in the form of training and equipment for small scale industries and provision of experts, except in some neighbouring countries, which received development assistance. But several developed countries and China have been engaged in “chequebook diplomacy” in order to gain political influence. The budget proposals this year seem to indicate that India has increased assistance to some neighbouring countries and African nations to increase our engagement with them. The MEA Budget of Rs. 17,800 crores shows an increase of Rs.2800 crores which is mostly in an increase in foreign assistance.

The budgetary allocation has been increased successively over two years, showing that following the 2017 Doklam crisis, India is according high priority to it for fear that China might try to drive a wedge between India and Bhutan by making friendly gestures to the Himalayan country. It will be an indication to China that India will make the necessary investments to meet the requirements of Bhutan in the years to come. It is suspected that China selected the India-Bhutan-China trijunction to build the road to cast aspersions on India’s obligation to defend Bhutan. China might have hinted to Bhutan that, like the rest of the China-Bhutan boundary, this area could be demarcated if India was kept out of the picture.

Both Nepal and Mauritius have maintained a high priority in the allocation and have received ₹1,050 crore and ₹1,100 crore respectively. In terms of regional allocation, Latin America received the lowest of the MEA’s expenditure allocation with a meagre ₹15 crore. Afghanistan’s allocation has also come down from ₹470 crore to ₹400 crore.

Surprisingly, only Rs.45 crore has been allocated for India’s building activities in the port of Chabahar in Iran. This is a reduction from the previous year’s allocation of ₹150 crore. India is at the forefront of the construction of Chabahar port which is a major regional initiative from India. India’s works at the port received a waiver from the anti-Iran sanctions of the U.S.

In other words, the increase in the MEA budget does not mean an increase in the funding of our missions. Our missions are generally poorly maintained and our allowances are not comparable even to some of the other developing countries. The Representational Grant is particularly low and the officers have to stretch it out to return the generous hospitality they receive from other missions.

The inclusion of assistance to foreign countries in the budget of the Ministry of External Affairs creates the false impression that the Ministry gets higher and higher allocations each year. Though external assistance is an instrument of foreign policy, it seems unfair to mix it with the operational budget of the Ministry. At a time when Indian diplomacy has to be particularly active, the increased allocation is illusory as the disbursement of assistance is automatic. The missions have no discretion to hold back the payment or to speed up disbursement as an incentive to better performance.

In the case of our neighbours, the strategy seems to be to pay them to ensure loyalty and dependability, a game that the Chinese play with finesse. But there is a considerable risk here because leadership changes in these countries can lead to changes in policy, making our investments unproductive. More careful planning and innovation are needed to devise means by which we are able to have more permanent benefits. More discretionary grants and entertainment should be provided for diplomats for this purpose.

The Finance Minister mentioned the opening of new missions in countries where we do not have representation. This again has to be done with utmost care as once a mission is established, it will be difficult to withdraw it. It is possible to operate through non-resident missions in many countries in faraway places. The existing situation and possible workload should be carefully assessed before missions are established.

The budget of the Ministry of External Affairs is a clear indication of its priorities. But the inclusion of foreign assistance in the MEA budget may convey the wrong message about its activities.

Even countries, which engage in “chequebook diplomacy”, deny that they are dishing out money to curry favour. In a Xinhua commentary in 2017 China stated: “But unlike traditional aid from the West, China seldom gives budgetary support or other forms of monetary donations to foreign governments. Suitcases bulging with cash are not the Chinese way. China prefers to see itself as a country that “teaches men to fish” rather than one which simply dishes up plates of fish and chips.” India’s new strategy to increase its foreign assistance is likely to be criticised as the beginning of “chequebook” diplomacy.