10 Measures to vitalize Nepal-India Relationship with the New Modi 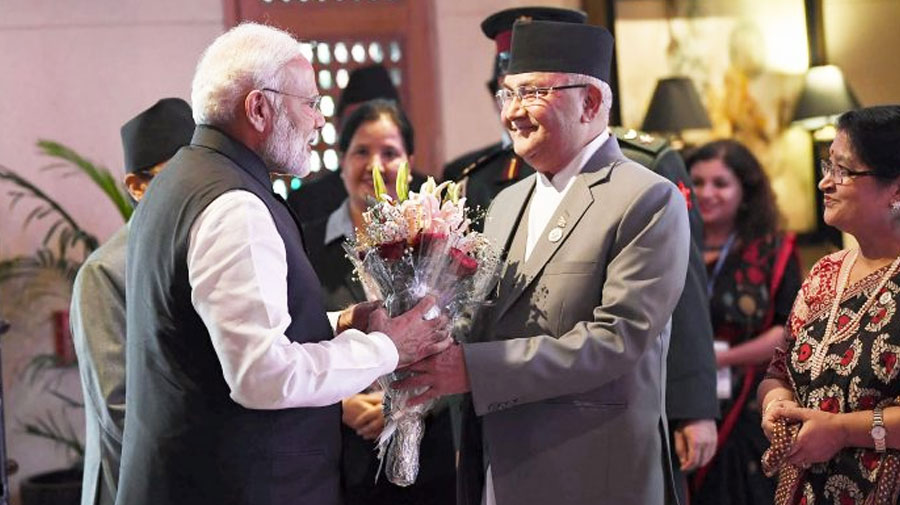 After 17 years PM Modi visited Nepal 4 times as the Head of Government (HOG), which communicates India’s pledge and sincerity for enhancing the respectable and cordial relationship with Nepal. Modi visited all the nations in the neighbourhood except Maldives during his first tenure. Present in the first swearing-in ceremony of Modi in 2014 were the HOG of South Asian Association for Regional Cooperation (SAARC) nations in the immediate neighbourhood while the second tenure beholds Bay of Bengal Initiative for Multi-Sectoral Technical and Economic Cooperation (BIMSTEC) HOGs, Chair of Shanghai Cooperation Organization (SCO) President of Kyrgyz Republic representing Central Asia and PM of Mauritius of the Indian Ocean Region. The re-imagining of neighbourhood initiates Delhi to associate with various nations, sub-regions and regions. PM Oli of Nepal has given an impression of being enthusiastic and prompt to be part of the swearing-in function to be held in Delhi; at the same time, the Nepal Communist Party came into power with anti-India rhetoric. Nepal’s five HOG but four PM including Oli visited India during Modi’s first tenure. The first visit of PM Modi in Nepal was acknowledged with eagerness and optimism while the fourth one was accepted with dissimilar speculation. Discussion in Kathmandu is predicting to focus on the prospect of Nepal-India relationship, India’s “First Neighbourhood Policy” and the Nepal Communist Party’s (NCP) endeavour at accomplishing a geopolitical balance, with the increase of major power manoeuvres in the region and Nepal. Academia, politicians and diplomats in Kathmandu have been discussing in various platforms and in social media on what would Narendra Modi mean to Nepal?

The international situation with China and the US’s trade war is ongoing and Trump terminating India’s designation as a beneficiary developing nation under GSP from 5th June. Globalization and multilateral treaties and conventions are less significant.

The diplomacy in Modi first tenure was wide-ranging from “First Neighbourhood Policy” to engagement from almost all the continents. With that determination, Modi will spend more time with the immediate and extended neighbourhood. India is deeply drawn into “Act East Policy” which expresses the importance of BIMSTEC, while SAARC will be on hold till Pakistan expresses seriousness in countering terrorism. At the same time, India will be engaging Pakistan through the Shanghai Cooperation Organization (SCO). The critical platform to securing interests can be distinctly envisaged as BIMSTEC to be the apparatus to the “Act East Policy” while SCO to West and Central Asian Nations and the Indian Ocean Region as part of the Indo-Pacific conception. BRI may not be objectionable other than China-Pakistan Economic Corridor) CPEC, on the contrary, can be made use of for India’s key strategic interests by means of regional connectivity. India’s “Strategic Balancing Policy” will be at hand focusing more on the immediate and extended neighbourhood with reworked “First Neighbourhood Policy” with major powers expanded interest in the backyard.

India’s disinclination to uphold the 2015 constitution of Nepal was the initiating point, where owned impression turned around that led to the imposition of a blockade by India when Oli was the HOG. The imposition impacted the daily lives of the general people severely. Anti India oratory took at large in Nepal especially by the then United Marxist Leninist (UML) and NCP Maoists who unified to participate in the federal and provincial election attaining majority and representing two thirds with the support from the Madhesh Based Parties to govern for a full term after 20 years.

An alternative strategic network was expedited after the unofficial blockade by India when China’s intention to move into South Asia and gain a foothold while India’s lack of trust in Nepal’s policies and the political leaders and their footprints, as well as the course of action in Nepal surely, has a geopolitical and geo-economic significance. The Oli government looked to the northern neighbour for assistance to lessen dependency with India and take economic benefit. Various MOUs including the agreement on Transit Transport and allowing access to the seaports for third country trade used from various six customs points (Tatopani, Kerung, Kimathanka, Korola, Yari and Olangchunggola and three trade routes Olangchunggola, Kimathanka and Korala and join the Belt and Road Initiative (BRI). Nepal – China Trans Himalayan Multi-Dimensional Connectivity Network, including the Nepal – China, cross border railway, the gateway to South Asia was reaffirmed during the President of Nepal’s visit to China this April in the Second Belt and Road Forum for International Cooperation.  Military cooperation with military training, disaster management, medical assistance, equipments for peacemaking operations, establishment of National Defence University are becoming visible. China has been the largest source of Foreign Direct Investment in Nepal. The agreements focus mainly on seven categories, namely strategic communication connectivity with railways and waterways, energy with hydro projects, power trade, infrastructure development, agriculture, political and diplomatic gestures and security concerns.

Finding a place within China and India will be Nepal’s real strategic challenge and vulnerability in the years or even decades to come, while the diplomatic moves and presumed gains are just a sideshow and a temporary issue along the way.

There are four geopolitical and two political trends for Nepal, one, India and China’s rapid growth in both economy and political influence in South Asia, two, strategic communication network North to South as part of the BRI project will put up with strategic regional linkages, which will uphold security, diplomatic, economic and political consequences, three, variety of transportation system from air, land, rail to waterways and lastly, new approach for economic development through mega projects and increase in energy plants and Foreign Direct Investments. The internal vibrant is, one, Nepal’s political diversification with nationalism is hand and extra-regional and regional influences on national politics and traditional beliefs and two, major transformation to – Federalism, Nationalism, Republicanism and Secularism.

When the new Modi government will be focusing on the immediate neighbourhood as part of the strategic policy; Nepal and India need to work together for regional stability and bilateral economic enhancement, anti-terrorism regional approach, energy security, supply security, disaster management and multilateral strategic connections.

Ten dealings appear to be expressed that will bear geopolitical, geo-economic consequences by: one, protecting the cultural values and religious harmony that both countries enjoy; two, successfully completing the road map for past agreements within a stipulated time; three, detaching the trust shortfall by fulfilling the assurances given by the political leaders and bringing about diplomatic reliability; four, reviewing the 1950 treaty of security and friendship that have been submitted by the EPG that was established in 2016; five, energizing 16 bilateral committees for securing cordial environment in several fields including border disputes; six, dedicated line of supply; seven, effective connectivity by bringing in railways and waterways to Nepali territory; eight, communicating major concerns about comprehensive and strategic issues by Kathmandu-Delhi political engagements and finally a requirement of a core geopolitical mechanism to build sober and reliable intelligence based assessments and forecasts on other key trends of threats to help South Asian nations make informed decisions, identify opportunities and anticipate risks through regional networking including acts of terrorism with bilateral, trilateral and multi-lateral regional associations like the SAARC and BIMSTEC. The need to revitalize the recognition of Indo-Nepal strategic relationship is the need to move into the 21st century, the century for the people of the two countries and the region.

Both the government of Nepal and India must visualize how Nepal will shape and impact India politically, diplomatically, culturally and economically in the next five to ten years so that correct policies and put in order.